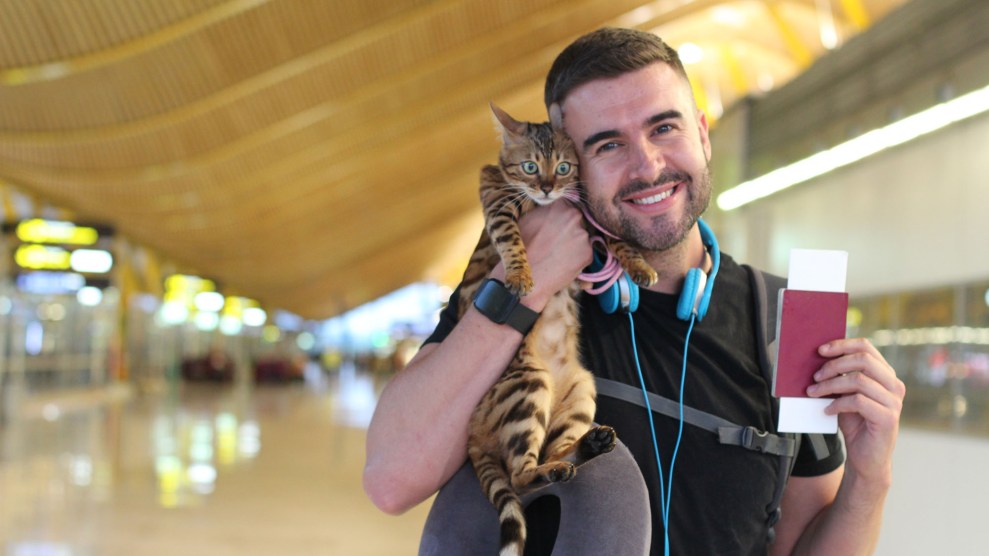 There are few things Americans love more than traveling home for the holidays. This Sunday is slated to the busiest day for US airlines in history, with 3.1 million people flying home that day (overall, airlines expected 31.6 million passengers over the course of Thanksgiving travels this year). But what do Americans love even more than holidays? Their pets, and going to extreme lengths to pamper Fido and Kitty.

In recent years there has been a growing cohort of people who, worried about what might happen to their pets locked in the cargo bay for a two-hour flight, have been exploiting loopholes meant to help disabled people, all so they can travel with their pets onboard flights without putting them in a crate. These are not “service animals,” a truly important class of animals that have been trained to help disabled individuals with specific needs, animals that follow specific government guidelines to comply with the American with Disabilities Act. No, these are “emotional support animals” that provide an unclear resource beyond just making someone feel better. These comfort animals are essentially just normal pets, and they often come with all the unruliness you’d expect of an untrained house animal: Biting, barking, pooping everywhere they go.

For individual businesses, it can be difficult to discern which animals offer real assistance, and which instances are just someone not wanting to leave their dog in the car. In an encouraging sign of humanity’s good nature, most people don’t want to question someone over their disability, so businesses will often avoid prying. In a discouraging sign against humanity, there are plenty of people out there willing to exploit those other nice people.

Back in 2014, Patricia Marx explained this disturbing trend in the New Yorker. “What a wonderful time it is for the scammer, the conniver, and the cheat,” she wrote. To highlight the absurd ways this has become the norm, Marx tested out how people reacted as she trotted around with various emotional support animals: a turtle, an alpaca, a turkey, among others.

Last weekend, the New York Times had an article exploring how people have exploited the rules to such a large degree that veterans’ groups are coming out for changes to clarify the rules, since as false claims of support animals has led to increased difficulties for veterans who rely on their service animals for important, legitimate health needs:

“There needs to be standards to hold people accountable,” said Lori Stevens, the founder of Patriot Paws, which works with Texas prisoners to train service dogs for veterans.

One small dog bit a service dog that was lying under a seat at the gate, causing that dog to be spooked and taken out of commission for its veteran owner, she said. Other veterans have drawn unfriendly looks when they take their dogs into public places.

“We have someone who has had 21 brain surgeries, but if you look at him, you can’t see he has a mobile disability,” she said.

The Times noted that a large group of vet and disability organizations recently sent a letter to the Department of Transportation asking for new, stricter rules clarifying training for animals allowed on planes.

“What about the mental well-being of everyone else?” Marx noted in her New Yorker article. “One person’s emotional support can be another person’s emotional trauma.” I can certainly relate to that. I have decently severe flight anxiety, and like a sane human being I treat that by asking my doctor for a prescription for xanax, not by making life miserable for everyone else sitting on my plane. I’m also not much of an animal lover, so having your obnoxious, poorly trained dog drooling on me or running around the aisles isn’t exactly helping keep my panic attacks at bay.

If you absolutely must fly with your cat or dog for the holidays, just follow the airlines simple rules about carrying your pet in a crate, it really isn’t so hard.