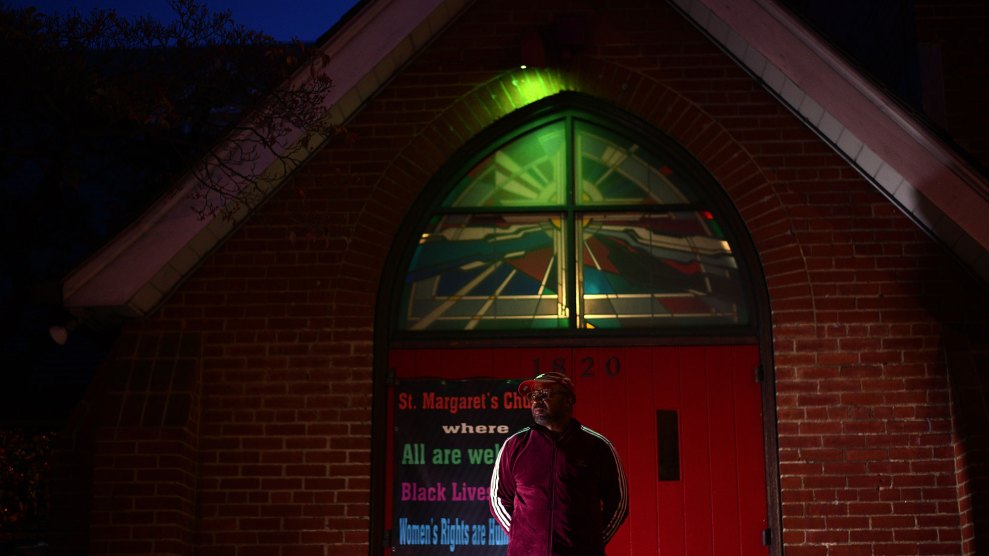 “Your story is not over,” Reggie Cox tells homeless people as he provides a hot meal. The new executive director of the Washington, DC, homeless center Charlie’s Place should know: Six years ago, he had come to this outreach arm of an Episcopal church, homeless himself, looking for a meal.

“Sometimes it’s difficult to think about how you felt at that time,” Cox told the Washington Post. “After a while, I said, ‘I’m sleeping at the ATM machine.’ I thought, ‘This is how low I’ve come.’ I thought of all the other homeless people I would see, passing by them and having conversations with them, and now I knew exactly how they felt.”

Back then, Cox hid his homelessness from his friends and family. At Charlie’s Place, he shared his story. He began volunteering, then became a floor coordinator and a program manager. Cox had lost his job in media monitoring, lost his apartment, and had nowhere to go.

To fellow guests at Charlie’s Place, Cox was compassionate and a calming spirit who understood homelessness, said the Rev. Richard Mosson Weinberg. When searching for a new leader, “it quickly became obvious that we need not look any further than Reggie.”

Saving voters. Georgia is culling hundreds of thousands of people from its voter rolls for infrequent voting. Reporters found 294 people who had indeed voted recently and should not have been placed on the list to lose one of the most important rights of citizenship. Last Thursday, Georgia said those 294 voters will not have their voter registrations canceled. Ohio, another state with a use-it-or-lose-it voter registration, had been set to mistakenly purge nearly 50,000 Ohioans from rolls before its mistakes had been caught. (APM Reports)

“A clear conscience.” To Melpomeni Dina and her two sisters, it was the right thing to do: Secretly shelter a Jewish family of seven in their one-bedroom home during Nazi occupation of northern Greece in World War II. The orphaned sisters split their rationed food with the family, clothed them, and helped them escape into the mountains when Nazis began searching. Last month, Dina, 92, traveled to Jerusalem to meet two surviving members of the Mordechai family—and 40 of their descendants. This burgeoning family, Dina was told, was largely because of her actions. The risk to defy Nazis and shelter the family was enormous, Dina’s daughter, Margarita, acknowledged. She said her mother gained something invaluable: “a clear conscience.” (New York Times)

A snap decision. Georgia nurse Lori Wood had a new patient, a homeless office clerk who needed a heart transplant. But Jonathan Pinkard couldn’t get a transplant unless he had a place to go and a person to take care of him after surgery. After two days, Wood decided to “adopt” Pinkard, a move that floored him. Wood had never done anything like this in her 35-year career. “For me, there was no choice,” she said. “I’m a nurse; I had an extra room. It was not something I struggled with. He had to come home with me.” Post-op, Wood has helped Pinkard with the 34 pills he must take each day, and Pinkard is expected to resume his job soon. (Washington Post)

A telenovela’s power. Uganda is recutting and dubbing a popular Venezuelan soap opera to help promote birth control in its own nation. The country is ecstatic about soap operas and also has one of the world’s highest birth rates, said Gosia Lukomska, director of integrated media at Peripheral Vision International. Lukomska has hopes beyond Uganda for the soap opera, Love & Wealth. “We believe this show will be well received by and relevant to a wide audience on the continent,” she said. (Guardian)

Recharge salutes: More than 650 volunteers in Norman, Oklahoma, who formed a human chain to move books from an old library to its new one across a park; and 7-year-old Kiyoko Merolli, who with her friends demonstrated their First Amendment rights for her birthday party outside the White House on Saturday, hoisting signs like “Batman 2020,” “Homework kills trees,” and “Time’s up for the bad guys.” (Thanks to Tracy Jan for this suggestion).

I’ll leave you with this glimpse of the northern lights in Alaska, via the Interior Department’s Twitter feed. Please send links or tips for possible Recharge items to recharge@motherjones.com. Have a great week, and thanks for reading.

You don’t need to understand the #science behind the Northern Lights to appreciate their ethereal beauty, but just in case: F = qE + qv × B#AuroraBorealis #Alaska @BLMAlaska pic.twitter.com/I0hPre3DUB