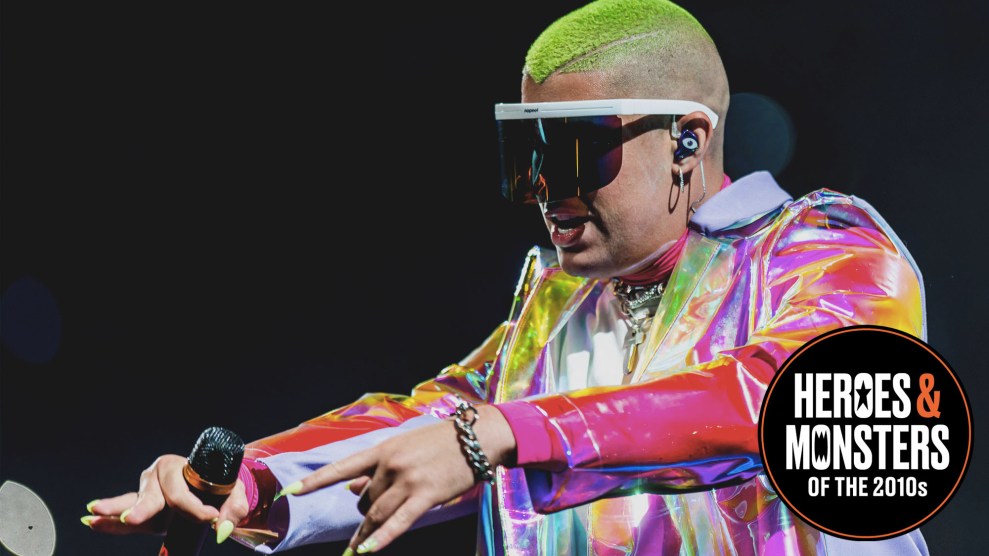 In 2017, when I first heard cars blasting “Soy Peor” in my Brooklyn neighborhood, I didn’t know just how much I would freaking love Bad Bunny. In the last three years, the Puerto Rican trap en Español artist has become a massive superstar. He has collaborated with just about every major reggaetonero you can think of—I could not get enough of Oasis, his album with J Balvin this summer.  (Some US audiences may have first heard him in Cardi B’s  “I Like It Like That” or Drake’s “Mia”. )

Bad Bunny, aka Benito Antonio Martínez Ocasio, is unapologetically himself, even by today’s standards of authenticity and transparency in celebrity. Part of his appeal comes from the way he constantly challenges gender norms in a genre where not many dudes paint their nails. To that end, he believes in nail care for all, putting his platform on Instagram to good use by calling out a “shitty” nail salon that turned him away because he is a man. His streetwear is consistently bold and colorful, and his nontraditional ensembles get attention from fashion bloggers and Vogue regularly. He’s cool, he’s young, he’s fun, and did I already mention I freaking love Bad Bunny?

This year, he called out homophobic remarks made by reggaeton powerhouse Don Omar, saying, “Homophobia in this day and age, how embarrassing, loco.” He paused his European tour to join the massive protests in Puerto Rico alongside Ricky Martin and Residente to call for the governor’s resignation after corruption investigations led to the arrest of multiple high-ranking officials. The unrest intensified after hundreds of private messages showed the governor making misogynistic, homophobic, and disparaging comments about Puerto Ricans, some of whom died as a result of Hurricane Maria.

Bad Bunny’s lyrics are still NSFW; he raps about sex, money, and fame. No surprise there! Don’t @ me about the tired debate over problematic rap lyrics, progress is not linear or binary. But he also sings about seizing the freedom to be whoever the hell you want to be. Listen to “Estamos Bien” or watch his video for “Caro” which begins with shots of him getting his nails done in a pink room before morphing into an androgynous woman. Bad Bunny is a fresh version of what a Latinx trap artist can be, and I’m here for it.

Honestly, when it feels like the world is on fire and reality is a constant state of WTF, I like to put on “Callaita” and take a little break from it all. Bad Bunny eres uno de los héroes de la década. Eh! Eh!