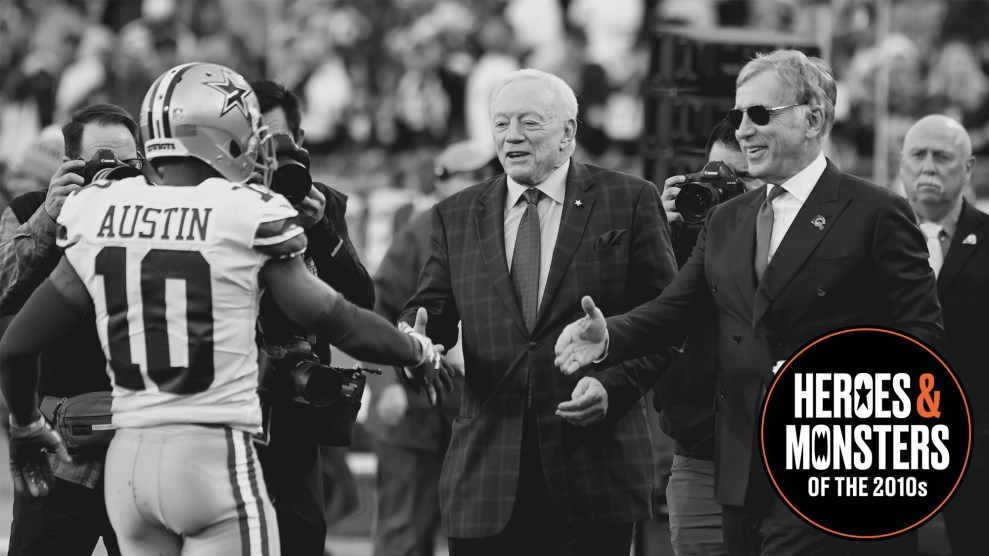 The National Football League spent the first half of the 2010s covering up a cover-up. The league knew that its on-field product was giving its own employees brain damage, but as the New York Times reported in 2016, for years it promoted flawed studies that showed otherwise in order to bury the risk and stave off a reckoning. In fact, the league had even hired some of the same consultants and the same lawyers that the tobacco industry had used to hide the health effects of its own product, in the decades before.

I don’t know if you can really say things got worse from there, because what’s worse than brain damage? But they did not get better; this was the decade that NFL owners were everywhere, and everything they represented was in vogue.

It was the decade that the cult of the owner matured into something grosser and more potent. Their rise was perhaps best characterized by the publication of Mark Leibovich’s Big Game, a portrait of the league not as what it purports to be—men chasing other men, sometimes in snow—but as it really is: a collection of rich old white men who have managed to insulate themselves completely from the world of consequences. It’s not just what the book said—you sort of know already that Jerry Jones drinks Johnnie Walker Blue out of tall cups in his customized bus—but the new power dynamic it represented: the idea that the men in the suites were the real stars.

And they treated the cities that supported their business with the same warmth and good-faith with which they treated their workforce. The Chargers left San Diego for a city that didn’t even want them. The Raiders left Oakland because Las Vegas promised to spend $750 million of the public’s money. When Stan Kroenke decided to move the Rams to Los Angeles, he left St. Louis with a $129 million bill for the now-vacant stadium taxpayers built for him. Robert Kraft visited a sex spa and a bunch of immigrant women took the fall. Washington owner Dan Snyder—who tried to put a revered alt-weekly out business, Peter Thiel-style, for pointing out how much he sucks—hired Laurent Gbagbo’s former lobbyist and George W. Bush’s former spokesman to run interference on his racist team name, and it just sort of made sense.

NFL owners funded Donald Trump’s election. They paid for his inaugural committee. They visited him at the White House. Trump was a USFL guy, not an NFL one—but his arrogance, his boorishness, his grifting, his lecherous-old-man behavior, his love of gratuitous violence, and his self-delusion about his own talents make him an honorary NFL owner. Even when they disagreed with him, they preferred to roll over rather than fight. NFL owners are the avatars of the decade.

Nothing distilled NFL owners to their essence like their handling of Colin Kaepernick. When the San Francisco 49ers quarterback began kneeling during the pre-game national anthem as a form of silent protest against racism and police brutality, owners blacklisted him from the league. A former Super Bowl starter, Kaepernick languished in free agency (he’s still there) as owners chose to sabotage their own chances at winning rather than sign a talented veteran who could fill a need. Kaepernick eventually sued the league for collusion—owners effectively admitted to it—and settled earlier this year.

The league sought to crack down on subsequent protests with threats of fines and suspensions. But when other players, in Kaepernick’s absence, continued to kneel, owners managed to co-opt that by joining them. In doing so, they sanded off the sharp edge that made the demonstration an act of protest, and replaced it with a gauzy, empty “unity.” The NFL stood together for the one thing it truly believes in: nothing.

The image I can’t shake is of Jerry Jones—the face, for so long, of the NFL’s elite—linking arms with his players before a Monday night game. He’s wearing a shiny blue blazer and his fists are clenched, and he’s smirking at the camera for the world to see. This is how it worked in the 2010s. This is what happened when the pressure for change became so great that the people who did not seriously want it were forced to stall for time. They channeled your trauma into Nice Little Moments and then got on with their lives without ever changing a thing.

Twenty-eight to three, though. Hell yeah. We’ll always have that.