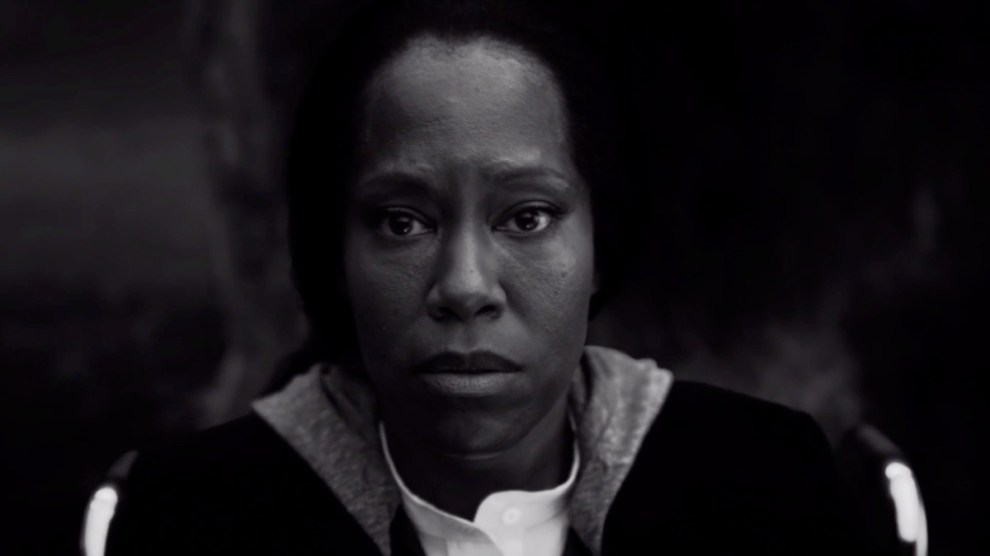 On the day HBO’s Watchmen resurrected a race war, a producer brought a priest onto the set in Georgia to pray with cast members. This was going to be the show’s opening sequence, a depiction of the Tulsa massacre of 1921. White people in Klan attire, on horseback. Black folks getting gunned down indiscriminately. Planes overhead dropping shells along the city’s Greenwood District, which was known as Black Wall Street until it was turned to rubble. The shoot was going to be grueling, both physically and spiritually, and so it required a benediction.

“Asking anybody to recreate this, from the perspective of a victim or perpetrator, almost felt unbearable,” says Nicole Kassell, who directed the series’ pilot. The makers of the show took pains to put people at ease. Damon Lindelof, Watchmen’s creator, wrote a letter of appreciation to the staff. Informational posters were plastered around set as a reminder that the events being depicted really did happen. When she looks back at stills from the show’s production, Kassell sees smiles and relaxed faces between takes, a sign that people felt safe amid their work of recreating one of America’s ugliest episodes, and she’s proud of that. But then she thinks of the young actor who played Will Reeves, a Black boy rushed out of Tulsa during the massacre, and the connection he had with the actors who played his mother and father, who were killed in the riots.

“We were saying goodbye and talking about when he would next be on set for the scene in the field, and then he said, ‘Will my parents be there?’ I just choke up thinking about it. How do you tell this little kid, and why? For every person’s story on that street, there is that moment.

“When you stop and think about that this actually happened,” Kassell says, “it’s hard not to choke up.”

Watchmen, whose first season concluded Sunday, was Lindelof’s “remix” of the 1986 graphic novel written by Alan Moore and illustrated by Dave Gibbons. The two Watchmen share a universe and a handful of characters, but where the existential threat looming over the Cold War–era metacomic was nuclear holocaust, the HBO series unfolds in the shadow of white supremacy.

“The original Watchmen felt like a book of its time,” says Cord Jefferson, a writer for the show. “It was written in the mid-’80s, and the Cold War and Russian saber rattling was on everybody’s mind. The threat of nuclear holocaust was terrifying everybody. That made sense for Alan Moore and Dave Gibbons to put that at the forefront of their comic book. Nowadays, if you are trying to approach the problem at the center of American life, there’s no way you don’t look at the turmoil in America right now and walk away with the conclusion that much of it is race in American society and our fear of Brown people, our fear of Black people, fear of immigrants coming from what the president calls ‘shithole countries.’ If we wanted to work within the spirit [of the original], it makes sense that we made our show about race and racism.”

In a sci-fi comic-book fantasia driven by an alternative history, Watchmen staked its claim on the notion that there could be a universe in which American society repented for its original sins, in which reparations were paid out, in which the country’s foundational superhero was a Black man known as Hooded Justice, in which a God among men—Dr. Manhattan—took the form of a Black man in love with a Black woman. Watchmen was indeed about race and racism, but its genius lay in how it was about race and racism. Its writers, under Lindelof’s guidance, refused to diminish its cruel, violent realities for the sake of their white audience. It was a story about racist terror and its intergenerational effects, told through the eyes of Black characters and not indexed to the sensitivities of white viewers.

For Watchmen to take that risk of telling the story of Black trauma through the eyes of Black people, the show’s creator and writers needed to go back to an authentic act of racial violence against Black Americans. Lindelof hadn’t heard about the 1921 pogrom in Tulsa, which historians say left up to 300 dead, until he read Ta-Nehisi Coates’ essay for The Atlantic, “The Case for Reparations.” Kassell hadn’t heard about the massacre, either, when Lindelof approached her to direct the pilot. After she read The Burning, one of several books about the riots, she and her colleagues went to Tulsa and visited the Greenwood Cultural Center, which keeps photographs, newspapers, and oral histories from the era. She wanted to depict the massacre as “truthfully as possible.”

“I was appalled that I didn’t know about it,” Kassell tells me. “It was just another moment where another piece of history and story in this country had been actively eradicated…I felt this shame of not knowing, but really, it’s a shame on the system that has not told these stories.” Jefferson, who is Black, knew about the Tulsa massacre. After the pilot aired, he was “taken aback at how many people had not.” He says, “A lot of people thought we had fictionalized that.”

Black trauma is at the core of the show, and so is its forgetting. Viewers meet Will Reeves first as a boy, and then as a wheelchair-bound elderly man in the present day who claims he’s hanged Tulsa’s white police chief. Over the course of the series, Reeves’ story unspools. We learn that after fleeing Greenwood, Reeves eventually became a cop and soon after that a vigilante superhero. Wearing a mask and a noose around his neck, the areas around his eyes painted white so people don’t realize he’s a Black man, Reeves was Hooded Justice, America’s first masked hero.

His story is bookended by that of Angela Abar, who finds out she is Will’s descendant only after she submits a DNA sample to a historical center that tells her she’s qualified for reparations. Until that moment, viewers know her as Sister Night, the masked vigilante enlisted by Tulsa cops to suppress the rise of masked white supremacists.

In the show’s remarkable sixth episode, Angela falls into a stupor after she consumes an unhealthy dose of Will’s so-called Nostalgia pills, which allow people to relive their past memories. “It’s dangerous to take someone else’s Nostalgia,” Angela is told. In her overdosed state, she follows in her grandfather’s footsteps as he becomes the rare Black cop on the police force, as he nearly gets lynched at the hands of white officers, and as he fashions himself into the first Black superhero.

Jefferson co-wrote the episode with Lindelof. He says they were focused on the idea that “racial trauma of the past has repercussions” today. “It’s a reality for many people of color in this country and around the world,” he tells me. “I feel close to that material. I feel that trauma from the trauma that my father held onto.”

In a writers’ room packed with women and voices of color, there was a debate about how to depict the violence of the attempted lynching, about how raw it should be. Lindelof wasn’t comfortable with the officers using the N-word, though Jefferson and others prevailed on that score. “We didn’t want to pull any punches,” Jefferson says. “We didn’t want to be flippant with the material. We wanted to show the realities of what happened. Will’s lynching didn’t actually happen, but it did happen to a great many people. We wanted people to be in the perspective of somebody who that was happening to.”

It isn’t just Will’s perspective, though—and that’s the episode’s coup. It is Angela’s perspective, too. We’re watching Angela watch Will, watching her inherit the scars of her grandfather’s experience. Here was a twist on the depictions of racial violence we’ve grown accustomed to. The violence against a Black man wasn’t being served up for a white audience; it wasn’t designed to prick the conscience of white viewers or appeal to certain of their underground desires. With its layered perspectives, the scene told a story about the way that white supremacist terror reverberates across generations. We were watching the bequeathal of trauma.

Will survives the lynching attempt, of course. He is shaken, but his yearning of justice is bolstered. But Will’s path as a Black hero follows a familiar narrative: His white vigilante comrades, known as the Minutemen, suppress his desire to fight white supremacy, preferring instead to take on a more traditional comic-book foe.

“The real tragedy of Will’s life is that he’s been looking for justice forever since he was a little boy,” Jefferson tells me. In fact, the series opens with Will at Tulsa’s Dreamland Theatre, watching a silent film starring his idol Bass Reeves (a real-life US Marshal). “There will be no mob justice today. Trust in the law,” the younger Will repeats. The moment is intended ironically. Will cannot extract justice from the traditional justice system, so he finds it another way. So does Angela.

The trauma Angela experiences through her grandfather changes her. It sticks with her just as the memories of racial terror stays with the descendants of the Tulsa 1921 massacre. A century later, in real-life Tulsa, a group of archeologists has found “anomalies” at two possible sites that could point to mass graves in the city. The past has yet to be unearthed. Watchmen was a reckoning with our collective unreckoning.

“The hood, when I put it on, you felt what I felt,” Will tells Angela as the season comes to a close.

“That’s what I thought, too,” Will says with a pause. “But it wasn’t. It was fear and hurt.” Angela breaks down in tears. “You can’t heal under a mask, Angela,” he tells her. “Wounds need air.”