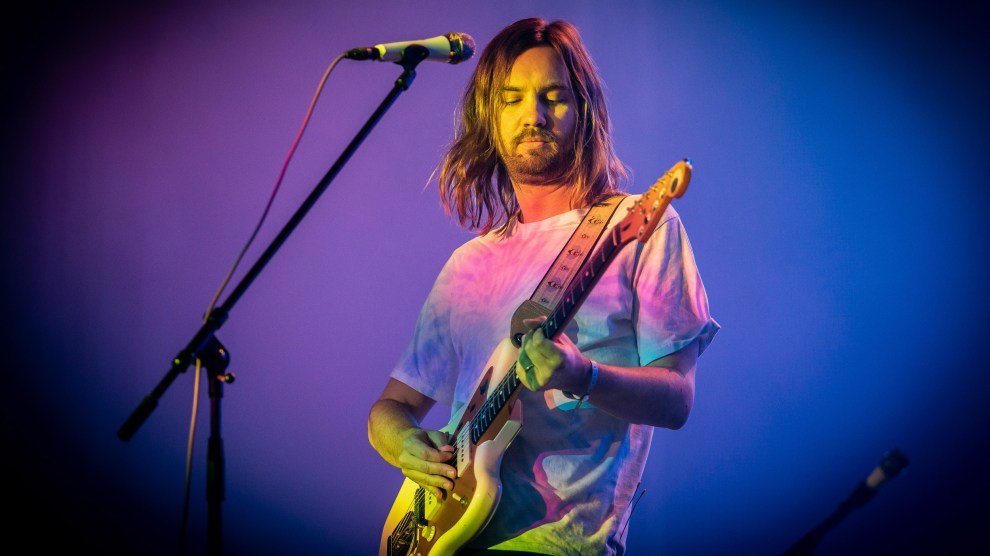 Maybe that association is an accident. But I find it fitting that a wisp of memory common to anyone who used a PC in 2000 mingles on the album cover with a scene of the natural overtaking the barriers of civilization—and nearly perfect that through the window in the corner the scene of destruction repeats infinitely.

The Slow Rush is one of the first albums that feels like listening to how we live in the age of climate catastrophe.

Parker offers a synth-driven, reverb-heavy meditation on time in an era where our past is catching up with us. He conquered radio waves worldwide five years ago with his neo-psychedelic album Currents. It featured a vortex cutting forward on the cover, implying a focus on the individual charging toward a new world. Now, here we are: the new world is broken.

Parker wonders what to do with himself. The first verse of the first song on the album, “One More Year,” asks, “Do you remember we were standing here a year ago?” The repetition becomes mundane and childish: “We’re on a rollercoaster stuck on its loop-de-loop.”

Throughout The Slow Rush runs the surety that climate change will alter our perception of the arc of our lives, that a new world will dismantle the regenerative comfort of cyclical time, that we’re now on a linear path that can only result in doom. Yet it’s a bouncy record, like a moment of laughter in spite of the coming hellscape.

As the album progresses, Parker insists that the cyclicality must end—and that climate change will end it. On the second track, “Instant Destiny,” Parker ponders making “something permanent,” like a home in Miami or a tattooed name on his arm. But we know that Miami will drown beneath rising tides, that tattoos are still attached to flesh. The theme of the destruction of both body and planet becomes obvious on “Tomorrow’s Dust”: “Sympathy for the fauna / Fragile life in the sauna / In the sea getting warmer / Endlessly ’round the corner.”

The seasons we once trusted have now become subdued. Weather patterns blend like the lazy synths that unify the 12 tracks on The Slow Rush. “Something doesn’t feel right,” Parker sings on “It Might Be Time.” “There I go, blame it on the weather.”

Our plans for the future become tenuous. Tame Impala, no longer the upbeat, Beatles-esque radio fodder of yesterday, has changed with the times.