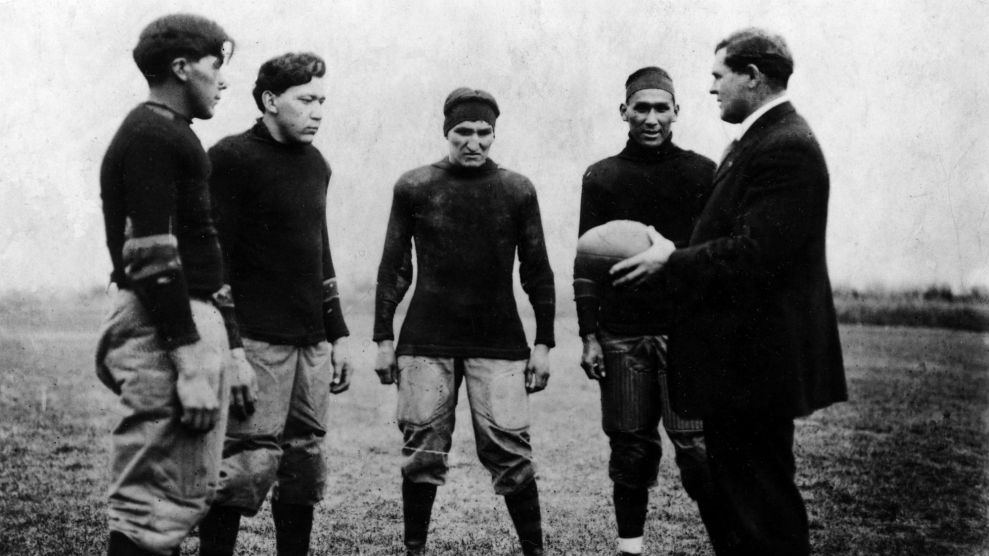 On Sunday, when the Kansas City Chiefs and the San Francisco 49ers meet on the field for Super Bowl LIV, at least some headdress-adorned Chiefs fans in the stadium will be chanting and tomahawk-chopping their way through the team’s first appearance in the big game since 1970. They will do this over the objections of Indigenous activists who have spoken out against the team’s appropriation of Native imagery.

Football is suffused with the folklore of  America’s violent frontier expansion.

On the other side of the stadium in Miami Gardens, Florida, fans will be wearing the scarlet and gold of the 49ers, a team name that likewise evokes American frontier history. The California Gold Rush ushered in a wave of violence and destruction for the original inhabitants of the land at the hands of the white settlers.

Football, a sport that rose to prominence as the western frontier was closing, is so suffused with the folklore of the country’s violent expansion that even today, more than a century later, the dominant motif is still “palefaces vs. redskins.” Casual fans know that American football culture has always had a deep and complicated relationship with Indigenous Americans, as the regular protests over mascots and nicknames can attest. But that understates things. Football as we know it would not exist without the contributions of Native Americans. And while they’ve been relegated to the sidelines of the story the sport wants to tell about itself—a mythology built on the image of the white All-American hero—Indigenous Americans from the start have used football as a tool of identity formation in the face of white supremacy.

“They were the original student-athletes,” said Dr. Beth Eby, a historian and postdoc fellow at the University of Texas. “Through intercollegiate play, and through the publicity of the boarding schools, that really helps solidify football as this mainstream national pastime.”

The most famous of the boarding schools was the Carlisle Indian School in Pennsylvania, a federal boarding school established in 1879 with the explicit goal of assimilating Native children into white society. The descendants of great leaders from various Indigenous nations were sent to Carlisle to be stripped of their culture, in accordance with founder William Henry Pratt’s creed, “Kill the Indian, save the man.”

Football in those days was largely the domain of elites at places like Harvard and Yale, a way for American men to prove their masculinity now that there was no more territory left to conquer. But by 1912, one of the nation’s best teams could be found at Carlisle. For Pratt, the sport proved to be the ultimate PR tool; The strong, healthy athletes on the gridiron were proof of his “civilization” project’s success. They were also a curious spectacle. Fans and donors flocked to Carlisle to watch Glenn Scobey “Pop” Warner and his band of Carlisle Indians compete in the white man’s game.

Football culture has always had a deep and complicated relationship with Indigenous Americans.

The Carlisle team revolutionized the game with their style of play. Every forward pass Pat Mahomes and Jimmy Garoppolo throw on Sunday will owe at least something to the innovations of Pop Warner’s teams. By playing to their strengths, they helped transform the game from one of brute force and mass momentum into a contest won by speed and cunning. For the students themselves, football—and the success they found in it—meant something else entirely.

“It was kind of a way of survival for a lot of students,” said John Bloom, a professor of history at Shippenburg University. His book To Show What an Indian Can Do: Sports at Native American Boarding Schools chronicles the history of sports at Carlisle. Football “was something that students could adapt to their own purposes.”

In the eyes of the school’s administrators, the Carlisle boys were “Indians” in much the same way Kansas City players are “Chiefs” now—not an ethnic identity so much as a mascot, a marketing ploy, an exoticized “other” to pit against the palefaces. As historian Michael Oriard points out, the absence of a conspicuous other in the very early days of football had covered up the sense of racial destiny at the heart of the sport. The subtext became text with the Carlisle teams. “Wily, wiry redskins from the fortress of Carlisle went on the war path this afternoon for the sons of Eli,” read one account of an 1897 game between Carlisle and Yale. “Puritan and savage came together in a new and modernized phase of the Indian question…So paleface warred with redskin from after the dinner hour until the going down of the sun.”

But the explicit racialization of the sport had the ironic effect of encouraging racial consciousness among Indigenous athletes. The players began to develop a serious racial identity in the shadows of the one being thrust on them. Race, history, and pride were at stake when they played all-white opponents—the Army teams, for instance, whose rosters were full of the sons of the officers who had destroyed the Carlisle Indians’ ancestral lands.

“Boarding schools brought all of these different people together, and they formed this shared identity that ultimately became de-colonial,” said Eby. “Sport was really important in doing that because it brought different communities together, but it also afforded Native peoples to feel pride in their own individual nation.”

Indigenous athletes developed a serious racial identity in the shadows of the one thrust upon them.

Perhaps the most important symbol of this pride was Jim Thorpe, a Carlisle student and member of the Sac and Fox Nation who was once called the “greatest athlete in the world.” After being named All-American at Carlisle twice, Thorpe would go on to become an Olympic gold medalist, excel in basketball and baseball, and become the first president of the American Professional Football League, later known as the NFL.

Thorpe was widely recognized for his exceptional athletic ability in his day, but the accolades he received were marred by the racism that pervaded sports. The mainstream sports press alternately characterized him as the hot-blooded redskin or noble savage as it suited their narratives. Thorpe wasn’t allowed to be fully American (literally—Natives were considered wards of the government until 1924 when they were granted full citizenship) and never celebrated in his Indigenous identity beyond dehumanizing tropes.

Among Indigenous Americans, however, Thorpe remained an important figure well beyond his death in 1953. Nearly everyone I interviewed for this story mentioned him. Since Thorpe’s day there have been dozens of professional football players claiming Indigenous ancestry, including the Chiefs’ James Winchester, who is from Choctaw Nation.

Within Indigenous communities, the sport continues to be an important tool to celebrate identity and community. Bennae Calac is the founder of the youth nonprofit 7G Foundation, which hosts an annual “Indigenous Bowl,” inviting football teams from reservations and Native communities across the country to compete in southern California. Calac says she created the organization in response to the lack of opportunity afforded Native youth by larger college and professional football organizations.

“The Indigenous Bowl was created to help our communities be seen as great athletes, but also have people understand that the strength behind us is our culture and who we are. It is our identity,” said Calac. “We want to show that we’re just as good as everybody else. But it’s not to show everybody, it’s for ourselves.”

Don Wexel, the director of Montana Indian Athletic Hall of Fame, says it’s important for Indigenous youth not only to know the legacy of athletes who came before but to participate in sports themselves. Football could still be for the young Indigenous athletes of today what it was for the Carlisle boys of the previous century. “It allows our youth to just be who they are,” Wexel said. “We don’t have to fit into their vision of how we need to be.”

The only legacy the NFL would have for Native peoples in football, meanwhile, is offensive and ahistorical. Take the Chiefs’ tomahawk chop — fans only began slicing their arms through and wailing the “war chant” in the 1990s, encouraged by a head coach who’d seen a similar performance from the Northwest Missouri State band, which was itself derived from the chop done at Florida State University. Since its inception, the chop has been a hazy paleface notion of what “Indians” do, never an actual historical homage.

“When they were all dressing up like Indians…Native kids were hit, abused, ridiculed for speaking their language.”

Vincent Schilling, associate editor of Indian Country Today and a member of the St. Regis Mohawk Tribe, has been one of the most outspoken critics of the Chiefs. He explained in an interview why he finds the appropriation so hurtful.

“When they were all dressing up like Indians, and everyone wants to be an Indian, at residential schools Native kids were hit, abused, ridiculed for speaking their language or being an Indian in any way, including my grandmother. So people say they honor me? I don’t look at dressing up like a fake Indian as an honor.” Schilling says he wants football fans to recognize this history, and at least be open to change.

“All I really do ask is for you to listen. It is possible to have civil conversations and, and have conversations that maybe you can kind of share some sentiments of understanding.”

Football history cannot be extricated from US history, but neither can it be teased apart from Indigenous history. As individuals and as a collective, Native peoples have not been mere symbols, but actors shaping the history of the game, and using the game within their own histories.  Their relationship to football does not begin and end at the question of who gets to wear a headdress at a game, but let it not be mistaken that Indigenous people are in fact the ultimate arbiters of this question. Not Daniel Snyder or Clark Hunt.  Indigenous Americans were the original inhabitants of this land and some of the original innovators in football. The sport belongs to them as much as it belongs to anyone.