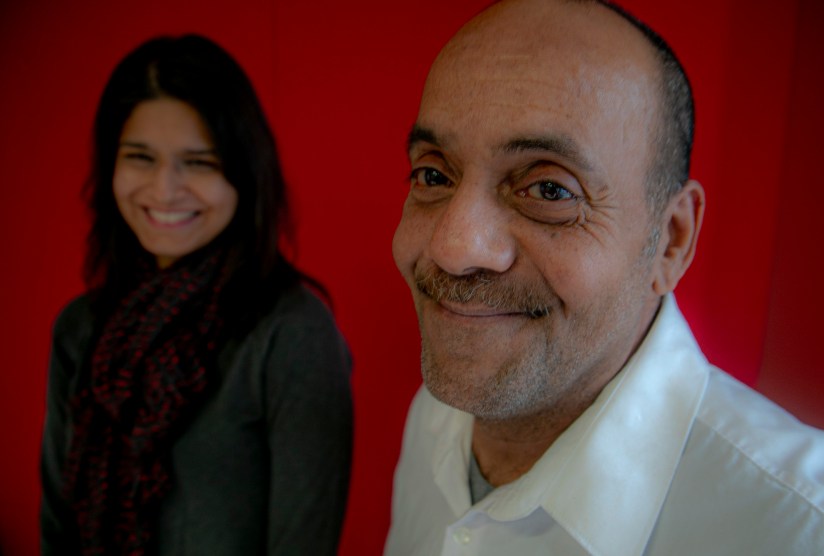 Rafael Ruiz, exonerated of a rape charge that sent him to prison for 25 years, with his lawyer from the Innocence ProjectBebeto Matthews/AP

He could have gotten out of prison years earlier. But he wouldn’t take a plea—because he didn’t do the crime.

Last week, after 25 years behind bars and 10 more years outside of prison shadowed by his unjust “record,” a judge in New York vacated Rafael Ruiz’s rape conviction in light of DNA evidence exonerating him. Ruiz had been convicted despite the fact that he did not match the description of the attacker.

If he would have pleaded to a lesser charge, he would have been out in three years, he was told. That’s the coercive calculation that leaves many innocent people with a criminal record, unable to vote in many cases, and tarnished as they search for jobs.

“I was thinking about my freedom all the time I was in there, the best way I could,” Ruiz said. “I didn’t want to take no deal, because I’m not a criminal. I’m glad I ain’t took no bid, I’m glad I tried to prove my innocence, I’m glad people came along and helped me.”

To Ruiz’s sister, Maria, the exoneration means the two of them can “walk together with no shame in the street now. We’re able to go to the beach and show our face. We don’t have to hide under dark glasses and big umbrellas.” (NY Daily News)

Improving the United States, one building at a time. John Henry Boalt called Chinese people unassimilable liars, murderers, and misogynists. He pushed the Chinese Exclusion Act of 1882, the first US immigration ban on a specific group of people. Last Thursday, after protests at the University of California, Berkeley, Boalt’s name was taken off a law school building. For student Ryan Sun, the removal couldn’t have happened too soon. Walking into the building without Boalt’s name, Sun said, gave him “a sense of closure.” (Los Angeles Times)

An angel, punished. Emily James was a senior official at a US Bank call center. On Christmas Eve, a caller from a nearby gas station said he’d deposited money in his account but couldn’t draw on it to pay for gas or Christmas presents for his two kids. James checked; he was right. She couldn’t fix the problem immediately, but she got permission from her boss to take a break, drove over, and gave him $20 of her own money. It was the kind of thing you see on bank commercials about employees going the extra mile. But US Bank fired James. And her boss, too. James has been reduced to selling her blood plasma for money. Three articles from the Oregonian and a New York Times column by Nick Kristof prompted a widespread outcry—and Saturday night calls from the bank’s CEO to James and Kristof. The CEO accepted responsibility for what went wrong, telling Kristof, “I will fix this.” Stay tuned. (New York Times)

Respecting the heart. For nearly half of his life, Mike Cohen had been plagued by cancer, a heart attack, and chronic heart failure. Then, in February 2018, he got a new heart, one that had belonged to James Mazzuchelli, a Navy flight surgeon who’d died in a helicopter accident. Mike got stronger in cardiac rehab after the surgery, developed a fondness for pizza, and hatched a bold plan: He would bike cross-country, from San Diego to Jacksonville, to pay his respects at the grave of his heart donor. He wrote to James’ mom, Christine Cheers, who met Mike at the gravesite when he pedaled in. She hugged Mike. And got a stethoscope to hear his heart, James’ heart. (Bicycling)

I’ll leave you with a stunning sunset over Virginia’s Shenandoah National Park via the Interior Department’s Twitter feed. Have a great week ahead!