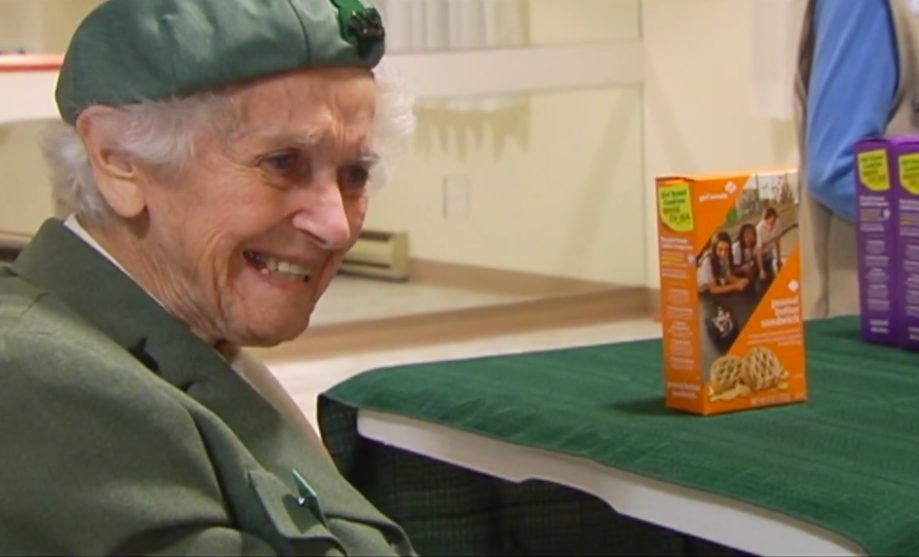 When Ronnie Backenstoe started selling Girl Scout cookies in the 1930s, they came in just three varieties and cost about 15 cents a box.

At 98, Ronnie—a scout leader and volunteer—says she’s happiest selling Girl Scout cookies alongside younger scouts, wearing her olive-green beret. But don’t be fooled—beyond her love and craving for cookies is a challenging, energetic teacher who has mentored, inspired, and motivated scouts worldwide, imparting words of wisdom and life lessons in the face of challenges across communities and generations, eastern Pennsylvania’s WFMZ reports.

The 98-year-old’s fellow scouts seek out Ronnie’s help and spirit of exploration that’s led scouts with her to Jamaica and Switzerland. “Her stamina, her energy, her mind, she’s nonstop,” said troop leader Barbara Allen Perelli.

At a time of coronavirus concerns and market plunges, Recharge cheers a scout who has stayed steady and focused on developing women leaders throughout the Great Depression, World War II, the threat of nuclear war, the wake of 9/11, ongoing conflicts in Iraq and Afghanistan, and countless other challenges that test the core of a community’s ability to come together.

A voice of reason. Seventh grade teacher Angela Sheffield had a wakeup call about COVID-19 in early February, when a student coughed and another yelled, “Coronavirus! We’re all going to die!” At that moment, Sheffield, a teacher for 27 years, knew she had another assignment: Provide accurate information about the outbreak to her young students. “Misinformation can lead to stress, and stress can make it harder for children to learn,” the Indiana teacher says. She developed a chart to students about what we know, told them about the importance of challenging stereotypes and refraining from derogatory comments and conclusions. She was transparent and honest about her fears—that the school might close if the outbreak hit their community. After every statement, she reassured students that, for now, they were going to carry on as usual, and she repeated: Education is the key. (Chalkbeat)

Helping others. Eric and Erica Threlkeld don’t have diabetes, but they have traveled abroad to get low-cost insulin for Americans in dire need. Eric’s first trip to Mexico was for a family with a 9-year-old boy whose medications cost $550 a month; Eric got it for one-tenth that price. Since then, the Utah couple has made more trips and established a charity to help. “People in our country are being held hostage over the high price of insulin and other medications,” Eric says. “If nothing else, we’re hoping that by starting the foundation, we’ll be bringing some awareness for change.” (Washington Post)

He found him in the kitchen. Filmmaker Doug Roland needed an actor who is both deaf and blind for his short film and wanted someone with a mischievous sense of humor. He interviewed about a dozen prospective actors at a Long Island center for people with disabilities when someone suggested he look in the kitchen. Robert Tarango, 55, who has worked there for years, was perfect for Feeling Through, the 18-minute film released late last year, and the director and actor have given talks after showings. The effusive, charismatic Tarango, who lost his sight in his 20s from a rare genetic condition, grew up idolizing John Wayne and Henry Fonda. Now, decades later, he is challenging himself in this new direction. “Maybe,” Tarango says, “I could transition to become an actor” fulltime. (New York Times)

I’ll leave you with this blue view of Oregon’s Crater Lake National Park, via the Interior Department Twitter feed. Have a great week ahead!