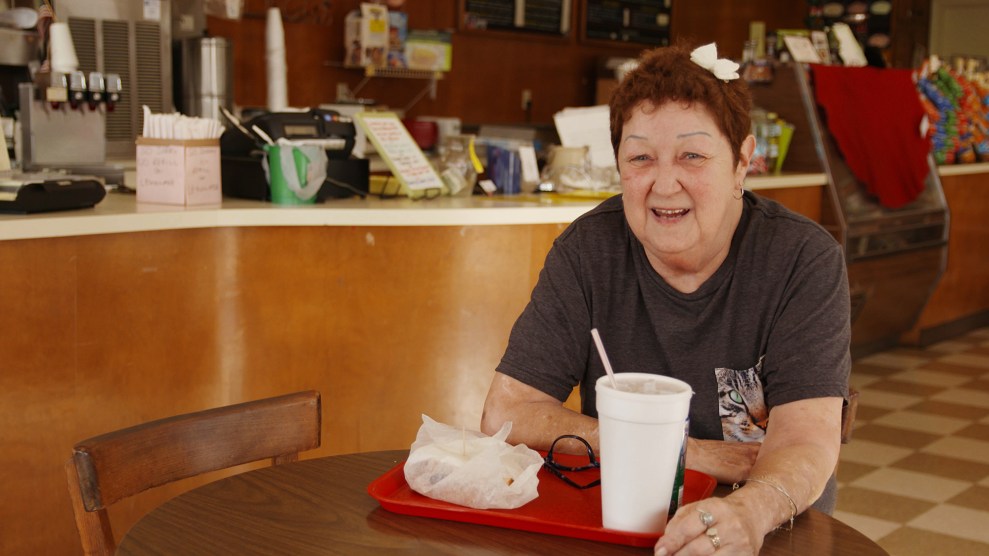 Norma McCorvey in "AKA Jane Roe"FX

Toward the end of the new documentary AKA Jane Roe, when Norma McCorvey (Jane Roe of Roe v. Wade fame) makes a self-described “deathbed confession” that she never truly converted to Christianity—she was in it for the money, and there was quite a lot of it—I had to press pause, remove my headphones, and stare at the wry smile on her desiccated face, slowly digesting the weight of her admission in a moment where the right to abortion care is back before the Supreme Court.

“If a young woman wants to have an abortion—fine; that’s no skin off my ass,” quips McCorvey from a nursing home in Katy, Texas, recanting her insistence from the mid-’90s that she had been “born again” and was dedicating herself to unraveling abortion rights.

I had to press pause, remove my headphones, and stare at the wry smile on her desiccated face, slowly digesting the weight of her admission.

Her reversal has long been heralded as a major victory by anti-abortion advocates, one that has been used as a potent weapon by groups like Operation Rescue for more than two decades. When executive director Nick Sweeney set out to make the film, he was drawn to McCorvey’s already-apparent contradictions, but he wasn’t expecting another, certainly not of this magnitude. “Sitting across from her when she was saying those things, I was astonished,” Sweeney tells me. (Sweeney, I should note, is the partner of my colleague, deputy editor James West.) “I was as shocked as I think the audience will be watching it. I never expected [the film] would go in the direction that it did; I was bewildered in those moments.”

If you followed the press coverage this week, much of America felt the same—though the reaction to McCorvey’s confession that struck the most powerful chord with me came from NARAL Pro-Choice America president Ilyse Hogue: “This is an extreme example of precisely why we do not base rights on individual experiences and feelings.” In that tweet, she hit on something that consistently lingers in the background of the film, something that I keep coming back to when I think about McCorvey: There is an inherent danger to centering an individual person in a struggle for the rights of many. To this end, AKA Jane Roe, which officially comes out Friday on FX, is something of a parable.

For most of the American population, the Roe v. Wade case has become shorthand for abortion rights and access, and, for a while, the complicated, enigmatic woman at its center, Jane Roe, was its off-kilter heroine. Of course, that was by design—when attorneys Sarah Weddington and Linda Coffee were searching for a plaintiff, McCorvey fit the bill. “They needed a poor woman who could not afford to travel to one of the states where abortion was legal,” explains Charlotte Taft, an abortion counselor, in AKA Jane Roe. “She was the person who really fit all the criteria that they needed.” She served a purpose within a legal system, but this didn’t allow any room to consider her as a human being.

She was a woman who simply wanted an abortion but was ultimately denied that right. “Jane Roe,” though, ignored everything else about her. “She defied expectations at pretty much every point in her life, and I think she found that kind of liberating,” Sweeney says. McCorvey was an out lesbian in a part of the country that is known to be hostile to non-heterosexual relationships, yet she had sex with men. She never had an abortion, but she was an icon for abortion rights. She dedicated herself to that battle up until the moment she turned on her heel, doing considerable damage to a movement that she had previously fought for.

She served a purpose within a legal system—a crucial one—but this didn’t allow any room to consider her as a human being.

“She was clearly such a survivor,” Sweeney notes. “She had this primal instinct, and I think that comes through in the film where she says, ‘I’m just looking out for Norma’s salvation and Norma’s ass.'” It’s very hard to fault her for that, this woman who faced poverty and abuse and discrimination, who was denied health care that she needed, who made a sacrifice of her body and her spirit in becoming Jane Roe.

But that’s also what left the pro-choice movement so vulnerable, why it was such a blow when Norma McCorvey was no longer “Jane Roe.” As Robin Marty, author of Handbook for a Post-Roe America, pointed out in a 2017 piece reflecting on McCorvey’s legacy for Dame magazine, McCorvey was used by both the pro-choice and anti-abortion movements. She had a ninth-grade education, so she was not an obvious choice for the spotlight during pro-choice rallies—which was even more of an issue when she admitted to lying that she was raped in an attempt to get an abortion legally in Texas. “Even once she did try to make abortion rights her issue it seemed that some were determined to shove her to the side, the reality of McCorvey not nearly as pliant and agreeable as the pseudonymous ‘Roe,'” Marty writes. “She was purposefully held out of the spotlight, just to have everyone drop her name into their press releases only when she was no longer able to speak for herself.”

There’s a scene in AKA Jane Roe in which a local news segment covers a shooting at McCorvey’s home in advance of an abortion rights rally in 1989. Buckshot freckles her simple wooden door, and she appears onscreen, shaken but clearly angry, explaining that now she has to stay in a different hotel each night for her safety, never mind that she couldn’t afford the expense. When she agreed to be the plaintiff in Roe v. Wade, she was a low-income woman who wanted control over her own body; she could not have imagined the magnitude of the repercussions. Being Jane Roe was not an easy path, nor was it a lucrative one—she made her living cleaning homes—at least until the religious right came calling. Moreover, the role came with an emotional cost. “I can’t see how it wouldn’t be traumatizing,” Sweeney says. “It’s such a huge amount of attention and scrutiny.”

“She was clearly such a survivor. She had this primal instinct, and I think that comes through in the film where she says, ‘I’m just looking out for Norma’s salvation and Norma’s ass.'”

“She had a tough life before she became the plaintiff, but I think certainly, there are a lot of sacrifices and burdens that she bore throughout her life after the case,” Sweeney adds. It’s in this context that I’ve been pondering (and pondering and pondering) her deathbed confession.

The Supreme Court is due to rule any day on another monumental case involving abortion rights, June Medical Services v. Russo. As I’ve previously reported, the case involves a procedural issue known as third-party standing, which allows providers to act as plaintiffs in abortion cases rather than forcing individual women to bring suit as Jane Roe once did. It’s eerie to watch the film as an echo of what may come to pass again.

But that’s also why you should watch. AKA Jane Roe is a powerful look at what taking on that role can mean for a person’s life; it’s not an easy path to choose. McCorvey spent most of hers caught between two causes, and she was gobbled up by their agendas. But Norma McCorvey was a human being; Jane Roe was a two-dimensional symbol. Let’s not confuse the two.