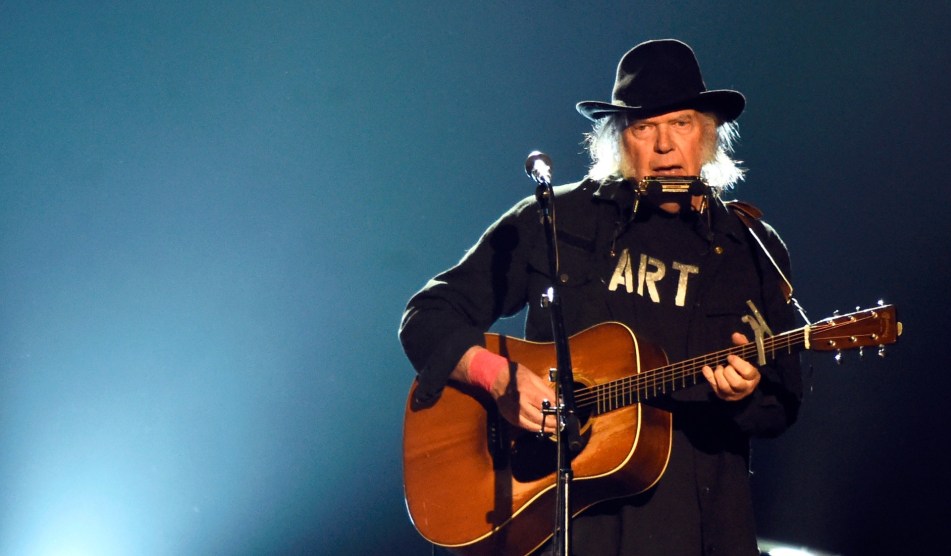 Earlier this week, on August 4, the Hollywood Reporter was the first major media outlet to report the news that Neil Young is suing Donald Trump for playing his songs at campaign rallies. It has become a major news story since then. When I checked this morning, it was still trending. But the story was first hinted at by a smaller paper, The Neil Young Times-Contrarian.

The NYA Times-Contrarian does not have a regular publishing schedule, style guide, or clear purpose. It’s a fake newspaper (kind of?) on neilyoungarchives.com (a vast archival project that includes Young’s music, extensive notes on each song/album, and primary documents from his career). Young mostly uses it like a blog. On July 27, the Contrarian had a new “message” from Neil: “I am changing my mind about suing President Trump.” On Wednesday, the suit was filed and the complaint posted as an upload on the site.

The details of this lawsuit are less fun than you’d hope. Whether musicians can stop campaigns from publicly playing their music is a potentially interesting question on its face, but researching it leads to dull answers. It’s basically about inane legal issues involving licensing and copyright that have not been fully tested in the courts (because artists would rather signal public disdain with cease and desist letters than waste money actually suing politicians).

The gist is that the American Society of Composers, Authors and Publishers owns the distribution rights to Young’s music. The distributor has a political opt-out clause in which an artist can say they would not like certain songs played at political gatherings. ASCAP told Rolling Stone Young has used that opt-out clause to say his music cannot be used at Trump’s events. But Trump is still using the songs “Rockin’ In The Free World” and “Devil’s Sidewalk” at his rallies. But litigating that, though, will take time. There could be questions about if venues (instead of the campaign) has a similar contract. By the time it’s decided, the election could be over.

Like much of Young’s late-career work, there is an arch politics here that is both endearing and a bit corny. It is in line with the work of an artist who has released a 10-plus minute song about nature (“She Showed Me Love“), an entire album about Monsanto (and a film!), an almost 10-minute song about nature (“Be The Rain,” on Greendale, a narrative album about a climate activist), and just put out “Lookin’ for a Leader” about Trump. So, yeah, it’s probably a bit over the top.

But, more importantly, it’s a massive middle finger to anyone Neil Young doesn’t like.

This is the guy who, after becoming the biggest rock star in the world with his record Harvest (#1 on the Billboard charts, the smash hit “Heart of Gold”) famously “headed for the ditch.” He released a trilogy of albums that were incredibly dark and unpalatable to mainstream audiences. One was recorded with Cajun legend Rusty Kershaw, who gave the band drugs so potent that they all needed B12 shots to pep up; one was just live recordings of new songs Young never bothered to go into the studio to record; another was about his guitarist’s drug overdose on the day Young fired him from his backing band. Neil Young is going to do whatever he wants, his way. And, as an ardent fan, I just am here for the ride.