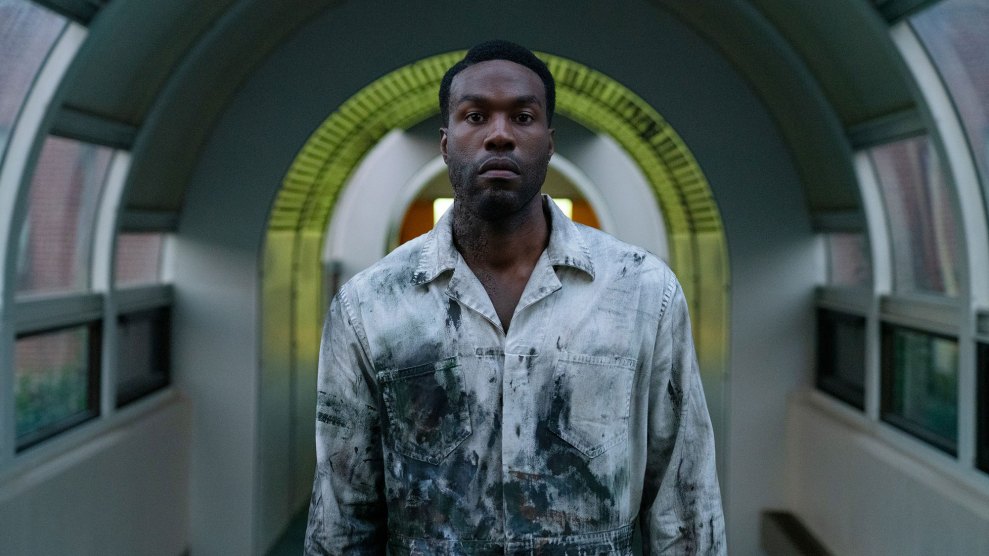 In Clive Barker’s short story “The Forbidden,” the precursor’s precursor to the Nia DaCosta–directed, Jordan Peele–produced Candyman, an academic named Helen becomes obsessed with capturing the grim conditions of the Spector Street Estate, a British slum marked by the malignant scent of urine, burnt plastic, and graffiti—an area “indisputably foreign, sealed off in its own misery.”

Class is the specter, or the other specter, haunting Barker’s story, part of a collection he wrote known as the Books of Blood in 1984 and 1985. Helen is an inquisitive student from the upper orders, pestering her professor boyfriend at a restaurant in between stints at the estate, snapping photographs of the slum’s decrepit condition, and interrogating residents about the recent spate of deaths occurring on its grounds. She marvels at the stories residents tell themselves about the mysterious figure behind the slayings, the Candyman. Like others before her, she eventually falls victim to the estate and, ultimately, to Candyman’s allure.

The basic elements of the thriller have stayed in place as it’s moved from Barker’s pen in 1985 to Bernard Rose’s camera in 1992 and eventually to DaCosta’s camera today. Social hierarchy is still the backdrop, a story of class in general having become, on American soil, a story of race in particular. But something else emerged in the transition. Barker’s story and Rose’s movie—which shifted the setting to Chicago’s Cabrini–Green housing project—were told from the point of view of the bougie outsiders, the people for whom the slums are “indisputably foreign.” The horror played on their anxieties regarding the world of their social lessers. But the animating anxieties of DaCosta’s film belong to its upwardly mobile Black characters, whose relationship to Cabrini–Green is a bit more complicated. The horror now is generated by fears of complicity in the violence and dispossession that created Candyman in the first place and recreates him anew.

In Rose’s adaptation, Helen Lyle, an academic played by Virginia Madsen, grows infatuated with the horrific conditions besetting Black families in Cabrini–Green, who are under threat from a Black killer. Helen, aware of her place in the hierarchy, doesn’t want to be seen as exploitative. The class elements of Barker’s Liverpool become legible as racism in the context of Rose’s Chicago. Rose has said he wanted to tap into the “fear of the urban public housing project,” one he saw as “totally irrational,” expressed by those who avoided Chicago’s Cabrini–Green altogether. His Candyman, in many ways, was a social critique of the white terrors surrounding race and poverty in American cities, of the superstitions generated by those terrors. “It’s sort of a kind of fear that’s at the heart of modern cities, and obviously, it’s racially motivated, but more than that—it’s poverty motivated,” Rose said in a 2015 interview.

In DaCosta’s movie, co-written by Jordan Peele, Candyman’s legend is carved from the deaths of Black men before him—the Black painter, Daniel Robitaille, killed in the late 1800s for impregnating a white woman; the impoverished man named Sherman Fields, who was wrongly accused of putting razor blades in the candy he handed out to children and who was subsequently beaten to death by the cops. The legend of Candyman gets formed and forgotten and reformed over the years, the embodiment and in some way the avenger of intergenerational trauma.

Looming over everything is the memory Cabrini–Green, the last of whose high-rises were demolished in 2011. Once a national shorthand for the racist nightmares inspired by urban public housing, Cabrini–Green is now a symbol of displacement and gentrification, and DaCosta puts it to use in her Candyman. Anthony McCoy, the Black artist at the center of the film, struggles to navigate the discomfort of his own identity in a predominantly white art world, one that has thrived off the destruction of the neighborhood. He’s uneasy about his place.

Inside his luxury loft on the grounds where Cabrini–Green once stood, McCoy, played by Yahya Abdul-Mateen II, and his partner Brianna, played by Teyonah Parris, listen as Brianna’s brother recounts Candyman’s legend and Helen Lyle’s story. At one point, as they discuss the changes surrounding Cabrini–Green, Brianna remarks, “White people built the ghetto and then erased it when they realized they built the ghetto.” McCoy’s response? “Everywhere is haunted.”

Still, McCoy and Brianna live in a high-rise building where Cabrini–Green’s towers once stood. They must wrestle with the fact that they, too, have benefited from gentrification. McCoy becomes entranced by the history of the grounds around him and with Candyman’s legend, particularly after he meets longtime Cabrini–Green resident Burke, played by Colman Domingo. It eventually consumes him as it did Helen.

McCoy is seen as one of the city’s rising artists—the white art dealer supporting McCoy’s gallery installation bestows on him the cringe-worthy epithet of the “great Black hope of Chicago.” But when McCoy describes his intent behind the installation—to illuminate how “white supremacy creates spaces of rampant neglect for communities of color”—and mentions Bronzeville, the famed “Black metropolis” of Chicago, the white art dealer counters that the “South Side is played out,” as if Black life in Chicago were nothing more than a passing art fad. McCoy, leaning into his curiosity, decides to feature Cabrini–Green and Candyman instead, as a portrait of Black suffering. On one wall, a noose captures the neck of a mysterious figure. On another, a mirror forces onlookers to see themselves; upon looking behind the mirror, they see McCoy’s early works. The exhibit is called “Say His Name,” evoking both the Candyman legend (he’s summoned when people say his name five times in front of a mirror) and the campaigns against police violence that cost the lives of Breonna Taylor and so many others.

McCoy may be exposing the trauma of white supremacy, but he is doing so for a predominantly white audience inside a gallery near the loft atop Cabrini–Green’s grounds. He is a sort of accessory after the fact, perpetuating the trauma even as he attempts to honor it. White onlookers—the film critic, the art dealer, the gallery goers—exploit McCoy’s Black art, his depictions of Black suffering, for personal balm. McCoy, as an up-and-coming artist, is forced to operate within a privileged, predominantly white space to seek recognition. As he unravels over the course of his film, so does his art. “Everyone in the movie has this sort of base pain, this wound,” DaCosta told Vanity Fair. “And everything they do throughout the film is their way of trying to heal it, to varying disastrous degrees.”

If the horrors of the 1992 movie played off fears and preconceptions of white folks entering an impoverished Black space, DaCosta’s Candyman plays off the internal anxieties Black folks face in navigating a white world. (Oh, a rising Black artist wrestles with the moral dilemmas of offering up Black pain for the delectation of mostly white audiences? We see you and hear you, Jordan Peele.) When McCoy meets with the art critic at her loft, the white woman, played by Rebecca Spence, tells him that his installation felt “eternal.” She’s clearly only interested in his work after a spate of murders are linked to his installation. She then suggests that artists were the original gentrifiers. “Who do you think makes the hood?” McCoy asks, questioning her premise that residents themselves create the conditions for a gentrified city. “The city cuts off a community and waits for it to die. Then they invite developers in and say, ‘Hey, you artists, you young people, you white [people]…please come to the hood. It’s cheap—and if you wait for a couple of years, we’ll bring you a Whole Foods.”

Aside from McCoy, Black characters actively avoid uttering Candyman’s name—at one point, one character jokes that “Black people don’t need to be summoning shit.” When McCoy discusses his past with his mother, she silences him as he starts to speak of the monster. At the same time, white figures—the art dealer and his intern, the film critic, a group of teenagers in the girls’ bathroom—exude a troubling willingness to summon a figure Black folks fear because they doubt the legend. So as a result, when Candyman kills, he kills mostly white figures—an apparent act of revenge over the historic trauma white people inflicted on communities of color.

In the film’s final moments, as McCoy’s partner, Brianna, holds an ailing McCoy in her arms inside an abandoned Cabrini–Green building, cops bust in and kill McCoy. Officers drag Brianna handcuffed into the back of a police car as one of them tries to convince her to say that McCoy threatened the cops. That’s not what happened, of course—a familiar mismatch the nation has encountered over and over again. Under duress, Brianna stares at the driver’s front mirror and invokes Candyman’s name five times: The white officers around her are slashed, their blood splattering everywhere, but she remains alive to tell Candyman’s tale.

Is Candyman a reclamation of Black suffering or a true terror to all? By the film’s end, his acts of vengeance, and the logic behind them, are complicated by a flashback. Inside a bathroom in his Cabrini–Green apartment, a young Burke sees his sister killed after she utters Candyman’s name five times, putting paid to the idea that he is some righteous Black avenger of historical white wrongs. Even Candyman, it seems, can be complicit.