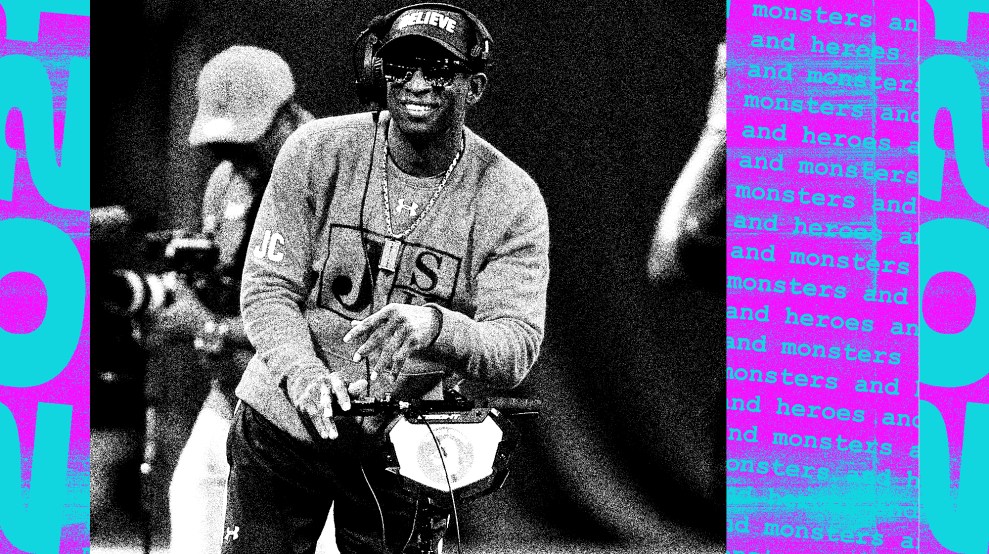 It is extremely hard to get a cool nickname. Lots of people have an alternative to their government name but they’re usually even more embarrassing than whatever the two adults decided at birth. Stuff like Baby or Frog or Chet. Even fighter pilots, who are mandated by the bloat of the military-industrial complex to have nicknames (call signs)—and who are supposed to be some of the coolest guys in the biz—get saddled with extremely lame nicknames. (Top Gun was revisionist–for every “Maverick” and “Ice Man”, there’s a “Banana,” a “Nuts,” and an “Omlet,” plus some problematic stuff.)

So, how did Deion Sanders do it? This guy got people to regularly refer to him by not just one, but two sick as hell nicknames: “Neon Deion” and “Primetime.” It’s an incredible achievement.

The obvious answer is, if you’re not familiar with Sanders, that he’s someone who was transcendently good at a sport in a way that made other professional athletes look like amateurs. As a cornerback in the NFL from 1989 year to 2000 (and a brief encore season in 2004), he had the level of skill that made white sportscasters blurt out stuff like “he’s such an electrifying athlete” with “tremendous raw talent” regularly. He played defense, but also sometimes offense as a punt and kick returner and even wide receiver, which is fairly rare, and usually befitting the one kid in high school who is going to play football in college. To do so in the NFL is absurd. And he did this while playing an entire other sport, baseball, professionally, too. This is also extremely rare. In the 90s, he even got close to becoming the first person to ever do both in the same day.

Still, many of the greatest athletes of all time do not have good nicknames. Vincent Jackson—maybe the only other person to rival Sanders skill as a two-sport athlete—had the nickname “Bo.” Michael Jordan had “Air Jordan,” which sounds like a terrible Marvel movie. Steph Curry and Klay Thompson are the “Splash Brothers.”

All of these people were equally as good, if not better than Sanders, in their own sports. Sanders has had something things that they don’t though: Lasting power. He proved that this year. Some people can be exceptionally cool and an incredible showman for a spell. But, usually, they fade. As the new head coach of Jackson State though, Sanders is running it all back again. Somehow, it still works.

In 2020, Sanders took over as coach of the Jackson State University Tigers football program in Mississippi. Since he showed up in 2020, the team has gone 15-5. They lost only one regular game in 2021. They went undefeated in their conference. They played in, but lost, the 2021 Celebration Bowl, the de facto national championship for historically black colleges and universities, effectively making them the second-best HBCU football program this year.

Primetime didn’t inherit a great program at Jackson State. In the five years before he showed up, the Tigers never broke a .500 record and went 3-8 for three seasons in a row between 2015 and 2017. I don’t know enough about football to know if he did this by being a schematic genius, but I do know that a large chunk of it came from him being a recruiting genius. In 2021, he recruited the number one class among Football Championship Subdivision schools, including 11 of the highest-rated recruits in the school’s history.

And maybe most important Primetime did all of this winning looking like this:

Also like this! Who else would ever look this cool, with a busted leg, on a goddamn duck tricycle?

An upside-down, backwards visor straight out of 2002. Obscenely reflective sunglasses. It’s all immaculate.

That doesn’t mean Coach Prime is beyond reproach. He isn’t perfect. In fact, Neon Deion’s hero status doesn’t extend beyond 2021. Whatever happened at Prime Prep Academy, a group of charter schools he founded in 2012, ended up a mess that let lots of children down. In his first season, Sanders made the press conference after a 53-0 Tigers win into a press conference about how his wallet and phone got stolen during the game, which weren’t actually stolen. He had just misplaced them and found them later.