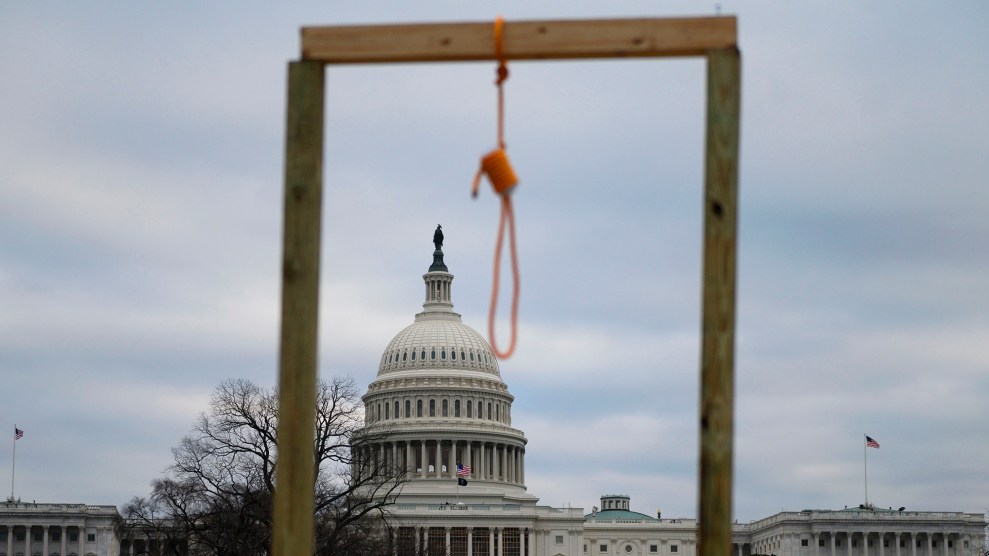 A noose is seen on makeshift gallows as supporters of US President Donald Trump gather on the West side of the US Capitol in Washington DC on January 6, 2021. Andrew Caballero-Reynolds/AFP/Getty

During the impeachment trial on Wednesday, Democrats demonstrated a powerful point: President Donald Trump knew Vice President Mike Pence was in danger during the January 6 assault on the Capitol and, rather than call off the murderous mob, Trump chose to attack Pence in a tweet and further incite the marauders against his own veep.

During his speech before the riot, Trump let it be known that he was counting on Pence to stop the electoral vote count scheduled for that day. But Pence released a statement that he would not do so, and the rioters at the Capitol cast Pence as an enemy. Pence and his family were rushed to a hiding place, as rioters inside the building searched for him. “Hang Pence,” some yelled.

In his presentation, Rep. Joaquin Castro (D-Texas), one of the House managers prosecuting the impeachment case, outlined a damning chronology. He noted the insurrectionists had turned on Pence by 2:15 p.m. that day and that their attempt to find Pence in the Capitol was being reported on television—which Trump was undoubtedly watching. But instead of urging his supporters to end the assault and protecting his vice president, Trump at 2:24 p.m. tweeted an attack on Pence. “Mike Pence didn’t have the courage to do what should have been done to protect our Country and our Constitution.” While his veep was fearing for his life, Trump put him in even greater jeopardy.

The message was received. Castro showed a video of one rioter reading Trump’s tweet to the crowd using a bullhorn.

WOW — @JoaquinCastrotx plays video of the insurrectionist on the right reading through a bullhorn the Trump tweet on the left, attacking Pence as the riot raged. pic.twitter.com/G1fgaKe14h

“They were paying attention,” Castro said. “And they also followed instructions.”

That Trump tweet stoked the rage of the rampagers. Castro played video in which rioters denounced Pence as a traitor and called for his assassination. A gallows was erected on the Capitol grounds. The rioters were listening to Trump. He was their leader, and he was fueling the violence and pursuing his main goal: stopping the vote certification. Pence’s safety was of no concern for Trump.