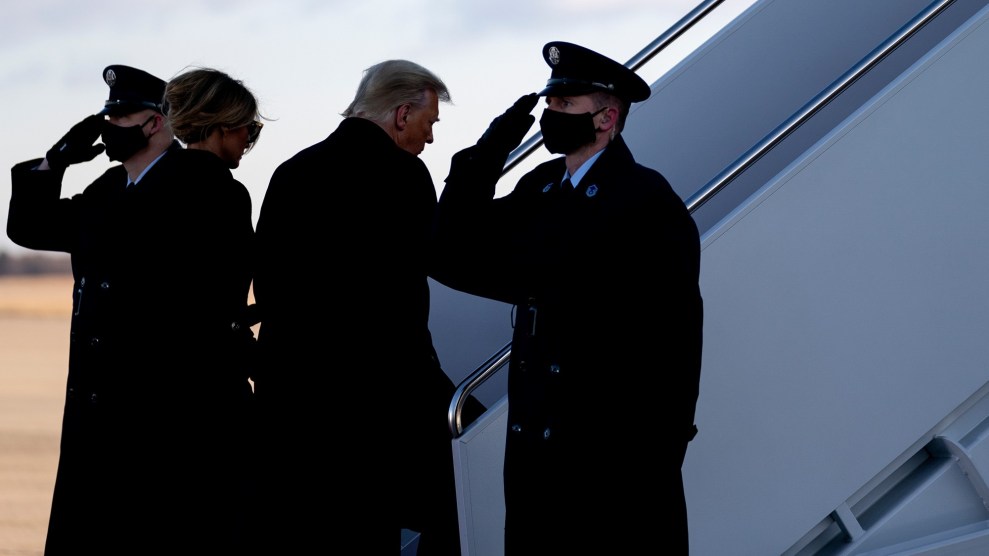 The Senate acquitted Donald Trump, again, on Saturday, but the former president’s legal worries are far from over. As a private citizen, Trump is no longer protected by the Justice Department’s policy against charging a sitting president with federal crimes. And Trump, his family and businesses, also have to worry about investigations in various local jurisdictions and at least one foreign country, lawsuits he used his presidency to dodge, and probes by congressional committees. Here are some highlights:

Georgia: Prosecutors in the Peach State have opened a criminal investigation into Trump’s efforts to overturn Georgia’s election results, where Joe Biden narrowly defeated Trump. Last week, a Democratic prosecutor in Georgia’s Fulton County sent a letter to numerous state officials, requesting that they preserve documents related to “an investigation into attempts to influence” the state’s 2020 presidential election, the New York Times reported. At issue are calls Trump and his allies made, including Trump’s January 2 call to Georgia Secretary of Secretary of State Brad Raffensperger. In that call, which Raffensperger recorded, Trump urged him to “find 11,780 votes,” one more vote than the margin by which Trump lost the state. Raffensperger’s office has also launched its own investigation into Trump’s efforts to pressure Georgia officials.

New York: New York Attorney General Letitia James is conducting a civil investigation into whether the Trump Organization inflated the values of his assets to win favorable loans and insurance coverage. Manhattan District Attorney Cy Vance is also looking into loans Trump took out on some of his signature Manhattan properties, the Wall Street Journal reported Saturday. That’s part of Vance’s wide-ranging probe into what his office has described as “possibly extensive and protracted criminal conduct at the Trump Organization” that could include insurance fraud, tax fraud, or other schemes to avoid taxes and cook the books to win favorable loan terms.

Scotland: The Scottish Parliament recently voted down a nonbinding measure calling for an anti–money laundering investigation into the finances of two resorts Trump owns in the country. But Trump’s Scottish critics remain suspicious that the properties, in which Trump has invested nearly $300 million without ever showing a profit, have been used to launder funds. The vote does not mean the country’s prosecutors aren’t investigating the money-losing resorts, Mother Jones has reported. Some Scottish officials have said it signals that the parliament wants to keep politics out of any probe into the properties’ finances that may already be underway. Scottish investigators will neither confirm nor deny if an investigation is in progress, leaving it unclear what legal issues Trump faces there.

Lawsuits: Trump’s two impeachments and other legal problems have distracted from the more than 26 allegations of sexual misconduct he still faces. Trump has denied all of those allegations. In doing so, he opened the door for women who say they are his victims to sue him for defamation. E. Jean Carroll, a longtime advice columnist who says Trump raped her in a department store dressing room in late 1995 or early 1996, is pressing a such a suit. Former Apprentice contestant Summer Zervos, who alleges Trump sexually assaulted her in 2007, has also sued him for defamation. Trump used the powers of the presidency to delay and fight those suits. He used the Secret Service to help him evade service of a court summons and claimed he was too busy to be deposed. He “claimed presidential immunity in state court, argued that he couldn’t be sued in New York because of his temporary residence in the White House, and had the Department of Justice intervene on his behalf,” Mother Jones has reported. Now those protections are gone. Lawyers for Zervos and Carroll, noting his arguments for delay are rendered moot by his defeat, are pressing judges to let them proceed with their cases.

Congress: Congressional committees, all run by Democrats, are free to investigate all aspects of Trump’s conduct as president and as a private citizen. Notably, the House Judiciary Committee says it is still fighting to enforce subpoenas it issued in 2019 as part of its probe into Trump’s alleged obstruction of justice aimed at undermining Special Counsel Robert Mueller’s investigation of Trump’s ties to Russia, among other things. That means the panel could still hear testimony about Trump’s alleged criminal conduct as president. And while Mueller declined to charge Trump with obstruction of justice due to a DOJ policy against indicting a sitting president, Merrick Garland’s Justice Department could still file charges against private citizen Trump.