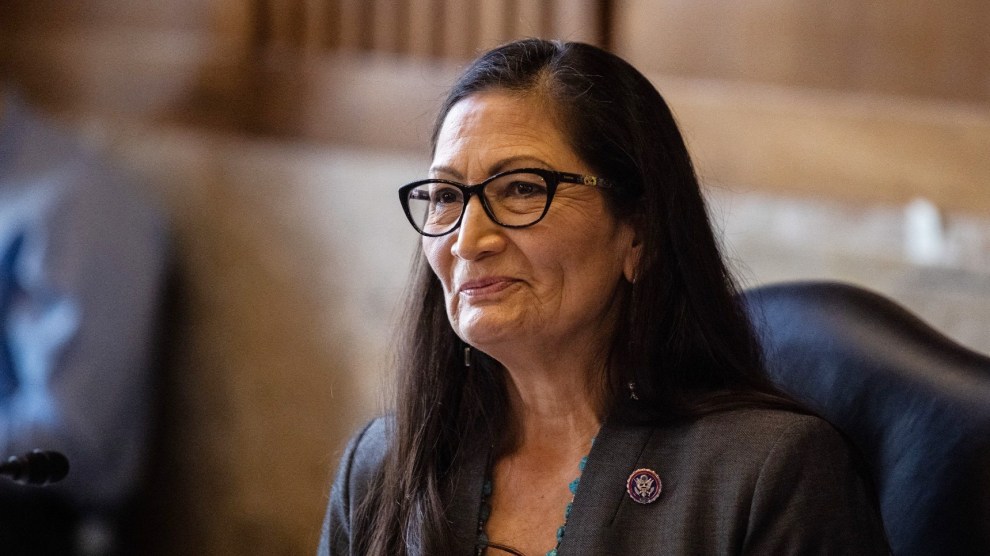 Deb Haaland speaks during the Senate Committee on Energy and Natural Resources hearing on her nomination to be Interior Secretary on Capitol Hill in Washington, DC, in February.GRAEME JENNINGS/Getty

In a historic vote on Monday, the Senate confirmed President Joe Biden’s pick to lead the Department of the Interior, New Mexico Rep. Deb Haaland, voting 51–40 to make her the first Native American to serve as a Cabinet secretary.

The vote was largely split along party lines. Of the 51 senators voting in favor of Haaland’s confirmation, just four were Republicans: Susan Collins (R-Maine), Lindsey Graham (R-S.C.), Lisa Murkowski (R-Alaska), and Dan Sullivan (R-Alaska). No Democrats voted against the nomination. Nine senators, including three Democrats, did not vote.

The confirmation is a victory for environmental advocates. In her two years in Congress, Haaland backed efforts like the Green New Deal and “30 by 30,” a House effort to protect 30 percent of US land and ocean by 2030—positions that earned her a 98 percent rating from the League of Conservation Voters. During her confirmation hearing in February, she pledged to be “a fierce advocate for our public lands” and to run a department that makes decisions “based on science.”

As I wrote earlier this month, conservationists are hoping that among Haaland’s first priorities will be reversing the Trump administration’s sweeping attacks on public lands and wildlife. “Following up on the Trump administration, it’s a tall order,” Noah Greenwald, endangered species director at the Center for Biological Diversity, told me at the time. “He just did so much to undermine protections for endangered species and wildlife, that there’s just a lot of work to do.”

At the top of Haaland’s to-do list for protecting vulnerable species, environmental advocates told me, should be reversing Trump’s broad rollbacks to the Endangered Species Act:

Over four years, Trump’s administration issued five rules that redefined how the Endangered Species Act is interpreted, Greenwald says. The first three came as a set in 2019 and made sweeping changes to how species are protected and the act is enforced. “It was really a broad base attack on the law,” says Rebecca Riley, legal director of the Natural Resources Defense Council’s Nature Program. The changes were so broad—for instance, allowing officials to “compile and present” economic factors in listing decisions—that most species listed under the act or waiting to be listed would be affected in one way or another, advocates told me at the time. Some of those species included the grizzly bear, moose, and monarch butterfly.

The two other rollbacks, which were enacted in the final months of Trump’s presidency, focused specifically on habitat. As Kristen Boyles, an attorney with Earthjustice whose work includes Endangered Species Act litigation, explains, the regulations “created more loopholes” for agencies to avoid issuing habitat protections—a change which “really cuts at the heart of the act,” Boyles says. “If [at-risk species] need anything, they need that habitat protected more than almost anything else.”

Environmental groups, some of which have sued the federal government over the rollbacks, are hoping all five rules will be reversed either through litigation or by putting new rules in place. As Interior secretary, “[Haaland] will have a lot of work ahead of her to restore the Endangered Species Act,” Riley says. “The Trump administration did everything they could to weaken the law.”

You can read more about what conservationists are calling for in my piece here.