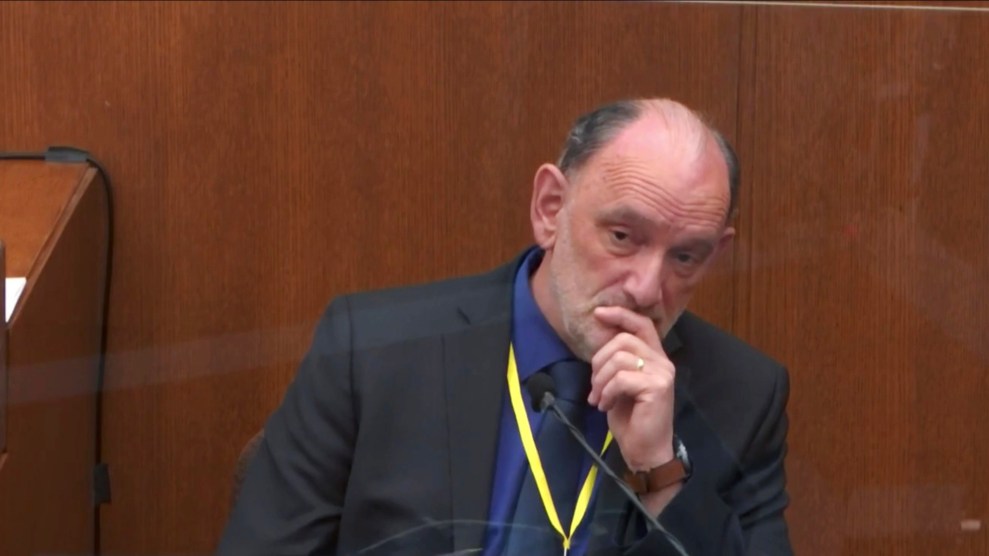 On Wednesday, in the trial of Derek Chauvin, the white Minneapolis police officer accused of murder, a defense witness introduced a brand new theory of what killed George Floyd last May. After dozens of witnesses testified that Floyd died because Chauvin kneeled on his neck for approximately nine minutes, Dr. David Fowler, who has been involved in other high-profile police cases as Maryland’s former chief medical examiner, countered that a slew of contributing factors likely led to Floyd’s death—including the carbon monoxide from a police car’s exhaust pipe. This new assertion only served one purpose: To muddy the waters for the jury that will decide Chauvin’s fate.

Bystander video of Chauvin pressing his knee into Floyd’s neck as he struggled to breathe went viral and sparked nationwide protests, but throughout the trial the defense was intent on creating reasonable doubt in the minds of the jury. Not only could Floyd have suffered from carbon monoxide poisoning, but what about his heart condition? And didn’t he really suffer from a drug overdose? In other words, everything but Derek Chauvin’s knee killed George Floyd.

The Hennepin County medical examiner ruled that the cause of death was homicide, and several of the state’s witnesses testified that Floyd died because he couldn’t breathe due to the police restraint. Dr. Fowler, however, said that Floyd’s death was more consistent with sudden cardiac arrest. He told the court that he couldn’t be certain of the victim’s cause of death due to the multiple factors that likely contributed to it. “I would fall back to undetermined in this particular case,” he said.

“I would fall back to undetermined in this particular case.”

We’ve heard about heart conditions and drugs before, but Dr. Fowler’s theory of poisoning by carbon monoxide from a police car’s exhaust when Floyd was handcuffed and laying on the ground brought a new level of creativity to the trial. Not that Eric Nelson, Chauvin’s lawyer, and Dr. Fowler were suggesting that the main cause of death was carbon monoxide poisoning, but rather that it could have been a contributing factor. “Now, again, you’re not suggesting to the jury that Mr. Floyd died of carbon monoxide poisoning?” Nelson asked the doctor. “No, not exclusively,” he answered.

But here’s where something interesting happened: Dr. Fowler mentioned carbon monoxide so frequently that when he was being cross-examined by the prosecution, Jerry Blackwell, the state’s lawyer grilled Fowler about it. “Do you agree with me that there was no finding of carbon monoxide poisoning from Dr. Baker’s autopsy review?” Blackwell asked. Dr. Fowler agreed. Still, the whole idea of carbon monoxide as a remote and unlikely factor nonetheless somehow became normalized. Then, on Thursday morning, the state sought to include new evidence showing Floyd’s body had a normal range of carbon monoxide in it, but Judge Peter Cahill wouldn’t allow it.

Dr. Fowler’s testimony serves the purpose of confusing the jurors, who will be sequestered in order to deliberate after closing arguments that begin on Monday. He essentially offered the proposition that despite all the other testimony, despite the video evidence to the contrary, no one can definitely know what killed Floyd last May. And if the jury can’t definitively say that it was Chauvin kneeling on Floyd’s neck until he could no longer breathe, as several witnesses testified, then they can’t issue a guilty verdict. By arguing that it was a drug overdose, a cardiac event, and maybe even car exhaust fumes, the defense renders Chauvin in his capacity as a law enforcement officer, if not powerless, then limited in his capacity to inflict deadly harm. It wasn’t a white police officer that killed Floyd. It was Floyd’s own body, and by extension, his own fault.