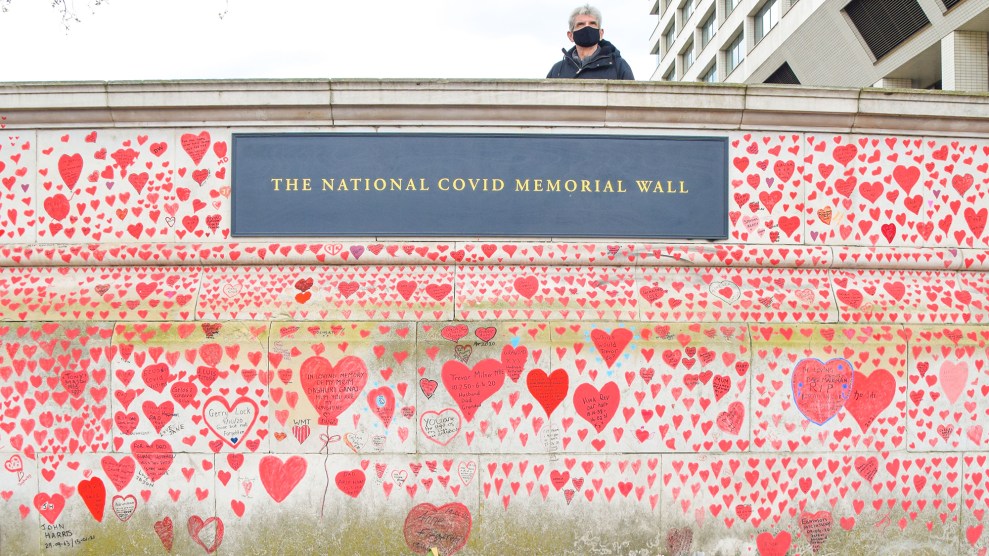 A man stands above the National Covid Memorial Wall outside St Thomas' Hospital IN London, UK on April 13, 2021.Vuk Valcic/SOPA Images via ZUMA

The global death count from the coronavirus surpassed 3 million on Saturday, a solemn milestone as the pandemic continues to rage around the world and vaccine distribution efforts stumble in many countries.

The United States leads the world in total deaths with over 566,000, according to tracking done by the Johns Hopkins University. Brazil, where a variant of the virus coupled with the government’s poor response has pushed the country’s medical system to its breaking point, has the second highest number of casualties and one of the highest per capita death rates in the world. It accounts for roughly a quarter of the lives lost around the world in the last month. A recent surge in cases in India has left some morgues “overflowing,” the New York Times reports.

In the United States, a promising vaccine rollout is bringing hope of a return to some normalcy this summer. But cases numbers here are still higher than they were for much of last year, until the winter surge, and in recent days have been growing.

In many countries, vaccination campaigns will take much longer, producing global vaccine inequities. Countries with higher incomes are vaccinating 25 times faster than those with lower incomes, according to Bloomberg. They also own, and can distribute, far more doses of the vaccines. Geographic rifts are emerging too. Less than 2 percent of the COVID-19 vaccines administered have been administered across the entire continent of Africa. Pauses in administering the Johnson & Johnson and AstraZeneca vaccines in the US and Europe are slowing the vaccination process. And of course, the longer the pandemic continues, the more possibility there are that vaccine-resistant variants will take hold and spread, threatening progress.

More than a year after COVID-19 began spreading around the world, scientists have made extraordinary leaps in combatting it and bringing hope of the pandemic’s end—but for now, the death toll keeps rising.