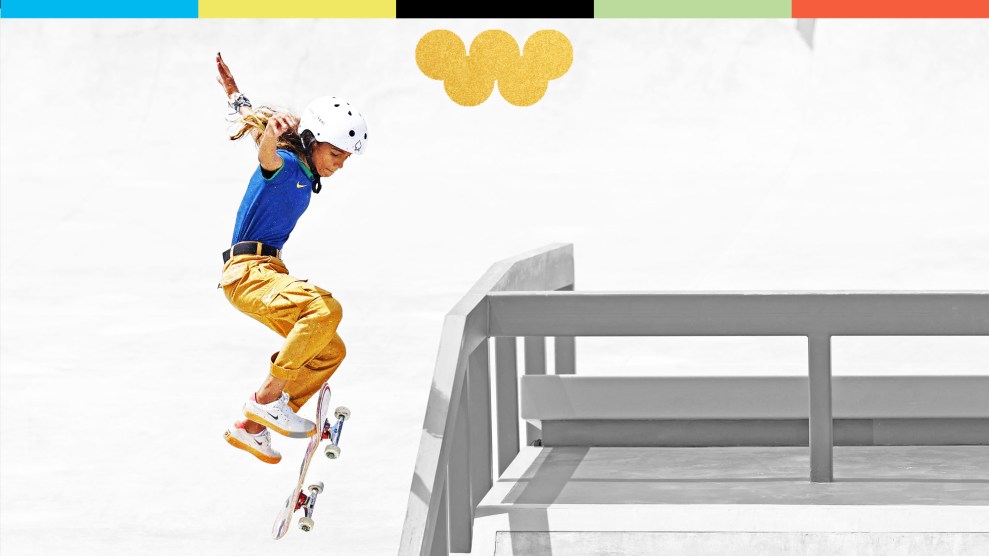 Rayssa Leal was only 7 when she went viral. In early September 2015, millions of people watched the video of the then-7-year-old skateboarder, dressed in a bright blue fairy costume, fall twice before triumphantly landing a heelflip. One of them was skateboarding legend Tony Hawk:

I don't know anything about this but it's awesome: a fairytale heelflip in Brazil by #RayssaLeal (via @oliverbarton) pic.twitter.com/uZgshHYMMT

Fast-forward to 2021 and the Olympics in Japan, and Leal, now 13, has just become Brazil’s youngest-ever Olympic medalist, winning second place in the women’s street skateboarding competition.

I grew up in Brazil and lived in Rio until recently and I can confirm that Leal, who was born in Imperatriz in the northeastern state of Maranhão, is an absolute sensation back home. The sport is making its Olympic debut this year, and in the early Monday hours, Brazilians tuned in to cheer “one of the stars at the Tokyo Games” as she won the country’s second silver—joining fellow Brazilian skater Kevin Hoefler—and third overall medal in Japan. Leal scored 14.64 points and finished just a spot behind another 13-year-old prodigy, Japan’s Momiji Nishiya, who earned 15.26 points. The hug and fist bump between the two girls after the results came in might have been the best moment of these Olympics so far:

Watching these two 13 year old giants win gold and silver then congratulate each other is awesome and adorable. pic.twitter.com/MWGvkmbYI1

Despite her youth, Leal has quite an impressive resume. She started skating when she was 6. In 2019, at the age of 11, she became the youngest skater to win a women’s final at the Street Skateboarding League World Tour event in Los Angeles and made it to second place in the world ranking. A year later, she received a nomination for the Laureus Award, the equivalent of the Oscars for sports.

“I’m living a dream,” she wrote to her 4.6 million followers on Instagram just days before this week’s final. She also thanked Hawk for introducing her to the world of skateboarding.

Leal could be seen cheerfully performing viral TikTok dance challenges in between rounds of tricks, until her effortless execution in the final competitive round. After the final, she celebrated her victory with even more dancing alongside a fellow competitor, the equally charismatic Margie Didal from the Philippines.

Across social media in Brazil, the phrase “I believe in fairies” is trending. In a fractured country struggling to resurface from a ravaging pandemic amid a seemingly never-ending political crisis, Leal emerges as a rare source of consensus and pride. She has been hailed as someone all Brazilians can gather around, support, and be inspired by. She’s the best Brazil has and a much-needed reminder of everything the country can aspire to. One popular singer praised Leal for rescuing the country’s flag from a denier government. “‘Once upon a time there was a girl who loved her skateboard and had a dream.’ And so begins a true Fairy Tale that made all Brazilians smile today,” soccer legend Pelé wrote in a post. “You are truly a ‘Fairy’, which makes us believe that even the most difficult dreams can come true.”

How it started: How it's going: pic.twitter.com/CgnwTnBXEn