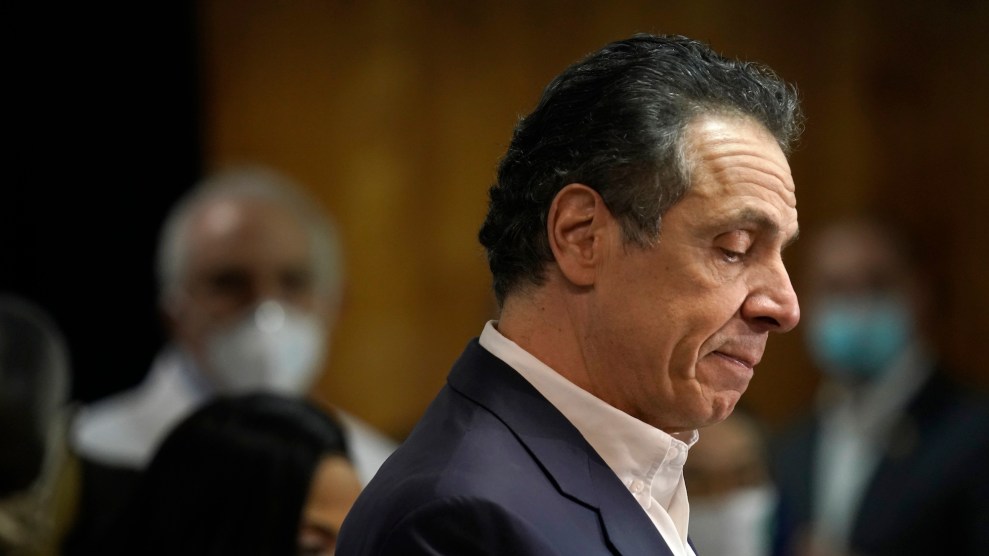 A former staffer who says New York Gov. Andrew Cuomo groped her breast without consent has filed a criminal complaint against the governor with the Albany County Sheriff’s Office, according to reports in the New York Post and other outlets on Friday. The new filing significantly escalates Cuomo’s legal exposure; the sheriff’s office is now investigating. If the complaint is substantiated, Albany Sheriff Craig Apple told the Post, Cuomo could be arrested.

The woman—known as “Executive Assistant #1” in New York Attorney General Letitia James’ bombshell report—is one of 11 victims of sexual harassment or other misconduct whose claims have already been investigated and substantiated by lawyers contracted by James’ office. That report found that the governor’s behavior included “unwelcome and nonconsensual touching,” as well as “numerous offensive comments of a suggestive and sexual nature that created a hostile work environment for women.” Not only did the governor break federal and state laws prohibiting sexual harassment, the report concluded, his response to allegations of sexual harassment from one woman, Lindsey Boylan, involved illegal retaliation.

Up till now, none of the women victimized by Cuomo have opted to make a criminal complaint—instead seeking justice and accountability though other means, like speaking out publicly, calling for his impeachment, and preparing a civil lawsuit against him. The experience of Executive Assistant #1, who has not been publicly identified, was revealed in March after a supervisor noticed her becoming emotional while Cuomo gave a press conference denying some of the first sexual harassment allegations made against him.

According to James’ report, Cuomo had been treating his assistant inappropriately since late 2019—hugging and kissing her, touching and grabbing her butt, and asking if she’d cheat on her husband or help find him a girlfriend. In November 2020, after the assistant was called to the Executive Mansion to help with a minor technical issue, Cuomo slammed the door, slid his hand up her shirt, and groped her without consent. “At that moment it was so quick and he didn’t say anything and I just remember thinking to myself, ‘Oh my God,'” the assistant told investigators. “I feel like I was being taken advantage of and at that moment that’s when I thought to myself okay, I can’t tell anyone.”

The Albany County Sheriff’s Office has reported the complaint to Albany County District Attorney David Soares, according to the Post. Soares is one of four district attorneys around the state who have opened criminal probes into Cuomo’s behavior in the wake of James’ report.

Meanwhile, Cuomo could soon be in another legal battle, this one civil. A lawyer for Lindsey Boylan—whose confidential personnel files were leaked by Cuomo and his staff after she came forward about governor’s harassment—said Thursday that she would be pursuing a lawsuit against the Cuomo and his aides, claiming retaliation. Cuomo has denied all allegations of retaliation, as well as sexual harassment and misconduct.

In a particularly gutting confluence of these women’s stories, Executive Assistant #1 was enlisted to search for Wite-Out to remove some names from Boylan’s personnel files. “I would be in the room when they were actively trying to discredit her,” she told investigators. “They were actively trying to portray a different story of it. Trying to make her seem like she was crazy.” Her fear of reprisal if she reported what Cuomo did to her only grew as she witnessed the campaign to smear Boylan. Seeing that, she told investigators, dissuaded her from reporting the governor’s misconduct. “I was going to take this to the grave,” she decided.

Now, while Albany County authorities investigate her complaint and deliberate on whether to bring criminal charges against the governor, the New York State Assembly is wrapping up an impeachment probe. Cuomo’s legal team has a deadline of August 13 to provide additional evidence in his defense. In addition to the many former Cuomo allies—from President Joe Biden to House Speaker Nancy Pelosi—who have called for the governor to resign, Cuomo has also lost support from perhaps the most crucial figure in his last-ditch attempt to hold on to power: Assembly Speaker Carl Heastie, who controls the impeachment proceedings.

“After our conference this afternoon to discuss the Attorney General’s report concerning sexual harassment allegations against Governor Cuomo, it is abundantly clear to me that the Governor has lost the confidence of the Assembly Democratic majority and that he can no longer remain in office,” Heastie said in a statement on Tuesday. “Once we receive all relevant documents and evidence from the Attorney General, we will move expeditiously and look to conclude our impeachment investigation as quickly as possible.”