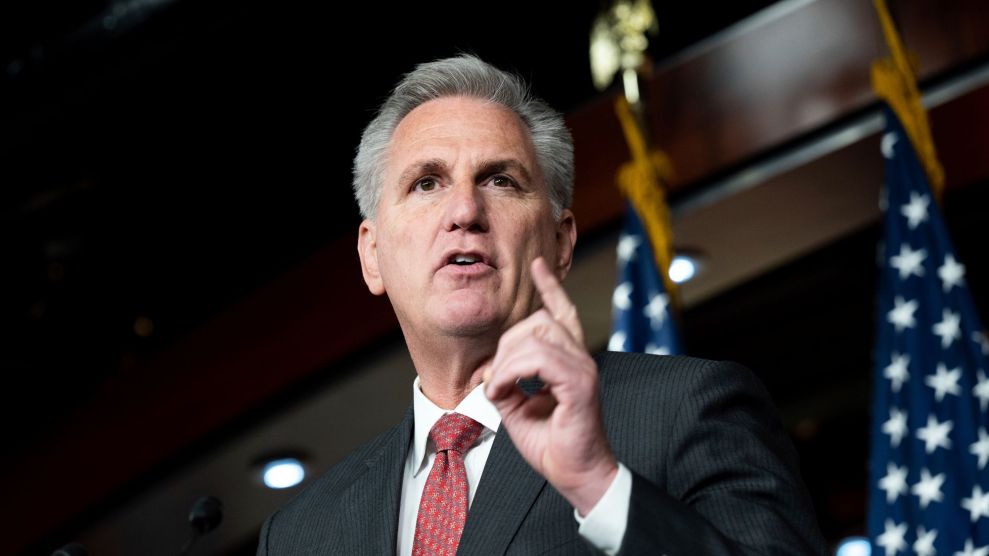 Great news! At long last, Republicans in the House of Representatives are taking a courageous stand against the wing of their party that traffics in bigotry and outlandish conspiracy theories and that tried to end America democracy. Just look at the exciting headline on this scoop CNN published yesterday: “Moderate House Republican warns McCarthy over embracing far-right members.”

A GOP lawmaker said a number of moderates are upset with how House Minority Leader Kevin McCarthy has embraced some fringe members in the GOP conference and warned it could hurt the party https://t.co/lVGwUoB1et

Wow! So who is this brave lawmaker—this statesman who is willing to fight back against GOP leader Kevin McCarthy and the Trump acolytes McCarthy has spent years appeasing?

A moderate House Republican is firing off a warning shot at House Minority Leader Kevin McCarthy as he caters to his right flank in a quest for the speaker’s gavel.

“He’s taking the middle of the conference for granted,” the GOP lawmaker told CNN, speaking on condition of anonymity to discuss internal conference dynamics. “McCarthy could have a bigger math problem with the moderates.”

Specifically, the lawmaker said a number of moderates are upset with how McCarthy, of California, has embraced some of the extremists in the GOP conference and warned it could hurt the party in swing districts and undermine their chances of winning back the majority.

The story, which was not published by The Onion, adds that this courageously unnamed public servant “predicted other moderate lawmakers would start speaking out publicly if McCarthy doesn’t do more to rein in the fringe members in the party.”

“Our side isn’t going to take this much longer,” the anonymous lawmaker valiantly concludes.

The absurdity here is self-evident. I don’t really blame CNN for publishing it—it’s a pretty useful window into how ineffective the non-authoritarian faction of the House GOP has become. Just a handful of Republicans voted for Trump’s second impeachment, or for the January 6 investigation, or even for the bipartisan infrastructure bill. Many of them are either retiring or in serious danger of losing to a MAGA primary challenger. The rest of the GOP caucus has spent the last five years desperately trying not to do the right thing, and they certainly aren’t interested in speaking out publicly now.

In his new book, Betrayal, ABC News’ Jonathan Karl recounts a remarkable conversation he had with McCarthy in the shadow of the Washington Monument and the Lincoln Memorial on January 2—just days before McCarthy joined most House Republicans in voting to throw out Joe Biden’s victories in Arizona and Pennsylvania. Karl noted that day that McCarthy had an opportunity to push back on the increasingly unhinged and dangerous rhetoric coming from the right. But McCarthy made it clear his priority was to avoid angering Trump:

Exaggerating to make a point about the historical weight of the moment, I nodded toward the monuments along the National Mall—memorials to political leaders remembered precisely because they did things that were both important and difficult to do.

“Who knows,” I said, “if you do the right thing, maybe there will be a statue of you out here someday.”

“Where’s the statue for Jeff Flake? Where the statue for that guy from Tennessee?” he said, referring to the former Republican Senator Bob Corker who, like former Republican Senator Jeff Flake, had stood up to Trump during Trump’s first two years in office. As McCarthy saw it, both men gave big speeches condemning Trump’s actions and were rewarded with political obscurity. They became pariahs within the Republican Party. Nobody talks much of Flake and Corker anymore. McCarthy believed they ultimately accomplished little by taking on Trump. Their speeches didn’t change Trump’s behavior—in fact, they may have egged him on to be more outrageous.

So, in his quest to be speaker of the House, McCarthy can vote to overturn the election. He can promise to give influential committee assignments to Reps. Marjorie Taylor Greene (R-Ga.) and Paul Gosar (R-Ariz.), whose extremist rhetoric got them kicked off their committees this year. And he can back the ouster of Rep. Liz Cheney (Wyo.) from GOP leadership in the wake of her outspoken condemnation of Trump’s coup attempt. But maybe if McCarthy crosses any more lines, other Republican lawmakers will “start speaking out publicly.” Perhaps they will even use their real names.