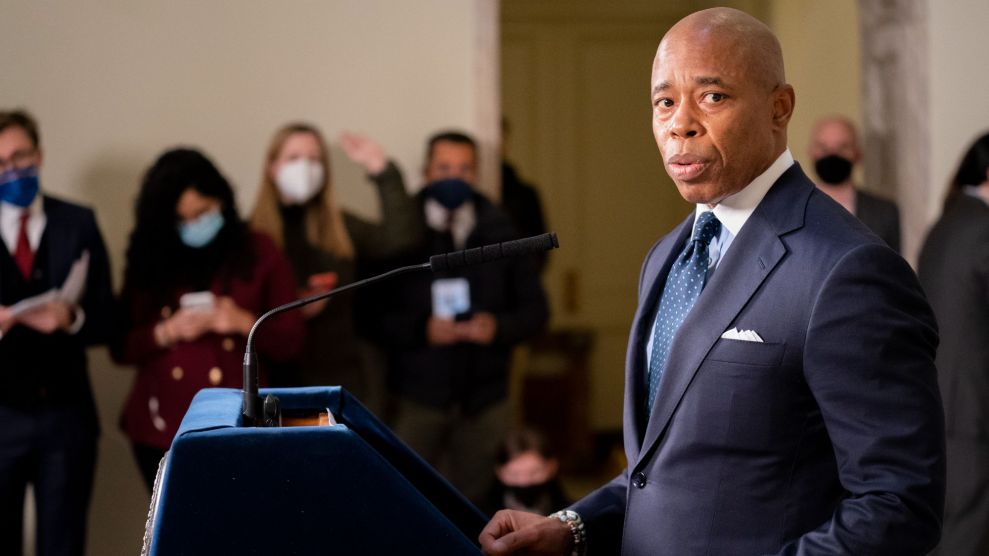 On Thursday, President Joe Biden came to New York City to meet with Mayor Eric Adams—former cop, current crypto influencer, vegan, and potential “future” of the Democratic Party—to make clear that the administration is cracking down on violent crime.

Gun violence has increased across the country over the past year. The Covid-19 pandemic has exacerbated many of the factors that can make communities more susceptible to gun violence, including poverty, access to mental health care, and housing insecurity, and also distanced at-risk individuals from social networks that can help prevent them from resorting to violence. In 2021, the number of shootings in New York City climbed to 1,562, the highest in 15 years.

This has led to legitimate concern for a need to curtail violence. But the discussion has also been dogged by an outsize, and reactionary, idea that crime is at an all-time high. (It’s not.) And that Biden is doing nothing to stop crime—or that he is in favor of defunding the police. (He has, in fact, consistently pushed back on the idea of defunding police departments and even encouraged state and local officials to use stimulus money to hire more officers.)

Biden used his trip to New York City today to align himself clearly with Adams, who has no trouble convincing people he likes the police. Adams, for his part, spoke about a crackdown.

A former police officer who has publicly disavowed stop and frisk, Adams called today for a “9/11-type response.”

But what does that mean exactly?

NYC Mayor Eric Adams (D) calls for a "9/11-type response to address the domestic terror that is pervasive in this city and country."

"He is here," Adams says of Biden in NYC today, to "give New Yorkers the backup we need." pic.twitter.com/wbybOVx9Ba

The answer can be found in a gun violence prevention plan that Adams unveiled last week, which mixes aggressive policing policies and rollbacks to criminal justice reform with programs designed to invest in communities and build up neighborhood institutions.

“Over the longer term, it will require a transformation of our city: growing economic opportunities, improving the education of every child, providing more access to mental health support, and so much more,” the plan reads. “Yet immediately…we must address the crisis of guns on our streets.”

The blueprint contained some important proposals that would help empower communities to combat gun violence, including a plan to expand the use of violence interrupters—community members, often with criminal histories, who keep an eye to developing conflicts and attempt to dissuade people from resorting to violence. The plan would also expand the city’s mental health infrastructure and establish a summer youth employment and engagement program partnered with New York City businesses and corporations, which would provide youth with paid internships to occupy them during the summer months, when rates of gun violence tend to spike.

However, the blueprint also reverses a series of police reforms implemented in the wake of the 2020 George Floyd protests and contains a series of controversial proposals that could easily lead to police abuse, including a plan to expand the use of “new technologies and software to identify dangerous individuals and those carrying weapons,” a plan to roll back bail reform, and a plan to charge 16- and 17-year-olds who commit gun offenses in criminal rather than family court.

Perhaps the most contested part of Adams’ program involves the reestablishment of plain-clothes anti-crime units under the new name “Neighborhood Safety Teams.” New York City plain-clothes units were disbanded during the George Floyd protests, because their aggressive tactics led to a series of highly controversial police killings. According to the Intercept, NYPD plain-clothes officers were responsible for almost a third of fatal police shootings despite making up only 6 percent of the police force. In 2014, Daniel Pantaleo, a plain clothes officer in an anti-crime unit, killed Eric Garner by placing him in an illegal chokehold. Garner’s death was captured in a viral video that helped build momentum for police reform.

Adams has been insistent about his intentions to improve the plain-clothes units rather than reconstitute them in their previous form, but the blueprint lacks details as to what will be different. In a press conference, Adams said the anti-crime units will wear body cameras and clothing identifying them as police officers, but it’s unlikely that this change will be broad enough to prevent any unjustified shootings from occurring.