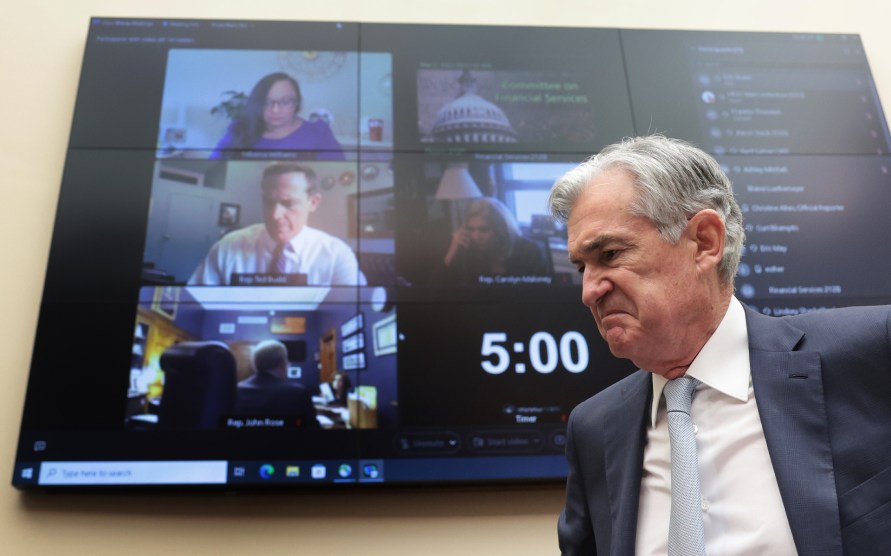 Amidst war, a boring sounding thing like the Fed raising interest rates could go mostly ignored outside of the financial press. But it really shouldn’t be. This seemingly anodyne action could have a profound effect on your life, not to mention the next few elections.

According to remarks prepared to be delivered before the House Committee on Financial Services on Wednesday, Federal Reserve Chair Jerome Powell will finally tip and say the central bank is going to raise interest rates this month for the first time since 2018. The hope is that by raising them up from near zero, where they currently sit, the Fed can move to tame inflation; after years of vast deflation, prices have risen rapidly in the past year. The idea is that higher interest rates can turn down the heat on the economy, without turning it down too much.

But such an action is a risky gambit, and could mean a less robust economic recovery. That would be true even without a war and sanctions, which create insecurity around supply chains.

As President Joe Biden extolled in his State of the Union last night, the economy’s state after the Covid shock has been remarkable. It has led to a tight labor market, worker power, and a vast bounce back, especially for low-wage workers, unlike anything we’ve seen in recent history. (For context, in some ways, we’re just now seeing a serious recovery from the 2008 crisis). But Biden has had trouble touting this victory as inflation has risen. Polls have shown that people are angered by inflation. (Polls also show that most of us don’t really understand much about it.) Inflation might be unpopular, but so is a crap economy. Is there a middle road?

Since President Donald Trump left office, there has been a vast, technocratic (even academic) battle that has resurfaced for how to deal with inflation and whether it should be chiefly the province of the Fed. This debate can be confusing; the Fed works in a coded language of wonkery, finance, and assumptive economics. And I am not Margot Robbie in The Big Short, but just follow me for one second on some basics; all this brochure manual language is the stuff of your life, like it or not.

The Fed is an independent body with a dual mandate: maximum employment and keeping inflation in check. The bank wants to create monetary policy (what Congress does is fiscal policy) that gets as many people in jobs as possible and holds “stable prices.” The Fed determines the total amount of money in circulation (and kind of more, but that’s what you need to know for this), which gives the chair of the Fed massive control of the economy in an unelected position.

For years, people thought that the best way to stop inflation was through monetary policy, as set by the Fed. During the great inflation crisis of the 1970s, a neoliberal consensus formed around this point, especially after President Jimmy Carter appointed Paul Volcker as Fed chair. Volcker raised interest rates—taking on the theories of Milton Friedman—and the economy went ker-fucking-plunk. Carter lost reelection and Volcker had a recession named after him.

Still, Volcker kept his job, and Ronald Reagan rode into town on the fuller theories of Friedman. As I’ve written before, this presented the class struggles of inflation as if they were just a math problem to be solved. This was class war as calculus. Coded into this broader struggle against inflation was the decimation of worker wages and the tearing apart of unions. Fiscal stimulus, and its debt, were the enemy. When Reagan said “government is not the solution to our problem, government is the problem,” he was talking about the “economic ills“—namely, inflation.

Economists on the left have tried to disrupt this thinking by approaching inflation as something to be solved by price controls or other policies. It would be nice to think we can solve inflation not just by, you know, causing a recession—especially since we’re in a much different economic place now than we were when Carter was in the White House.

We will have to wait and see if Powell’s latest move portends a return of austerity across the board. The Fed has signaled it will raise rates for months. Still, it could just be a step, not a full scale assault on inflation by raising rates. So, it’s worth paying attention to what happens next. At the risk of sounding like a broken record, it can have tangible effects on your life: “People lost their jobs and never got them back,” economist Dean Baker told The Week in 2018 of the Volcker recession. “People lost their houses, lost their families.”