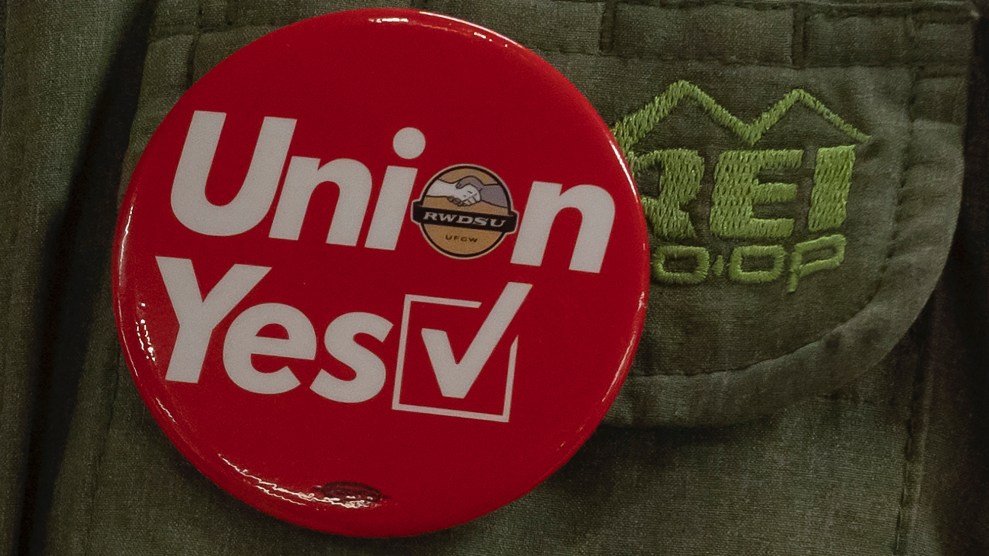 The rock-climbing, canyon-crossing, river-rafting workers at outdoor gear giant REI love a challenge—even when it comes from their bosses. Overcoming stiff corporate opposition and a slick anti-union campaign, staff at the company’s New York flagship store voted Wednesday to unionize by an overwhelming 7-to-1 margin.

REI SoHo, the nearly 40,000-square-foot Manhattan store, is the first of the company’s locations to unionize. Eighty-six percent of its 116 staff, from tech specialists to shipping and retail workers, voted to form a new local of the Retail, Wholesale, and Department Store Union—the same union that workers at Amazon’s huge Bessemer, Alabama, facility are now voting on whether to join. The REI vote follows an expensive, full-bore effort against the union, including an anti-union podcast that drew laughs online for “progressive” flourishes like an Indigenous land acknowledgement and executives’ recitation of pronouns. (REI CEO Eric Artz, who opened with the land acknowledgment, earned $3,284,590 in 2019.)

The REI workers filed their union petition in January, citing widespread concerns across the retail sector: They wanted more transparency about pandemic protections, benefits, full-time status, and better pay. Store staff members have told reporters that they’re paid $18.90 an hour, less than the borough’s living wage for a single adult without kids. “These are very basic things that REI has gotten away with not doing despite this facade of being a progressive, liberal company,” Kate Denend, who works at the store and supports the union, told Motherboard.

But throughout the day, REI employees—”green vests,” in company slang—were flooded with messages of support as they filed into a break room to vote. Their union drive, like the high-profile unionization efforts at Amazon and Starbucks, has benefited from a new wave of support for organized labor: Polls show that unions haven’t enjoyed this much public favor since the 1950s, and workers across the country have been launching increasingly ambitious union drives. While union membership is still trending downward overall—in the early 1980s, twice as many Americans were unionized as are now—retail unions, driven by young, energetic organizers, are spreading fast.

“We’re hopeful that REI meets us in good faith during negotiations for our first contract,” said REI worker and union organizer Claire Chang in a press release, calling the vote a chance for REI workers to take the company up on its motto—”a life outdoors is a life well lived”—by bargaining for pay and hours that would make it possible.

REI’s pushback came with a cost. Its public image and anti-union campaign couldn’t jibe. The company’s online forum, where co-op members meet and talk, is loaded with posts from irate customers, many threatening to withhold their business: “End the union busting activities or I will shop elsewhere, never to return and never to recommend.” “Many of us would PREFER to shop at a unionized store!” “Do better, REI.”

The company stressed its “co-operative values” in anti-union statements, especially during captive-audience meetings against unionization. It’s true that REI is the country’s largest consumer co-op—but that means consumers, not workers, get a share of ownership and accompanying benefits. (REI chose not to stress the “consumer” part.)

In an emailed statement, REI said that it “firmly believes that the decision of whether or not to be represented by a union is an important one, and we respect each employee’s right to choose or refuse union representation. We are, at our core, cooperative.”