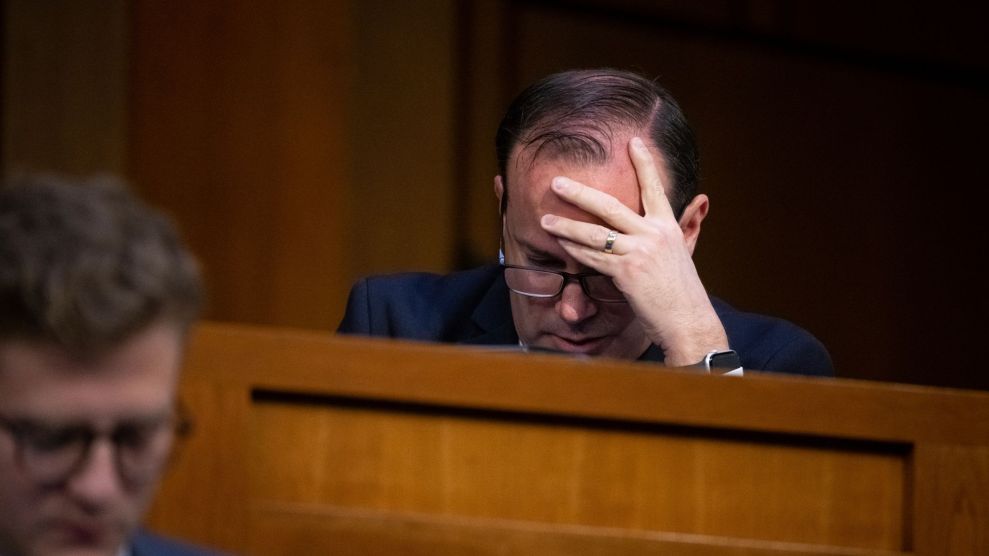 Utah Senator Mike Lee, the son of legendary US solicitor general Rex E. Lee, has long referred to himself as a “constitutional conservative.” He’s authored no less than three books on the Founders, and received plaudits from conservatives for introducing bills that aim to limit executive power.

But newly released texts between Lee and Trump chief of staff Mark Meadows in the aftermath of the 2020 election reveal just how fair-weather Lee’s loyalty to the constitution really is.

The texts, published by CNN, come from the goldmine of correspondence that Meadows handed over to the select committee investigating the January 6 Capitol riot (before he suddenly decided to stop cooperating). They show an increasingly desperate Lee pressing Meadows for proof to back up Trump’s lies that massive voter fraud swung the 2020 election to Biden.

Please give me something to work with. I just need to know what I should be saying.

Please tell me what I should be saying.

Throughout the exchange, Lee seems less worried about the potential danger of, you know, overturning the will of the American electorate than the frenzied way in which the so-called “Kraken” team—composed of Trump lawyers Rudy Giuliani and Sidney Powell—went about it. He’s down with subverting democracy, he just wants to do it legally.

Beyond illustrating Lee’s tenuous loyalty to democratic principles, the texts also underscore just how pathetic the effort to overturn the election actually was. Republican senators knew that Trump’s claims of voter fraud were based on flimsy evidence, even as they played footsie with his election lies to avoid becoming the targets of his ire.

In fact, Lee (presciently) urges Meadows to stop the Trump team from indulging in potentially libelous conspiracy theory. Instead, he repeatedly asserts, the team should focus on having state legislatures appoint alternate slates of electors to give the Senate pretext to throw out the legitimate electoral votes. “We simply have no authority to reject a state’s certified electoral votes in the absence of a (sic) dueling slates.”

Instead of Powell and Giuliani, both Roy and Lee point Meadows toward more-respectable-but-no-less-crazy law professor John Eastman, who authored several memos detailing a far-fetched scheme to toss out legitimately cast electoral votes on the day of the count.

But all Lee’s efforts to ingratiate himself with Trump proved for nought on January 4, 2021, when Donald Trump repeatedly ad-libbed that he was “a little angry” at Lee for declining to endorse the whackiest claims about the election.

“I’ve been spending 14 hours a day for the last week trying to unravel this for him,” Lee whined to Meadows. “To have him take a shot at me like that in such a public setting without even asking me about it is pretty discouraging.”

On January 3, 2021, Lee texted Meadows, “I don’t think the president is grasping the distinction between what we can do and what he would like us to do.” He continued, three days before a mob stormed the U.S. Capitol, in an attempt to disrupt the electoral vote count, “Nor do I think he’s grasping the distinction between what certain members are saying that sound like they could help him, but would really hurt him.”

Lee added: “I know only that this will end badly for the president unless we have the Constitution on our side.”