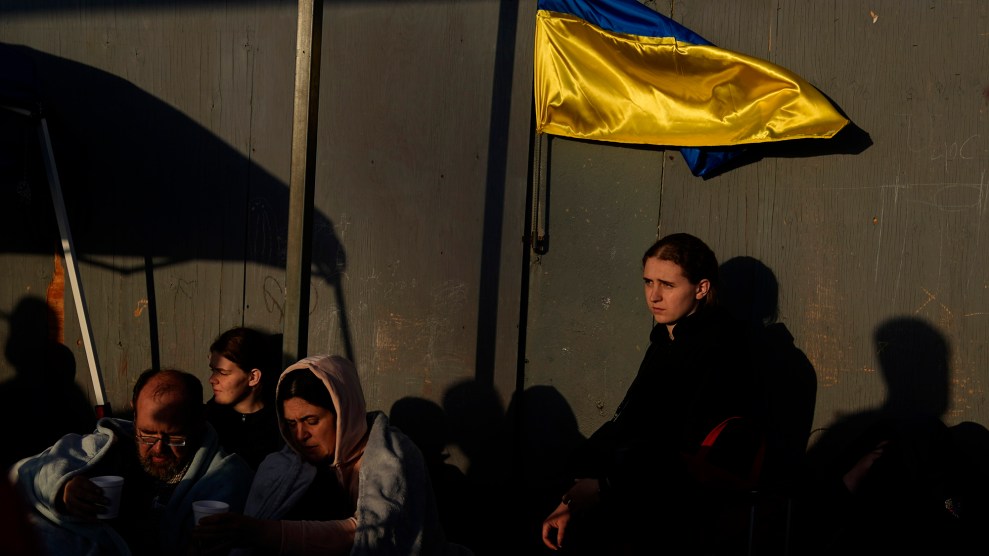 Ukrainian refugees wait near the US border in Tijuana, Mexico. Gregory Bull/AP

In the last two months, US border officials have processed about 10,000 undocumented Ukrainians at the US-Mexico border. This is pretty far from typical for asylum seekers taken in at the southern border in the last couple years—but the Biden administration made an exemption for asylum seekers fleeing war-torn Ukraine, allowing them to enter the country. The discussion around their entry has also been pretty far from typical—no screams of a “border crisis” or a “surge.” But, then again, the border narrative was never really about people like them. The border narrative is rather one that continues, again and again, to incite panic about an expected “flood” or “wave” of Black, indigenous, and brown asylum seekers.

The border narrative is rather one that continues, again and again, to incite panic about an expected “flood” or “wave” of Black, Indigenous, and brown asylum seekers.

CBS News first reported that US Customs and Border Protection “encountered” 9,926 Ukrainians in two months, with more than 750 migrants processed on April 6 alone. About 150 to 200 Ukrainian asylum seekers were allowed to enter each day earlier this month, according to reports. Most of them have presented themselves at ports of entry knowing that they will be admitted.

Now, consider the context: “Here’s what’s staggering,” said Aaron Reichlin-Melnick, senior policy council at the American Immigration Council, in a tweet. “The overwhelming majority” have been processed through the San Ysidro Port of Entry in San Diego “in numbers larger than we’ve seen that port of entry process in nearly 6 years.”

“This proves that we *can* process asylum seekers in large numbers,” said Reichlin-Melnick.

Here's what's staggering: the overwhelming majority have been processed through the San Ysidro port of entry, in numbers larger than we've seen that port of entry process in nearly 6 years.

This proves that we *can* process asylum seekers in large numbers at ports of entry. https://t.co/KmWnbntagS

So it looks like we could. We just don’t.

Last month, the Biden administration announced it would accept 100,000 Ukrainian refugees. But, as CBS News reported, “the administration has yet to announce any concrete steps to achieve the ambitious plan and expedite a visa and refugee process that typically takes months and years to complete.” So Ukrainian refugees are fleeing by plane to Mexico because they don’t need visas to enter the country, and waiting in Ukraine is simply too dangerous. Once in Mexico, they make their way to the US border to present themselves and request asylum. Ukrainians are having to wait in border cities like Tijuana and add their names to unofficial waiting lists similar to the waitlists that were formed for Central Americans starting in 2018. They have arrived in such large groups that Tijuana’s local government has set up a shelter for the 1,200 Ukrainian asylum seekers estimated to be in the city—also reminiscent of other Mexican-government shelters for Central American migrants in 2019. But because US border officials are not turning them away, Ukrainians are not having to risk their lives crossing in remote or dangerous areas of the border, like so many others have felt forced to do.

While not all people seeking asylum at the border will end up being granted asylum in a US court, they too would like a fair shot at seeking refuge.

While the circumstances are clearly different, over the years I have reported on horrific stories from families who have fled Central America, Haiti, Venezuela, and Mexico, and who also have had to leave their homes to stay alive. They landed in situations at the border where there was no real path for them to follow. There have often been no lines to get in, though they are told to “get in line,” and there are no exceptions once they got to the border. And while not all people seeking asylum at the border will end up being granted asylum in a US court, they too would like a fair shot at seeking refuge. After all, asking for asylum is legal under US and international law.

Instead, it seems like every time there is an increase in the number of Black, brown, and indigenous migrants and asylum seekers at the border, it’s painted as an invasion and turned into a “border crisis” for the sake of politics and point scoring, rather than a logistical challenge and humanitarian crisis. Back in 2018, when migrant caravans from Central America brought the total number of migrants seeking asylum at the border to more than 5,000, the Trump administration sent National Guard troops to stop the “invasion.” Fox News and anti-immigrant pundits and politicians sparked fear in Americans by using images of hundreds of Guatemalan or Honduran migrants waiting for their chance at petitioning for asylum to show an urgent “border crisis.”

And that didn’t stop then. Remember how the country responded to thousands of Haitian migrants at the border last year? And just two weeks ago, the screaming started all over again when the Biden administration announced it would put an end to a temporary Trump-era policy from 2020 that was supposedly meant to stop the spread of Covid at the border and turn migrants back without screening or processing them, leaving most asylum seekers without an opportunity (and their legal right) to seek protection. Now, again, anti-immigration politicians and commentators are sharing images of large groups of mostly Latin American migrants and warning of “complete anarchy” at the border ahead of the end of Title 42—a “crisis without precedent in the recorded history of the modern nation-state.” Border Patrol Union leaders have gone on national TV to say that by ending Title 42 the Biden administration wants open borders because “they’re trying to change the demographics of the electorate” by bringing in immigrants of color. And, crucially, that there aren’t enough resources to process people at the border.

Rio Grande City Border Patrol agents encountered four large groups of migrants over the weekend near La Grulla and Roma that totaled more than 750! The migrants were from Cuba, Central and South America and more than half were single adults.https://t.co/yUqB7XPNwt pic.twitter.com/edo2ikJjum

Of course, the number of Ukrainians at the border is still way smaller than what we’ll likely see when Title 42 is repealed; in comparison, US Customs and Border Protection data shows an average of about 80,000 Title 42 expulsions in a recent two-month period.

But the difference in numbers simply cannot justify the difference in treatment. How the Ukrainians have been received means that when the government says there is no way to safely process tens of thousands of asylum seekers in a short time period, it just doesn’t really hold. “The expressed fears about a ‘rush at the border’ are more about optics than numbers,” Michael Paarlberg, an assistant professor of political science at Virginia Commonwealth University, tweeted. When governments devote personnel to process people in an orderly way, “it’s not an issue.”

“There are clearly double standards in public perception and press coverage of refugees, driven by race, nationality and religion,” Paarlberg added. A lot of the double standards, he explained, has to do with “the language being used by media and politicians painting them as an undifferentiated mass showing up at the border for no particular reason…But a lot has to do with how narrowly we imagine conflict and persecution. Violence from interstate war, however rare, is conflict. Somehow gang violence, cartel violence, domestic violence, is less real.” (Similarly, my colleague Isabela Dias has written about how this double standard has manifested in Europe since Russia invaded Ukraine.)

2 observations. 1) there are clearly double standards in public perception and press coverage of refugees, driven by race, nationality and religion. Press should be careful about language that dehumanizes certain people https://t.co/pnj8zw000t

Throughout the last two decades, no matter who is in the White House, there have been numerous “border crises,” and no matter the messaging from whichever administration is in power, migration will continue. In fact, it will likely increase as climate refugees, economic collapse, and political unrest explode across the globe.

To be clear, the argument is not that Ukrainians should not be allowed in. I believe they absolutely should—and the US government should increase and expedite refugee claims from Ukraine so refugees don’t have to travel halfway around the world to the US-Mexico border to escape a deadly, unprovoked invasion of their homeland. The issue here is that just like the Department of Homeland Security managed to process 10,000 asylum seekers from Ukraine in the last two months, it should also make more humane pathways to process asylum seekers from the rest of the world—some of whom have been waiting at the border for months or years.