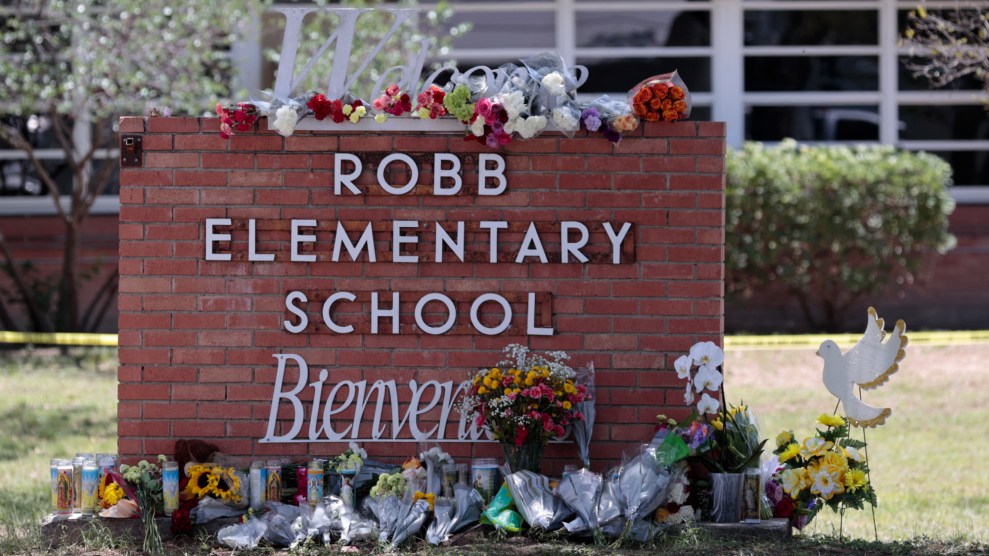 The welcome sign outside Robb Elementary School in Uvalde, Texas has become a memorial for victims of the tragic mass-shooting there on May 24, 2022. Aaron M. Sprecher/AP

How do we stop this? In the aftermath of Tuesday’s horrific tragedy in Uvalde, Texas, where a gunman shot and killed 19 children and 2 adults, that question has followed a frustratingly similar script as past mass shootings. Liberals pled, to mostly deaf ears, for gun control laws in the one country where this happens. Conservatives pled for more guns, pearl-clutching about the politicization of a tragedy born of political decisions. Recently, there have been mass shootings in Buffalo, New York and Laguna Woods, California. In New York City, a man shot and injured 23 people at a subway station in Sunset Park.

Over the last few months, we have not even had time to finish a cycle of mourning and remembrance before another shooting happens. Each is met with reality–defying talking points from Republicans. Rinse and repeat. More death.

And so to use this as a moment for shitposting would be obviously obscene when many are genuinely desperate for a solution.

Because this most recent shooting occurred, like Sandy Hook and Parkland and so many before it, in a school, some conservatives are adding a disgraceful, yet altogether unsurprising, wrinkle to the mix: It’s the schools themselves that are the problem.

Writing in The Federalist on Wednesday, staff writer Jordan Boyd argued that Tuesday’s tragedy made a “somber case for homeschooling.” More specifically, Boyd singles out “government schools” as the culprit. “The same institutions that punish students for ‘misgendering’ people and hide curriculum from parents are simply not equipped to safeguard your children from harm,” wrote Boyd.

Boyd continues, “You can’t protect your kids from everything. There’s no telling when a crazy gunman might open fire in a movie theater or a grocery store. You can, however, do your best to prevent them from being sitting ducks at frequently targeted locations such as schools by keeping them by your side.”

This is an unserious argument made in bad faith. The gunman at Sandy Hook was homeschooled. Initial reports of good guys with guns on the scene in Uvalde, do not fill one with confidence, either. Videos show police officers more concerned with restraining parents than with rushing in to stop the shooter. But, perhaps most importantly, Boyd is hiding the ball.

The article is using a horrific tragedy to shoehorn in another argument against public schools. These are the same people who have spent the last year leading an assault on public schools through the dueling moral panics of schoolteachers brainwashing children with critical race theory and sexually grooming them. The Federalist has often written about and boosted homeschooling as a bulwark against the idea of big government and has dutifully covered the critical race theory and grooming stories. The goal, with all of this, as the CRT-panic architect Christopher Rufo has repeatedly stated, is to rally parents behind a plan to “lay siege to the institutions,” with public education first on their proverbial hit list. Do they hate public education because it fails to protect children? Because it actually fills kid’s heads with bad ideas about race or gender or sexual identity? Or do they just hate public education because it’s public?

How to go about enacting, let alone passing, effective gun control in a country with a historically unprecedented number of firearms is, to be sure, a thorny and complex issue. Only in a monstrous society would children be so often sent to their death at the place they go to learn and socialize. Fixing the problem and its underlying issues deserves far more than a shoulder-shrug emoji in written form.

And so to offer a solution that is little more than part of a continuing war on public education? That makes a “somber case” for the nihilism of some on the right that allows them to use anything for their war on public schools—even mass shootings.