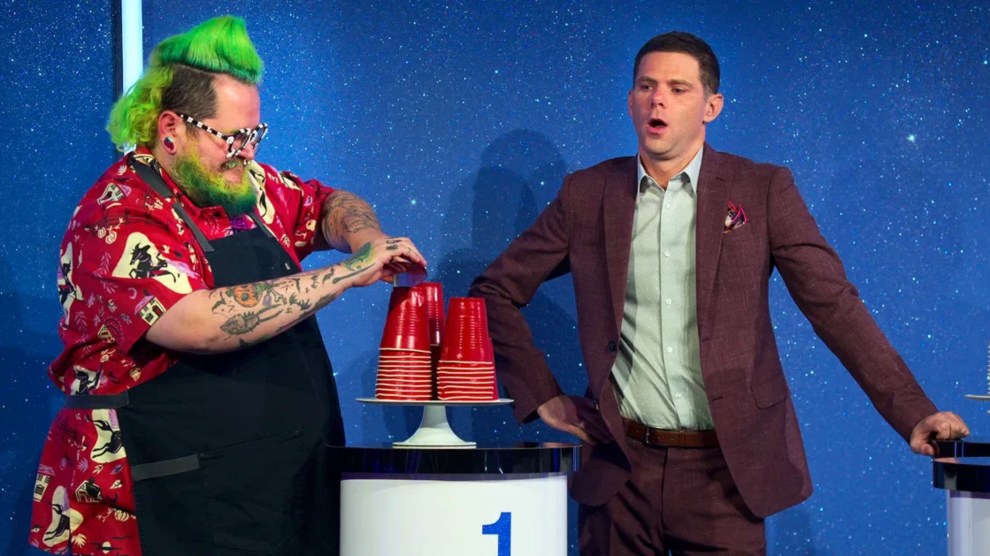 "Is It Cake?" contestant Andrew Fuller, alongside host Mikey DayNetflix

When it comes to reality television, my bar is pretty low. Love Island? Great. Dancing With the Stars? Fantastic. Antiques Roadshow? Mesmerizing. Too Hot to Handle? Gold. Almost nothing is too stupid for me to enjoy. So if I have time after a long day of doing journalist stuff to settle in for some television, chances are, it’s going to be trashy.

I understand, however, that these shows aren’t for everyone. And for the most part, I keep my love of reality TV to myself. It’s sort of like cheap wine: While I will happily dip into an opened, week-old bottle of Two Buck Chuck alone on a Tuesday night, I most certainly wouldn’t bring that to, say, a dinner party with friends. Other people have standards.

But there is one show that I’ve found myself talking about to anyone who will listen: The gripping—and surprisingly wholesome—Netflix baking competition Is It Cake? (Warning: spoilers ahead.)

Honestly, I didn’t expect much from this show. At its most basic level, Is It Cake?, which premiered in March, is a contest between nine bakers to make hyper-realistic cakes that look like things that are not cake: designer bags, bowling pins, shoes, luggage, steak, sea shells, etcetera. If a panel of celebrity judges can’t pick the cakes out of a lineup of real objects, the bakers win some cash—and increase their odds of winning the Grand Prize of $50,000.

If you’ve spent any time on social media during the pandemic, the show’s premise may sound familiar. As Slate‘s Cleo Levin wrote shortly after Is It Cake? aired, it’s basically a rip-off of an internet trend: “[T]he show’s source material is a meme, developed from the mega-viral series of realistic cake videos of the last couple years.” In short, someone saw one of those viral videos and thought, Let’s make it into a Netflix show. It’s absurd.

The writers of the show, to some extent, seem to be aware of this. Is It Cake? knows it’s a show about items made out of cake—and leans into the ridiculousness. This is best exemplified by the self-deprecating humor of the show’s host, comedian Mikey Day, “one of the white guys on SNL,” as he puts it, whose primary job responsibilities include making (at times, cringey) jokes and slicing open cakes with a really big knife. “That’s right,” he says in one of the episodes. “They gave an idiot a machete.”

But what makes Is It Cake? great isn’t the cake art or the cake jokes or even the tension of who is going to win. It’s the cast members themselves, who, even as they compete, root for each other. In the first episode, for instance, after fooling the judges with a taco cake, TikTok-er Jonny Manganello is given the opportunity to win $5,000 if he can distinguish between a sack of cash and a cake that looks a heck of a lot like a sack of cash. He guesses correctly, and his competitors burst into applause. “You guys are so nice!” he says. In episode five, Day holds a brief “graduation ceremony,” complete with a cap and tassel for 18-year-old Justin Ellen, who missed his high school graduation to appear on the show. And when finalist Hemu Basu is asked which of the eliminated bakers she would like to bring back into the competition to assist with a final cake, she chooses Dessiree Salaverria, because “[Salaverria] wanted one more chance to show her skill to her daughter.” Then, there’s Andrew Fuller aka “Sugar Freakshow” who becomes emotional after securing a spot in the finale: “I’m always, like, the weirdo and the oddball who people don’t take seriously,” he says, his eyes filled with tears. “And I’m just not used to being the one that people consider the best. And it’s crazy ’cause these are incredibly talented people and I just feel incredibly honored…I love you guys.” Is It Cake? may be the most wholesome reality television show I’ve seen since the Queer Eye reboot aired in 2018.

Perhaps it’s unsurprising that a show like Is It Cake? would resonate with audiences—it ranked in Netflix’s top 10 most popular shows in English for four weeks—at a time of so much conflict and uncertainty (see: Covid, Ukraine, abortion rights, gun violence, the economy, [insert latest crisis here]). When normalcy has dissolved, a bizarre show about cake just…makes sense. Or maybe, after the last two bitter years, we all just needed something sweet. Either way, I’m pleased to report, Is It Cake? has been renewed for another season.