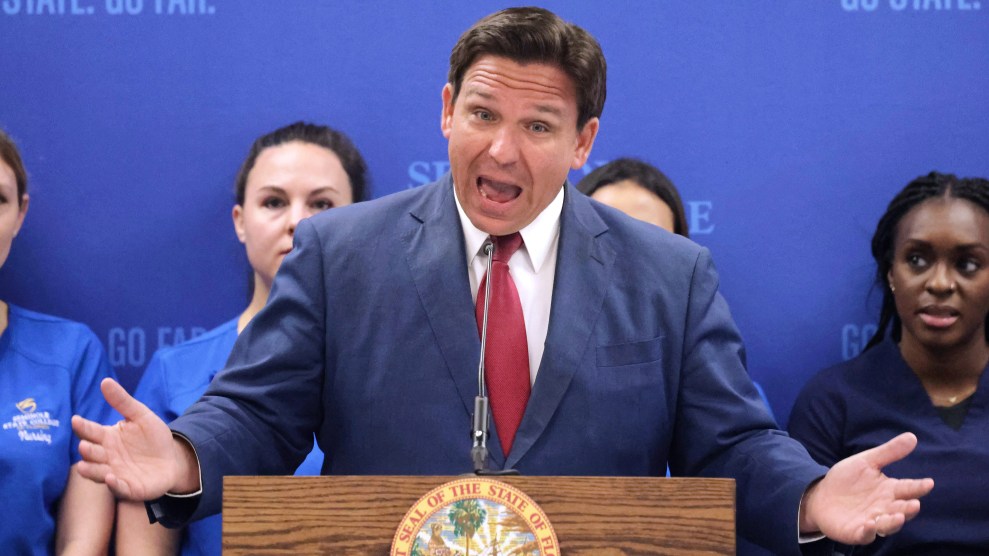 Ah, early June. The weather is warm, the water is fine, and Florida Gov. Ron DeSantis is casually doing the most diabolical shit.

You name the progressive cause, and DeSantis has taken substantive steps to stymie it over the past few days, waging attacks on everything from gun control to vaccine mandates to trans rights.

Yesterday, DeSantis joined a growing contingent of Republican governors who are trying to make it harder—or impossible—for trans kids to access gender-affirming medical care. His method is bureaucratic. Unlike in Texas and Alabama, DeSantis wants to circumvent the state legislature by placing the decision in the hands of the state Board of Medicine. The Florida Health Department, led by Surgeon General Joseph Ladapo, has made clear that it opposes these medical procedures. In a letter, the Board of Health requested an opportunity to “establish a standard of care” to curtail what Ladapo described as “complex and irreversible procedures.”

As my colleague Samantha Michaels has reported, treatments like puberty blockers and hormonal therapy can greatly reduce the risk of anxiety, depression, and suicidal ideation among trans kids. “Typical gender-affirming treatments for kids are deemed safe and effective by major medical associations like the American Medical Association, the American Psychological Association, and the American Academy of Pediatrics,” she writes.

The cherry on top? Hours before the Florida Board of Medicine issued its letter, the state Agency for Health Care Administration issued a controversial report that suggests that gender-affirming care is ineffective for people of all ages. The existence of the report threatens to ban Medicaid coverage of these treatments. As the Kaiser Family Foundation has reported, transgender adults tend to report lower household incomes and higher rates of unemployment than cisgender adults—which means they are likely to rely on Medicaid at higher rates than cis adults.

So, in multiple ways, DeSantis and his administration have tried to tamp down on gender-affirming care without even having to vote on it in the legislature.

As if that weren’t enough, DeSantis turned his crusade on, uh, the Special Olympics. The organization had a vaccine requirement for the games set to be held in Orlando this weekend. This makes sense, since, according to the Centers for Disease Control and Prevention, people with disabilities might be more likely to get Covid, and those with underlying medical conditions have a higher risk of becoming severely ill.

But Florida has a law banning vaccine mandates, which allowed it to threaten the Special Olympics with a $27.5 million fine, according to ABC News reporter Jay O’Brien. Not wanting to stir the pot, the organization dropped its vaccine requirement.

SCOOP: The State or Florida threatened the Special Olympics with $27.5 MILLION in fines because the organization had a vaccine requirement at its games in Orlando this weekend.

And, lastly, in DeSantis’ world, free speech is all well and good, except when it comes to a baseball team advocating for kids not getting shot in school. The Tampa Bay Devil Rays, which has a pitcher from Uvalde, where 19 children and two adults were killed in a mass shooting last week, made several social media posts in support of gun control during its May 26 game. Among them was a pledge to donate $50,000 to Everytown for Gun Safety’s Support Fund, which promotes education, research, and litigation to reduce gun violence.

Days later, DeSantis vetoed state funds for a new practice facility for the team. I wonder why.

DeSantis’ actions could be cast as just more culture war, as if all these actions against gun control, vaccine mandates, and trans care were designed to gin up his base. But it’s not all talk: These decisions will have material consequences for the most vulnerable Floridians.