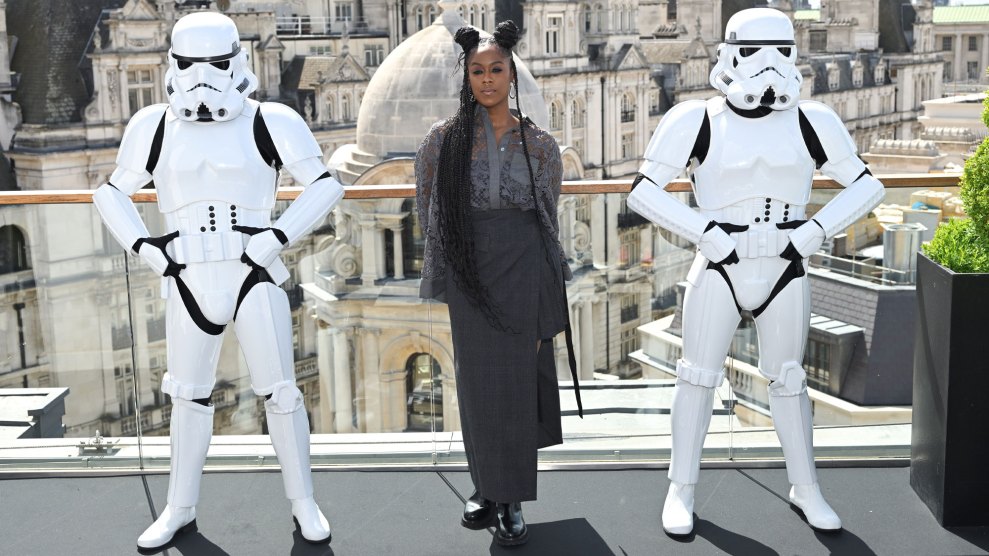 It’s like clockwork. A harvesting of Star Wars IP is announced; a cast list is released; a horde of fans abuse an actor of color for daring to be in the franchise.

This time the racists crawled out of their hidey holes and took to social media to abuse actress Moses Ingram. Ingram faced the barrage after it was revealed she would play “Reva” in the new Obi Wan Kenobi mini-series. People called her a “diversity hire,” the N-word, and a slew of other race-based insults. Some even threatened her life.

Disney defended the actress. And, eventually, Ingram addressed the abuse herself, posting a response on her Instagram story.

“Thank you to those who’ve stepped up to defend me,” she said. “And to the rest of y’all, y’all are weird.”

Ingram is only the latest person in a long string of actors who’ve been tormented by racist fans. We see this happen to actors of color in science-fiction and fantasy franchises over and over and over again. Just a few months ago, 12-year-old Leah Seva Jefferies had to contend with a similar bout of online harassment after being cast in the new Percy Jackson and the Olympians TV series. Jefferies, a Black girl, is slated to play Annabeth Chase, a character who was white in the novels the series is based on.

But the Star Wars fandom is especially notorious for bullying and harassing towards cast members they don’t like, especially if they’re an actor of color. In 1999, Ahmed Best secured a role in the Star Wars prequel film, The Phantom Menace, playing the infamous character Jar Jar Binks. While the character was rightfully criticized for being a hodge-podge of numerous racial stereotypes, a lot of that backlash unfairly fell on Best.

In a story for ABC News, Best describes how the toxicity almost pushed him to take his own life. At one point, the actor found himself on the edge of the Brooklyn Bridge.

“As a Black man from New York City, from the Bronx, there’s this façade that I can’t be hurt,” said Best. “In actuality, I was really just crumbling inside.”

In 2014, the teaser for the much anticipated Star Wars sequel The Force Awakens dropped. The first image that millions of fans saw was of the Black actor John Boyega, in the middle of a desert planet, decked out in the iconic, white Stormtrooper uniform. It outraged some fans. They called it “anti-white” propaganda. In response, the hashtag #BoycottStarWarsVII was created, with racists claiming that film promoted “white genocide.”

“I’m in the movie,” Boyega said in response. “What are you going to do about it?”

Four years later, actress Kelly Marie Tran endured a similar experience. Tran, who is Vietnamese-American, played the character Rose Tico in the movie The Last Jedi, the second installment in the sequel trilogy. After the films’ release, she also faced a hoard of sexist and racist insults online. In an essay for the New York Times, Tran detailed how those insults affected her mentally and emotionally.

“Their words reinforced a narrative I had heard my whole life,” she wrote. “That I was ‘other,’ that I didn’t belong, that I wasn’t good enough, simply because I wasn’t like them.”

In the following movie, Tran’s role was scaled down significantly, with many speculating that this was in response to the backlash. However, the film’s co-screenwriter has said this was due to editing and bad CGI.

Unlike with Boyega and Tran, Disney stepped forward a bit more directly to support Ingram, saying that they’re proud to welcome her to the family and denounced anyone who made her feel “unwelcome.”

Sorry, Star Wars, you seem to have lost it.

There is no room for wokeness in the Galaxy. https://t.co/KAxuSn6RpN

In a video that was posted on the official Star Wars Twitter account, McGregor stated that there’s no place for racism in this world and that he stands with Moses.