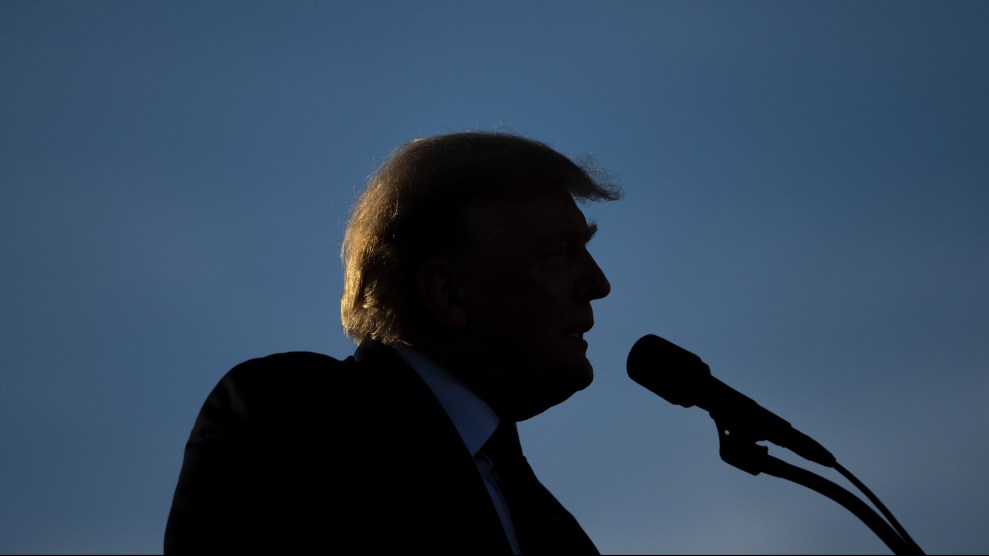 This week, my colleague, DC Bureau Chief David Corn, released his new book, American Psychosis: A Historical Investigation of How the Republican Party Went Crazy. And early reviews are coming in.

“I have been dying to read [American Psychosis] since I heard it was coming out,” MSNBC host Rachel Maddow raved during Monday night’s broadcast. “What David Corn is writing about—in his irreducible, ineffable David Corn way—is this cautionary tale for what’s happened today. And also a reminder that we’ve dealt with some of these dynamics before.”

During the hand-off with MSNBC host Lawrence O’Donnell, Maddow added: “[Corn is] a great journalist. I love the way he thinks. I love the way he writes. I’m so glad he’s done a super-readable, modern history of the right… We just need smart, digestible history about this stuff right now.”

During the hand-off with @TheLastWord, O'Donnell and @maddow keep the praise coming. "I'm so glad he's done a super-readable, modern history of the right… We just need smart, digestible history about this stuff right now." pic.twitter.com/Ie0aoWcOl5

David also appeared on MSNBC’s Morning Joe to discuss the book’s main point: For over 70 years, the GOP has been exploiting and encouraging far-right extremism. That is, it didn’t start with Donald Trump. David noted he was particularly interested in the response of host Joe Scarborough, a recovering Republican, to the book’s account of the dark side of the GOP. “It was never this bad. How did it get this bad?” asked Scarborough.

"I'm gonna give them the bloodiest red meat I can."@DavidCornDC does the homework on @Morning_Joe. Take a listen. pic.twitter.com/D0Dkt2A4sc

Mary Trump observed, “In his brilliant new book American Psychosis, David Corn reveals the historical roots of our current crises and the GOP’s decades-long descent into extremism and paranoia. An important, timely, and excellent read.”

Rep. Adam Kinzinger, the Illinois Republican who sits on the January 6 committee, said, “The name American Psychosis is perfect for the moment we’re in.”

The book quickly landed on the Amazon bestseller list ahead of The Very Hungry Caterpillar. (Yes, that’s still a bestseller.)

And don’t miss David’s description of his new book in the latest edition of Our Land, his exclusive, twice-weekly newsletter that delivers a no-BS analysis of the news of the day. (Make sure you sign up here!):

I just realized that the subtitle is a bit of a misnomer, for the book, which chronicles how the GOP has encouraged and exploited right-wing extremism for at least seven decades, shows that the Republican Party has always been somewhat crazy—at least since World War II. That is, if you define “crazy” as the acceptance and promotion of irrationality, bigotry, paranoia, conspiracy theories, and other elements of fanaticism. This has been part of the Republican brand and its strategy since the Red-baiting days of Nixon and McCarthy. Donald Trump just placed it front and center and made the red meat even bloodier. If you want a taste—of the book, not the red meat—check out the cover-story essay adapted from American Psychosis in the latest issue of Mother Jones here. As I researched the history of the GOP’s dance with extremism, I came to see that an article could not do it justice. It took an entire book.

One point from the book that seems especially relevant these days is that the GOP and the right has long employed a diabolical and demagogic tactic: accusing Democrats and liberals of purposefully seeking to destroy the United States. This was the heart of McCarthyism. Americans—who happened to be Democrats—were actively in league with the evil Soviets and plotting to bring about the downfall of the nation. McCarthy wasn’t referring to a small spy ring here or there. He pointed his crooked finger at the whole class of elites and Democratic officials, including members of the Cabinet. It was a lie, but millions believed him. Ronald Reagan embraced the New Right and the religious right that each denounced liberals, Democrats, and gay people for scheming to demolish America and Christianity. Both George Bushes did the same with the Christian Coalition, led by Pat Robertson who pushed the loony, antisemitic conspiracy theory asserting that a cabal of bankers, top government officials, the Rothschild family, and others were conniving to impose a one-world, collectivist dictatorship on the entire planet to assist Lucifer. The tea partiers—endorsed and exploited by John Boehner and other Republicans—declared that Obama was a secret Muslim socialist conspiring to annihilate the US economy so he could then impose a dictatorship. (Death panels! Concentration camps!) Trump in the 2020 election assailed Joe Biden for joining with antifa, Marxists, radicals, Black Lives Matter activists, and others to drive the country into “far-left fascism.” In each of these instances, Republicans vilified Democrats as internal and subversive enemies aiming to raze America. The threat within—it’s been a common theme for Republicans for decades. We see it today, as the right pushes panics over CRT and the Great Replacement Theory and accuses Democrats of pedophilia.

Spending over a year researching and writing American Psychosis has bolstered my belief in the importance of understanding history. In retrospect, this pattern—and others—is obvious. But once you recognize and acknowledge it, the task of countering such reckless and irresponsible political warfare becomes a tad easier. As I’ve noted before, at the start of this project I didn’t envision this book being so timely and relevant. Yet as a debate has ensued over the role of MAGA extremism in the GOP and the value of dubbing Trumpism a fascist—or semi-fascist—enterprise, this history provides a crucial context for this moment and for figuring out what should be done.

Grab a copy of American Psychosis at a bookstore near you. Or we recommend heading over to Bookshop.org, which represents independent booksellers. And of course, there’s always Amazon.

(Just to let you know, we have an affiliate deal with Bookshop.org, so if you click and buy through that link, a small share of the proceeds supports our journalism.)