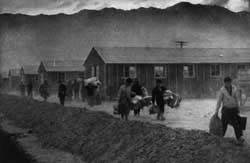 In 1988, Congress tried to close one of the darker chapters in U.S. history by passing the Civil Liberties Act. The CLA entitles veterans of the World War II internment camp program — under which the government relocated and imprisoned 120,000 Japanese Americans for the duration of the war — to $20,000 in reparations and a letter of apology from the president. The law also gave camp veterans 10 years to apply for redress.

But the CLA failed to address a little-known fact: The U.S. secretly pressured 13 Latin American countries, including Peru and Panama, to deport 2,264 of their citizens of Japanese descent to the U.S. camps. When these Japanese Latin Americans tried to collect under the CLA, the U.S. told them they were ineligible because they had been in the U.S. during the war as “illegal aliens.”

Not all Japanese Latin Americans are happy with the deal. Many camp veterans say that in addition to offering less in compensation, the U.S. has stacked the deck against them when it comes to collecting their due.

While the Department of Justice opened a full-time CLA office on the West Coast, distributed information booklets in Japanese communities, and held more than 200 workshops nationwide to publicize the CLA to Japanese Americans, it has done comparatively little to contact their Latin American counterparts.

“The [U.S.] government refused to do anything more than the absolute minimum,” says Paul Mills, a lawyer for the plaintiffs in the class-action suit. “They certainly didn’t go looking for class members, or make their vast information-gathering resources available to us in order to find them on our own.”

The notification efforts were particularly crucial because, while the U.S. argued that the CLA didn’t apply to Japanese Latin Americans, it said the law’s August 10, 1998, deadline did, giving Latin American camp veterans just two months to make a claim. And people who missed the deadline not only missed their chance at payment — they lost their right to protest. In order to appeal the settlement, Japanese Latin Americans must file for redress, and then, in a separate form, opt out. Already, one of the five plaintiffs has done that, filing a lawsuit against the U.S. for breach of trust and initiating another asking for $10 million.

But in the end, all this may be moot. After the settlement becomes final at a November hearing, the U.S. intends to pay Japanese Latin Americans out of the CLA trust fund established in 1988. Since not all Japanese American applications have been processed, the $5.5 million left in the fund may not cover all eligible Japanese Latin Americans. The settlement specifies that Japanese Americans are entitled to redress first.