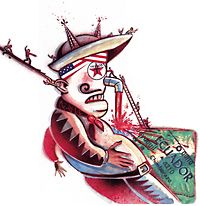 Is Texaco a pirate, raiding defenseless victims and stealing their riches with impunity? That’s essentially what a U.S. District Court judge must decide in a billion-dollar lawsuit filed by a group of indigenous Ecuadoran tribes against the United States’ fourth-largest oil company.

Anyone who’s visited El Oriente, the eastern region of Ecuador near the Andean nation’s borders with Peru and Colombia, will find much that sounds familiar in the tribes’ claim against Texaco. Hundreds of waste pits ooze toxic effluent into a once pristine and diverse rainforest ecosystem. Oil-field access roads bifurcate wildlife habitats, while their waste-oil-coated surfaces leave locals’ bare feet blackened and blistered. Rivers and streams are contaminated, their fish dead or dying, their waters unsuitable for drinking or bathing. (Meanwhile, precious rain, the tribes’ main source of drinking water, is contaminated by smoke from oil fires and gas flares that send ashy particulate wafting in every direction.) A 500-kilometer-long pipeline cuts through forests and farms, occasionally rupturing to spill millions of gallons of oil.

Texaco disputes those claims, and the Ecuadoran government — perhaps wary of putting off other would-be foreign investors — has declined to press the company for further reparations. Since Ecuador’s ineffectual legal system doesn’t provide for class-action lawsuits, no environmental polluter has ever been saddled with a fine of more than a few thousand dollars. Thus, for all practical purposes, the tribes have no effective domestic venue in which to pursue their claim.

But that doesn’t mean they are without recourse. The tribes’ lawyers have seized on an arcane 18th-century law in an effort to pursue Texaco on its home turf. The Alien Tort Claims Act (ATCA), enacted by Congress in part to prosecute high-seas pirates who once sought refuge on our shores, was revived in the early 1980s to allow foreigners to go after human rights abusers from their countries who had since fled to the United States. For example, the law was used successfully in 1980 to prosecute a Paraguayan police general living in New York who was suspected of torturing and murdering the son of a dissident. Just this year, a group of Filipinos won a $150 million judgment against the estate of former Philippine dictator Ferdinand Marcos, whose regime tortured thousands.

Strengthened by a series of international treaties and declarations guaranteeing human rights in the wake of World War II, cases like these have helped solidify the notion that human rights are protected by international law — and therefore U.S. law. Yet until the Texaco case, no one had argued that these same international laws must also guarantee environmental rights. “The argument is that environmental devastation is a human rights violation,” says Martin Wagner, an environmental lawyer who wrote a brief supporting the tribes’ claim. “Texaco and other multinationals are exploiting [weak laws in other nations] for their own gain. In the course of that, they’re causing great harm to people who are powerless to stop them. That’s essentially what a pirate does.”

In their arguments to the court, the tribes’ lawyers point to an environmental declaration — recognizing that human beings are entitled to a “healthy and productive life in harmony with nature” — that was ratified by 178 nations at the United Nations Conference on Environment and Development in Rio de Janeiro seven years ago. Just like the body of international laws and treaties establishing human rights, Wagner argues, the Rio treaty was “one in a series of agreements showing that nations recognize environmental rights as being universal.”

Whether or not the court agrees that Texaco violated such rights, a decision to allow the tribes to argue their case in the United States would bolster the notion that environmental injustice is prosecutable under international law. Such a judgment would undoubtedly embolden other foreigners to sue U.S.-based multinationals here in the United States, holding the companies’ feet to the fires of American justice.

The danger, of course, is that the United States could become the world’s environmental policeman, taking up the slack for countries lacking the laws or legal fortitude to prosecute environmental pirates. And while many of those scofflaws are U.S.-based corporations, those that aren’t will still be free to pollute without fear of meaningful prosecution. Ecuador’s tribes could go after Texaco or other U.S.-based companies that pollute their homeland, but they’ll still have little chance of prosecuting other foreign companies — not to mention those controlled by their own government. Meanwhile, U.S.-based companies such as Texaco will undoubtedly complain that the world’s economic ground rules are unfairly rigged against them.

In the end, say corporate-responsibility experts, the best way to control environmental piracy is to build strong international standards into future trade agreements. “There’s going to have to be a new deal that links free trade policies with environmental obligations on the companies that benefit from those policies,” says Daniel Seligman, director of the Sierra Club’s Responsible Trade Campaign. “The first step will be to impose unilateral obligations on the foreign subsidiaries of our own corporations. It’s a stretch, but international standards always start with unilateral action.”

The effort is sure to be uphill. Previous attempts to incorporate effective environmental standards into NAFTA, GATT, and other trade agreements have failed, and the World Trade Organization has ruled that such provisions are inconsistent with international trade rules. Activists hope to change the tide by pushing Congress to resist trade deals that don’t incorporate tough environmental standards, as well as to adopt laws that explicitly allow foreigners to sue their nemeses here in the United States. Meanwhile, they say, corporate shareholders outraged by a company’s behavior overseas must increase pressure on management to act more responsibly, while consumers should organize boycotts and media campaigns that hit environmentally irresponsible companies where they feel it most — on their bottom lines.