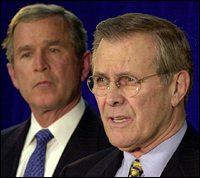 When President Bush tapped Donald Rumsfeld for defense secretary, he signaled his intention to assign this well-seasoned Pentagon veteran the task of selling missile defense to Congress and US allies. Although his proposed plan appears to be similar to Ronald Reagan’s original Star Wars vision, Bush has yet to reveal any specifics except that it should be able to “protect all 50 states and our friends and allies and deployed forces overseas.”

Technically speaking, there’s nothing to sell just yet. The system has failed two of its three intercept tests. Regardless of whether it succeeds in its next one this spring, serious questions remain about the system’s ability to defend against real-world threats in which an attack would be accompanied by countermeasures and decoys.

Cost estimates for the limited NMD system currently being tested range from $60 billion to $120 billion. A full-scale missile defense “triad” consisting of sea-, space-, and ground-based interceptors — the system Bush and his Republican colleagues are advocating — could cost $240 billion or more.

Even if the NMD system can be made to work on the military/technical level without breaking the budget, a hasty decision to deploy NMD poses grave risks to global stability.

Deployment could derail Russian President Vladimir Putin’s offer to reduce US and Russian nuclear arsenals to 1,000 strategic warheads each, and would almost certainly provoke new nuclear weapons production by Russia and China. As the government’s top intelligence analyst on missile proliferation suggested last summer, deployment of an NMD system would set off “an unsettling series of political and military ripple effects … that would include a sharp buildup of strategic and medium-range nuclear missiles by China, India, and Pakistan and the further spread of military technology in the Middle East.”

Clearly, Rumsfeld has his work cut out for him. But he’s just the man for the job. His close involvement with conservative think tanks and missile defense contractors allies him with the lobby that has promoted missile defense for decades.

Despite Rumsfeld’s reputation as a moderate Republican, when it comes to national security issues such as missile defense and nuclear-arms control, he is an ideologue in moderate’s clothing.

Rumsfeld’s most-praised recent work was his key role in leading the congressional panel charged with assessing the ballistic missile threat facing the United States. The 1998 report asserted that, within five years of deciding to do so, a rogue state such as North Korea or Iran could acquire a ballistic missile capable of reaching the US. Previous CIA estimates had placed the timetable at 10 or 15 years. The report painted the ultimate worst-case scenario, ignoring all of the real-world obstacles Third World countries face in trying to obtain a long-range ballistic missile capability, and playing up any factors, however remote, that might increase their chances of getting usable ballistic missiles in a shorter time frame.

Though the report did not explicitly advocate missile defense, it gave Star Wars boosters in Congress the quasi-official endorsement they needed to push the program forward. Sen. Jon Kyl, an Arizona Republican and anti-arms control hardliner, asserts that “The Rumsfeld Report was the main reason the debate was gradually turned around and the administration turned around.”

But the missile threat facing the United States has been exaggerated, to say the least.

North Korea, the main impetus behind the current push for an NMD system, has agreed to a moratorium of new missile tests, has begun rapprochement with South Korea, and has expressed willingness to limit its nuclear and ballistic missile programs as part of an agreement with the United States.

As US intelligence analyst Robert Walpole pointed out in testimony before Congress, a ballistic missile is the least likely way a foreign nation would choose to deliver a weapon of mass destruction to US territory, because ballistic missiles have a “return address” that would allow swift and devastating American retaliation.

Beyond the unrealistic threat assessment, few remarked at the time that Rumsfeld, the panel’s chair, was far from an objective analyst on this subject, given his parallel role as a card-carrying member of the missile defense lobby.

Rumsfeld is listed as an “informal adviser and faithful supporter” of the Center for Security Policy in its annual report. The Center, founded and directed by former Reagan Pentagon official Frank Gaffney, is a highly partisan advocacy organization that serves as the de facto center of the Star Wars lobby. Its 100-member advisory board is a virtual Star Wars hall of fame, including such luminaries as original Star Warriors Edward Teller and former Reagan science adviser George Keyworth.

The board also includes heads of like-minded, right-wing foundations such as William J. Bennett of Empower America and Henry Cooper of High Frontier. Rounding out the board are almost two dozen former and current members of Congress, retired military and defense officials, and six defense industry CEOs from Boeing and Lockheed Martin. The Center receives roughly 20 percent of its annual revenues from corporate sponsors, including generous contributions from top missile defense corporations.

Rumsfeld was awarded the Center for Security Policy’s Keeper of the Flame award in 1998 at a gala dinner attended by retired military officers, conservative political and foundation leaders, and representatives of missile defense contractors such as Lockheed Martin. Past recipients of the award include Sen. Kyl, Ronald Reagan, and Newt Gingrich.

The work of Rumsfeld and his associates has been backed up and supported every step of the way by the arms industry. During the past decade, the major weapons makers have made generous campaign contributions to key members of Congress and invested tens of millions of dollars in their already formidable Washington lobbying operations. Since 1997, the top four missile defense contractors have doled out more than $4 million in PAC contributions and almost $3 million in soft money. But this lavish giving pales in comparison with what these firms spend on lobbying each year: an estimated $18 million.

Rumsfeld’s appointment is great news for the motley collection of weapons makers and conservative ideologues who make up the Star Wars lobby. But unless he distances himself from the rigid views of his cohorts and makes a truly objective assessment of the ballistic missile threat to our nation, he could end up spending tens of billions of our tax dollars on a costly, unproven, and provocative missile defense initiative that could spark a new nuclear arms race.