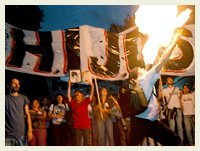 BUENOS AIRES — Rows of riot police stand in front of a ritzy apartment complex in Buenos Aires. Marching down the street towards them are their opponents: hundreds of protesters, many of them dressed as jesters with faces painted like the sun or moon, others with dreadlocks to their waists. A juggler tosses machetes into the air in rhythm to an insistent drum beat.

The marchers project the giddy air of a carnival, but behind the costumes and music, their purpose is serious: they have come to expose Leopoldi Galtieri, a former dictator of Argentina who has been living here hidden from public view since he left power in 1983. Galtieri is accused of helping coordinate a multi-national hit squad that kidnapped, tortured and killed human rights activists and guerrilla fighters throughout South America during his regime.

Police and protesters collide in the middle of the street, tear gas and clubs flying. Television cameras capture the violence, but also spread the protesters’ message. Amidst the melee, spray painted signs reading “A Torturer Lives Here”, “Murderer”, and “Put Him on Trial” denounce Galtieri; flyers provide his home address and even his social security number.

The demonstration, which took place last year, was typical of those a group known as HIJOS has organized around the country. The effects are typically felt the following day, says HIJOS activist Diego Genoud. “That’s when the baker won’t sell him bread, the taxi won’t pick him up, the newspaper won’t come to his house. It is like putting him in jail.”

Many HIJOS events end in violence. “The police come absolutely ready to strike at the most minimum provocation,” said Vilma Ripoll, the Buenos Aires city council member. “They plant infiltrators who then provoke the police so they can violently repress the march.”

HIJOS — Spanish for children and an acronym for Children for Identity and Justice — was born of the brutality of Argentina’s former military dictatorship. Its members are all children of former political prisoners, exiles, or someone executed or ‘disappeared’ by the dictatorship.

As many as 30,000 civilians vanished during the Argentine military dictatorship’s brutal 1976-1983 rule. A favorite method of disposing of political prisoners was to inject them with tranquilizers, manacle them together and dump them from cargo planes into the open sea.

Most of the victims were non-violent social activists: union organizers, writers, politicians, and labor leaders. Vilma Ripoll of the leftist party Movemiento Socialista de Trajabadores has a list of the disappeared that fills an entire wall in the party headquarters.

Many of those who perpetrated the dictatorship’s human- rights abuses were successively pardoned by a series of laws. This process culminated in the 1989 pardons signed by then-president Carlos Menem which freed the 277 perpetrators who had been jailed.

The out-a-torturer movement began in 1999, when neighbors recognized a skinny, bespectacled man jogging in a Buenos Aires park as Jorge Videla, former army general. Videla — who had been convicted, then pardoned — is widely considered one of the principal architects of the Argentine dictatorship. Street activists began a daily ambush, tossing eggs and epithets like “assassin” and “kidnapper.” Videla’s morning jogs in the park were over — and with them his anonymous retirement. He has since been re-arrested on charges of stealing newborn babies from left-wing families, one of the few crimes not covered by the amnesty.

Since then, regional HIJOS groups have sprung up throughout Argentina. For the past 4 years, nearly every month one of the chapters has hit the streets to denounce the tranquil civilian life of a former official.

“We want all the murderers to go to jail with the political class that sponsored them, as well as the economic class that fueled the genocide — the same people who today run the country,” says Genoud, 25. Like many HIJOS activists, he didn’t learn of his parents’ political involvement for years, his guardians having tried to protect him at a time when information was dangerous. His father, a guerrilla resistance fighter, was taken prisoner in 1974 and jailed for 8 years. His mother, a human rights lawyer, was dragged from her house by a military squad in 1976 and disappeared.

While GenoudÕs goals are unlikely to be met, the pressure from HIJOS has helped keep alive the campaign to re-arrest top military leaders accused of involvement in baby kidnappings during the dictatorship. Dozens of military officials are now under investigation, and top armed forces leaders have publicly apologized for their role in the crimes.

Polls show HIJOS has found sympathy among the public, but some say their methods are dangerously close to vigilantism. “We have to respect our institutions, whether we like what they do or not,” says Antonio de Marco, General Secretary for the Union del Centro Democratico, a political party in Argentina. “The (demonstrations) attempt to override the law.”

The HIJOS demonstrations have inspired a similar out-a-torturer movement called “la Funa” (slang for “exposed”) in Chile. But though the group’s methods are similar, the political climate is not. “The dictatorship of Pinochet lasted 20 years and succeeded in changing the society far more than it did in Argentina,” explains Diego Ortolani, an Argentine HIJOS member who works with La Funa in Chile. “The movement doesn’t have the social legitimacy that it does in Argentina.”

Still, since its modest beginnings in October 1999, La Funa has grown from a timid gathering of 15 people to a raucous congregation of 500 to 1000 students and human rights activists. Their protests have brought criticisms from all sides of the political spectrum, including a criminal complaint filed by a right-wing legislator. Even members of the left-wing government don’t hesitate to blast the renegade tactics of the activists. Interior Minister Jose Miguel Insulza is an outspoken critic: “This kind of activity is totally inappropriate because it is reminiscent of past times when there was intolerance and violence. Popular justice doesn’t belong in a democracy,” he told the daily El Mercurio.

But for Ortolani, the lack of support isn’t a deterrent: “The lack of a public consciousness of these crimes [in Chile] is precisely what makes the outings so important — even more important than they are in Argentina.”