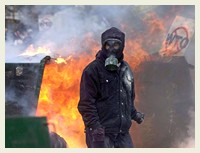 Already derailed by the war in Afghanistan, the movement against corporate-led globalization faces another challenge late next week, when more than 2,000 corporate leaders, heads of state and other members of the world’s financial elite gather in New York for the annual meeting of the World Economic Forum.

Some activists see the meeting as a vital opportunity to revive the movement against corporate-led globalization, which has struggled for direction in the wake of the Sept. 11 terrorist attacks. Still, the decision by WEF leadership to hold the 2002 meeting at New York’s Waldorf Astoria hotel presents those same activists with a quandary: How can a movement which has relied on provacative street actions to sustain its momentum stage protests in a still-shaken city without alienating the public at large?

The movement seized the world’s attention in 1999, virtual shutting down the World Trade Organization summit in Seattle with a high-profile campaign stressing non-violent direct action. Since then, similar tactics have been used to disrupt other global summits, such as the IMF/World Bank meetings in Prague and Washington and the 2000 WEF regional meeting in Melbourne, Australia. But the increasing trend toward violence and property destruction by militants — which culminated in smashed storefronts and police shootings of young activists in Gothenburg, Sweden and Genoa, Italy last summer — have put authorities in New York on edge. In fact, some activists say it is no accident the WEF chose to switch its annual meeting to New York from its regular haunt — the Swiss resort town of Davos. While WEF officials are publicly promoting the move to New York as a show of solidarity with the stricken city, it is no secret they were looking to escape the wrath of European activists, who for the last two years have transformed Davos into a security-planner’s nightmare. “It’s a brilliant PR move, to essentially dare the globalization movement to do anything in confrontation with the NYPD,” says Mike Dolan, deputy director of Public Citizen’s Global Trade Watch. “And I think it’s a potential PR disaster if we don’t agree on rules of engagement that are explicitly non-violent. The minute a provocateur puts a brick through a window in Midtown Manhattan, the media will grab onto it and that’ll be the story. In the post 9/11 climate, this is a trap.”

While vowing to allow peaceful demonstrations to go forward during the WEF summit, which starts Jan. 31 and ends Feb. 4, New York officials have vowed to crack down quickly and decisively if any protests turn violent. Activists say their threat is being exaggerated–the militants in Europe have always been far more hardcore than their counterparts in the US, and no one is expecting vast numbers of protesters to saturate the streets of New York. Still, With the New York Daily News already describing protesters as “crazies” and even the Village Voice portraying the New York police as “blue-collared multi-ethnic centurians” set to do battle with “jet-setting troublemakers,” activists concede they are swimming in hostile waters.

Nevertheless, many activists insist that it would be a mistake wrong to let the subdued mood in New York scare them off the streets.

“We want to highlight the hypocrisy of the WEF coming here to promote their agenda of corporate-led globalization, a system whose inequities help foster terrorism,” says Eric Laursen of Another World Is Possible, an umbrella group of mostly local student, left, peace, and direct action groups which formed to mobilize for the WEF meeting. “It’s amazing that they’re coming to a city which has been a victim of that. At a time when the city is facing cutbacks and recession, I think people should be outraged.”

With the House’s recent vote to grant the president fast-track trade authority and the effort to launch a new round of WTO talks following the trade summit in Qatar last fall, Laursen and other activists say they cannot allow the WEF to present its agenda unchallenged.

“If we back down now, we’ll send the message that the antiglobalization movement has been scared quiet,” says Brooke Lehman of Another World Is Possible. “I think it’s more important to come together and put our message out, knowing full well the media may spin it in such a way that’s unfavorable, but that’s a chance I think we have to take. We owe it to the other billions of people around the world who are suffering the effects of global capitalism and dealing with far worse repression than we are.”

Concerns about the potential for backlash have prompted many social justice and non-governmental groups to keep their distance this time. Groups such as Global Exchange and the Ruckus Society — both key players in Seattle — have opted instead to focus on participating at the World Social Forum, a grassroots-led counter-summit which is expected to draw tens of thousands to Porto Alegre, Brazil, next week.

Other groups, such as Friends of the Earth and Public Citizen, will host forums and debates in New York but have thus far steered clear of endorsing any street actions that do not explicitly denounce violence or property damage.

“The political climate has changed so dramatically, people are exercising caution,” says Colleen Freeman of Friends of the Earth. “What we’re trying to achieve hasn’t changed, but you have to be sensitive to everything that New York has experienced.”

Organized labor, a key component of the anti-globalization coalition in Seattle which has taken pains to show its support for the Bush administration since the Sept. 11 attacks, will be in New York to voice its dissent, too. On Thursday, January 31, AFL-CIO President John Sweeney and other labor leaders will host a forum on the global economy followed by a rally in front of a midtown Manhattan Gap store. Their aim is to link job layoffs and corporate bailouts in the US with sweatshops and growing inequities abroad.

“We want to tell the WEF that the corporate-driven economy is not working for working people,” says Simon Greer of Jobs with Justice, a coalition of labor, student and religious groups. “But we’re not endorsing any of the other rallies because of their anti-war language, and because we don’t want to get caught tangled up in any civil disobedience actions.”

Of course, relinquishing civil disobedience or establishing clear rules of behavior for all the protesters will be difficult if not impossible for a movement which largely prides itself on maintaining an open-ended “diversity of tactics.”

“No one’s planning on starting a fight with the cops, but we don’t want to create a situation where people are out of solidarity with each other,” says David Graeber of the Anti-Capitalist Convergence, a coalition of anarchist groups. “People overseas are this, and we feel like we’re under some obligation to do something, and to show that if you can do it now, in New York, you can do it anywhere. It’s scary, they’re going to kick our asses, but we’ve got to do it anyway.”

Still, even the radicals are toning down their rhetoric and actions. Instead of attempting to disrupt the summit with street lockdowns or human blockades, organizers say the emphasis will be on pageantry and street theater. Organizers expect thousands to participate in a flurry of teach-ins, rallies, and marches. Students are hosting a two-day conference at Columbia University from January 31 to February 1.

One group, Reclaim the Streets, plans to counter and possible police hostility with humor, organizing a “Tango Bloc” of activists dressed in aristocratic attire to satirize the WEF.

The wild cards in all the planning, of course, are the much-hyped anarchists, who are reportedly planning “creative and spontaneous” direct actions throughout the weekend that target specific corporations. City officials and some in the press have already predicted violence, but organizers say even the most militant of the anarchists recognize smashing windows in New York isn’t a good idea right now.

“Nobody’s talking about taking two-by-fours to Starbucks,” says Graeber, “though I wouldn’t rule out paint bombs.”