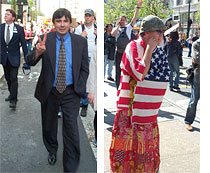 One week ago today, eight hours after the war had started, I awoke to the news that bombs were still falling and protesters were attempting to “shut San Francisco down.” It was only a little past dawn, but already, local radio anchors warned, dozens of bicyclists were roaming the city, blocking key intersections and, in some cases, chaining themselves together so that cops were forced to use power saws to separate and arrest them. I pulled the covers over my head and tried to pretend that none of this was happening. But the news kept vacillating between speculation about Hussein’s survival and updates about the havoc the protesters were causing to the morning commute. Sleep was impossible, and I resigned myself to a long, frustrating day.

Let me preface this by saying that while I believe war is sometimes necessary, the Bush administration has not, in my opinion, made either a tactical or a moral case to prosecute this war. And I’ve participated in demonstrations against the war. Furthermore, I walk to work, and the protesters were unlikely to cause me any personal inconvenience. It’s just that, the Bay Area’s culture of protest can be maddeningly counterproductive, whereby every demonstration against one thing becomes freighted down by every other cause–past or present, valid or dubious–in the progressive quiver. If I participate in a march against the war in Iraq, as I’ve done several times, why am I surrounded by signs supporting Mumia Abu-Jamal or against vivisection? The ability to stay on message is vital to any political cause, and yet the message that too many activists are most eager to convey is an individual one, of their own pet cause, their own noble conviction.

It was that culture of professional protest that I feared would encounter as I went downtown to cover the march. This was not meant to be a mass rally, but a series of direct actions attracting a more radical element. Furthermore, it was a workday, and thus a higher percentage of protesters were likely to be students or recent grads. And indeed, many protesters I initially encountered seemed determined to fulfill the stereotype of San Francisco activist.

“Off the sidewalks and into the street!” one young blonde woman in an embroidered blouse exhorted onlookers. “Guatemala, Che Guevara,” she shouted, employing her best sandalista accent. (“Oh, for God’s sake,” someone next to me muttered.) Others, perhaps having just rented “Hair,” brought flowers for the cops.

But far worse than the ’60s role-players, were those determined few who relentlessly taunted the police. Cries of “steak fajita”–referring to our local police scandal–prompted cops to laugh. But taunts of “Kent State” or “pig” or “fascist” were not only unfounded and recklessly provocative, but undermined the notion that protesters can support the troops–who like the cops, are just doing their jobs–while opposing the war. San Francisco’s police force, perhaps the nation’s most ethnically diverse and most experienced with demonstrations, started the day in good humor. But imagine you’re the 30-something Hispanic female officer I watched while some white kid called her a “Nazi” over and over. At first, she just rolled her eyes, a little bemused. But that kind of abuse gets old real fast.

His behavior was indicative of tiny, but extreme, minority who come to demonstrations spoiling for a fight. They can call themselves anarchists or radicals, but in the end, they just want to throw down. Just as there are always a few cops who, given any provocation, are going to crack heads. Even in a crowd of thousands, these two elements are guaranteed to find each other.

That happened Thursday when cops in full riot gear surrounded several hundred protesters and began slowing compressing them into a tighter and tighter portion of Market Street, giving no one–including tourists and workers on their lunch hour–a way to disperse. Coworkers and I spent a frantic 15 minutes trying to persuade the cops on the scene and via 911 that this was a very bad idea. On one side was a construction site, metal pipes and boards lay about; give people a way out before things get very ugly. Eventually one female sergeant began to listen, and police started to funnel people out onto Seventh Street. But it was too late. Somebody picked up a large metal bolt and threw it at a cop, injuring him. Officers clubbed a few people, and arrested scores more, many of whom were innocent bystanders just trying to get back to work.

And then the sour mood was magically broken by the sound of James Brown’s “Popcorn.” A trio of protesters had a sound system powered by four car batteries that they towed behind a bicycle bearing a “Question Internal Combustion” sticker. The war had started, said one of DJ’s, and we couldn’t hope to stop it now, only to make ourselves feel better as the bombs fell. “It’s noon, and it’s sunny,” he said simply. People danced; sometimes all you can do is get your war on.

For several hours, the march was jubilant. The anarchists were minding their manners, or off elsewhere causing mischief. Far from being annoyed, motorists and cable-car attendants honked their horns and rung their bells in rhythm with the anti-war songs. Bearing signs like “Only Pretzels Can Save Us Now,” the crowd wound through the Theater District, Nob Hill, Chinatown, chanting “This is What Democracy Looks Like!” Even if you felt democracy could use a stylist, it was hard not to believe that the protesters might still be able to prevent additional bloodshed, or perhaps the next war. The mass wended back down into the Financial District, and from the swank hotels and office buildings onlookers waved and flashed the peace sign. “Join us, walk out!” the protesters shouted. “Walk Out, Charles Schwab! Walk Out, JP Morgan!” And some of them did. Suits mingled with sandals, and for a while, it really did look like democracy. Better yet, a plurality.

But as rush hour began, the crowd thinned, the anarchists resumed their tactics, and tempers flared. Some 1,500 people were arrested that day, some for legitimate civil disobedience, others not. The protest lasted 18 hours and cost the city at least $450,000 in police overtime and cleanup. Mayor Willie Brown rightly pointed out that the city, facing deep cuts to education and other vital services, can’t afford to police the protests that organizers have promised every single day until the war is over. Protesters bearing signs exhorting President Bush to spend money on teachers, not bombs, would do well to remember that.

In the face of a policy with which you disagree, but can do nothing to stop, protesting can be empowering. But organizers and participants need to examine at what point this becomes little more than self-indulgence. Huge, inclusive marches do indeed send a powerful message. But what is shutting down the most liberal anti-war city in the country day after day after day–the stated, if not thus far achieved, goal of the protestors–supposed to accomplish, exactly?

There is a vital place for radicalism in any movement, and the direct actions that took place in front of the headquarters of Bechtel (which is in line for huge contracts to “rebuild” Iraq) and Chevron (which named an oil tanker for Condoleezza Rice) seemed wholly appropriate. But group vomiting in front of the federal building, petty vandalism, throwing rocks at cops… Such acts might get you on the news or earn you radical cred, but they marginalize the cause of peace and drive away those who might join you in it. San Franciscans need to remember that the rest of the nation reflexively dismisses the Bay Area’s politics as that of a self-indulgent and self-congratulatory constituency, stuck in the 60s and out of touch with the rest of the nation. To be successful in their goal of leading the nation toward a better world, local activists need to contradict, not confirm, such impressions.

At the head of the demonstration, the organizers had banners bearing a picture and a quote of Dr. King: “The greatest purveyor of violence in the world today [is] my own government.” I was reminded of the marchers in Selma, wearing their Sunday best, dignified in the face of brutality. Their nobility was impossible to dismiss; it shattered the stereotypes that previously allowed people to do so.

Do you want to make an impression on George W. Bush, on middle America, that cannot be dismissed? At the next march, leave the Che T-shirts, the kaffiyehs (unless you actually are Palestinian), the combat boots, the dog collar necklaces, and the cans of spray paint at home. Wear a suit. Bring your parents or grandparents. Treat the cops with respect, even if they don’t extend you the same courtesy.

Do that and a lot more people might get off the sidewalks and into the streets.