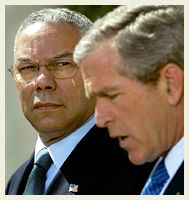 Of cruelty and suffering in the Middle East there is no end in sight, but the tragedy runs deeper than terror and the deaths of the innocent. The worst misery of the current impasse lies in its futility. For when this year’s’ river of blood has dried up, there, on adjacent soil, will stand two peoples bound to live alongside — if not exactly with — each other.

Any other future is either apocalyptic or fantastical, be it the “transfer” of Palestinians from the West Bank and Gaza, as envisioned by the Israeli right, or the sweeping away of the Jewish state, as envisioned by Hamas. These two blood-soaked peoples will go on glaring at each other in incomprehension and fury, sick with rage and fear, hostile and desperate, but still, if they are lucky, someday they will outgrow the need to threaten bringing the pillars of civilization down around them.

So all the mad slaughter of 2002 is futile. Sharon’s expeditions on the West Bank fuel more terror. Arafat’s evasions — and his failure to control the most militant Palestinians — make a viable Palestinian state more remote. On both sides are not only crimes but mistakes. Mindless leadership abounds, and not only in the Middle East. Sharon and Arafat have been joined in their destructive dance of futility by America’s blundering president, George W. Bush.

Obsessed with Saddam Hussein, eager to accomplish the overthrow mission his father defaulted on, full of grandiose designs against a nonsensical “axis of evil,” Bush spent 15 months walking away from the fire that was actually burning, the fire he could actually help douse. His idea of responsibility was to deny responsibility. He took the low road, pinning the Middle East problem on Bill Clinton.

Belatedly, Bush sent the underpowered Anthony Zinni to negotiate between Israel and the Palestinians while dispatching the overrated Dick Cheney on a fruitless mission to rope Arabs into another war on Iraq. Bush refused to send an emissary who had sufficient prestige to knock heads together and make progress toward both a political deal and a cease-fire, and Cheney’s hopeless call to arms only undermined Zinni’s hapless calls for peace.

In yet another terrible oversimplification, the Bush administration cheered on Ariel Sharon’s blundering campaign to “uproot terrorism,” a bootless enterprise when suicide bombs are so easy to manufacture and so many Palestinians are willing to strap them on.

Many, many killings later, Bush’s attention has finally come to rest on the Israel-Palestine cauldron. He has dispatched a US representative with significant clout — Secretary of State Colin Powell — and called on both sides to wise up. Whether the president’s intermittently forceful exhortations will gain a sincere hearing from the region’s bloody antagonists is anybody’s guess.

Having taken a first step, Bush must now be pressed to acknowledge the larger American responsibilities to come. The administration must not be allowed to make the search for Mideast peace a sideshow to its grand mission of toppling Saddam.

Could it be plainer that Israelis within pre-1967 boundaries are entitled to freedom from fear, and that Palestinian guarantees will not satisfy them? If the Palestinian Authority cannot be trusted to give them the safety they deserve — and it appears that it cannot be trusted — then international forces must report for police duty. The New York Times’ Thomas Friedman has boldly and rightly declared that American and NATO troops will have to help police any political deal.

Could it be plainer that, regardless of the errors and crimes of their leadership, the Palestinians on the West Bank and Gaza who have lived under Israeli occupation for 35 years need international intervention to bring them a measure of justice? The virtual shut-down of the Palestinian economy has continued to fuel the supply of murderous terrorists, and little will change unless there is a massive effort at reconstruction as well as honest policing. The US (along with Europe and the wealthier Arab states) must make a substantial contribution to these efforts.

For all the heartbreak of recent weeks, the elements of a solution are plain — and were tantalizingly within reach in the tragic closing months of the Clinton administration. The Palestinians deserve a viable, unoccupied, peaceful, sovereign state of their own headquartered in East Jerusalem. Israel must cease building settlements in the post-1967 territories and start dismantling the ones already built. Palestinian leaders must stop playing with the fiery fantasy of erasing “the Zionist entity.” Hamas and other terrorist groups must be suppressed and anti-Semitic propaganda must cease.

Surely there must be adults in Bush’s Washington who recognize that the alternative being proposed by some arch-conservatives — complicity in an all-out Israeli war against the Palestinians — is monumentally myopic. It has too much the look of the “crusade” that Bush proclaimed in an unguarded moment last September, only to be told that such talk was bad public relations. Surely, those same adults should recognize that a beneficial by-product of high-level diplomatic engagement would be the undermining of Saddam Hussein. Nothing could weaken the Arab world’s tolerance of his malevolent influence more than a political resolution of the half-century-old war between Israelis and Palestinians.

That such a resolution will be excruciatingly hard goes without saying. If it was hard with Barak at Israel’s helm, it will be that much harder with Sharon in power. Without a deep American commitment, a resolution is inconceivable. With it — we’ll find out.

American power has its uses. Let’s use it.