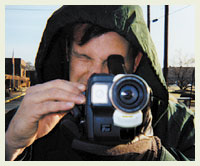 Last summer, a patient at the Hope Clinic for Women in Granite City, Illinois, was taken to a nearby hospital after complications from an abortion. Clinic staff tried to duck the half-dozen or so antiabortion activists assembled outside, but as they wheeled the patient to a waiting minivan, protester Daniel Michael called out to his wife, “They botched one!” and then rushed to take the woman’s picture. Days later, a clinic staffer was shocked to discover that the woman’s medical records and photo had been posted on a Web site called Missionaries to the Unborn.

Posting photos of women entering and exiting clinics is the radical antiabortion movement’s latest step in an increasingly sophisticated campaign to use the Internet to target abortion clinics. “For a long time, the focus was on putting up information on doctors and personnel, but now we’re seeing patient information, too,” said William Lutz, communications director of the National Abortion and Reproductive Rights Action League. “The fringe and extremist antichoice groups and individuals are always pushing the envelope legally.”

Antiabortion activists embraced the tactic last spring after a federal appeals court ruled that Neal Horsley’s notorious Nuremberg Files Web site-which lists the names and addresses of abortion providers and shows their names crossed off after they have been killed-is protected by the First Amendment. Encouraged by the finding, last April Horsley started a site called AbortionCams that posts photos of “homicidal mothers” gathered from “photojournalists” who lurk outside clinics, taking photos of patients. Two months after AbortionCams debuted, the Missionaries to the Unborn site featured the Illinois patient’s photo and medical records.

The Hope Clinic and its patient have now filed an invasion of privacy suit against the Michaels and the Web site’s owner. But although an Illinois circuit court ordered that the site remove the photo and records until the case is decided, photos of dozens of other patients taken outside clinics in 23 states remain posted on AbortionCams.

The Illinois case is the first time these tactics have been challenged in court. Legal experts agree that posting the woman’s medical records-copies of which were leaked to the Michaels from an anonymous source-falls within the established definition of invasion of privacy. But the use of the photo will be a much tougher call; in order for a court to rule that revealing personal information is an invasion of privacy, a plaintiff has to show that someone of ordinary sensibilities would be offended by the revelation. “Unfortunately, there is no current privacy law that specifically prohibits all of this,” said Anita Allen, a visiting professor of law at Yale Law School who specializes in privacy issues.

Pro-choice groups such as the National Abortion Federation say they are watching the situation closely. Meanwhile, Horsley continues to expand AbortionCams: He has been adding photos from new clinics almost weekly and has announced a plan to create a cable television show using video footage from clinics.

He’s also looking for more volunteers to help him. “Get out there to your local butchertorium with your zoom lenses and get those cameras rolling,” he writes on his site. “Point and click.”