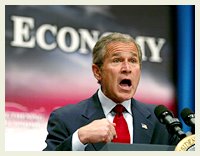 With corporate scandals dominating the headlines, progressive pundits are watching with glee as President Bush tries vainly to distance himself from his longtime allies among the business elite. But those on the left who are busy exulting in the Bush administration’s discomfort should take a lesson from history. Corruption can sink governments, but it doesn’t necessarily float reform.

For a real-world example, see America’s own 1922 Teapot Dome debacle. That corporate scandal rocked the Harding administration and sent Interior Secretary Albert Fall to prison. But the political inheritors of that upheaval were the underwhelming Coolidge and Hoover administrations.

For a more recent example, see Italy’s “Tangentopoli” kickback scandal. Virtually every political party in Rome was implicated, and the government collapsed, but the chaos only led to the white-horse arrival of plutocrat Silvio Berlusconi, no gift to reform.

Now, in Washington, what with the exposure of Enron, Global Crossing, Tyco, WorldCom and their attendant accountants, Republicans are being forced to restate their political earnings. These diehard defenders of deregulation at all costs find themselves challenged to justify the hilarious pretense that they are still “reformers with results.” Surely, the age-old GOP mantra ‘market good, bureaucracy bad’ loses much of its allure when the ‘market’ turns out to be a euphemism for conglomerates and conglomerates turn out to be shell-games run for the enrichment of a stupendously greedy corporate aristocracy.

The market’s bubble has burst, and we’ll soon see how much tensile strength the Bush bubble has left.

In political terms, a sagging White House looks rather promising for the left’s prospects. After months of sycophantic news coverage, during which the president’s occasional delivery of whole sentences were treated as signs of Mature Leadership, we are treated to daily reminders that this president’s pallid palliatives will not move the markets, except possibly downward. Moreover, we are provided daily revelations about Bush, his inner circle and their collective lack of business ethics. Each week, the nation’s newspapers come forward with unremitting investigations of Bush’s slick, slimy history of deal-making and favor-taking — a record that is easily matched by that of Dick Cheney.

This roaring of hitherto stifled sentiments is healthy and welcome, as overdue sanity always is, but it’s not enough.

It’s not enough to beat up on George W. Bush, the whiny rich boy who, thanks to other people’s money, oiled his way into power. It’s not enough to have a few old-time left-wing religionists to flail away at capitalism’s ‘inherent flaws,’ as if some more fruitful economic system were really on offer. What is worth considering is what kind of capitalism we are to have. We know now — if we didn’t know before — what unbridled management looks like. We know the depths of corruption to which it can subject not only employees and stockholders but the citizenry and, often, much of the rest of the world. What we don’t know, at least not yet, is what a more decent system would look like.

Some in Congress have their own ideas on the subject — ideas which are now almost certain to become law. Democrats and Republicans alike are holding forth as champions of reform, adopting hanging-judge rhetoric and promising that recently-approved corporate fraud measures will push corporate America to clean up its act. At the same time, several of Capitol Hill’s stickiest-fingered tycoon-protectors, like Phil Gramm and Dick Armey, are galloping off toward the retirement sunset, hoping to get out of town before the scandal’s stench catches up with them. Democrats, meanwhile, are treading lightly. Many, including the party’s most recent Vice Presidential candidate, Joe Lieberman, have their own closets bursting with disreputable skeletons.

Amid all the posturing and politicking, there is a very real danger that the Democratic leadership in Congress will (to paraphrase Abba Eban’s great mot about the Palestinian leadership) miss no opportunity to miss an opportunity.

Hastening to slather themselves with bipartisanship, and evidently fearing the political fallout of alienating the nation’s wealthy (and, with them, the many middle class voters distressingly beholden to the rich), the Democratic leadership, has rushed the issue. Instead of peeling back the many layers of the accounting scandal, they have narrowed the focus to useful but minor rule changes, increased investigative scrutiny and gangbuster criminal sentences. They have wagged their fingers at a handful of stupendously greedy CEOs, but they have left untouched the deregulatory fever that unleashed them. Instead of seeking to untangle an interlocked system of bent regulations, easy taxation, and accounting hustles — a system which allowed the ratio of CEO-to-employee income to grow from roughly 45-to-1 at the start of Reagan’s reign to some 450-to-1 twenty years later — the Democratic leadership has gone looking for crooks to lock up.

What’s more, the Democratic leadership has backed off the central question of social goals — and how the warped market system can be straightened to better support the fundamental goal of equality.

Now, it’s quite true that Americans don’t want a ceiling on income, let alone dollar-to-dollar equality. Even at the peak of the depression, when FDR actually called for a ceiling on salaries, huge majorities opposed it. In more or less prosperous times, the poor like the rich want to be able to pass on an inheritance untaxed — never mind that most legacies are pittances. Still, the American version of equality is fairness, and the spectacle of top Enron executives making off with hundreds of millions in stock profits while most of their employees watched their retirement funds melt away should be truly revolting to any honest person, whether they consider themselves progressive, liberal, moderate or conservative.

Corporate criminality will surely be trimmed as a result of the congressional action, but the debate about economic reform has been pathetically narrow. Corporations are sanctioned by governments, not the other way round. Governments have the right — and, in the name of the public good, the responsibility — to determine how corporations shall govern themselves. There is a growing, and welcome, call for a shareholders rights movement, the central pillars of which are greater financial transparency and greater director responsibility. But why should shareholders be considered the only stakeholders, when corporate power ramifies so widely? Why shouldn’t unions have votes on corporate boards, as in Germany? Why shouldn’t representatives of other involved parties — such as neighbors, pensioners, and environmentalists?

After decades of rampant deregulation, this is one of those moments when serious reform might be possible. Do we want to leave matters to the tender ministrations of Senate and House committees while ranting away against capitalism? Alan Greenspan and, yes, Dick Cheney are attacking the menace of corporate greed. That public battle is won. We must not be satisfied by the bad-guy hunt and the easy gestures. We must educate ourselves about proper corporate governance, and we must open up that debate. If the left doesn’t, who will?