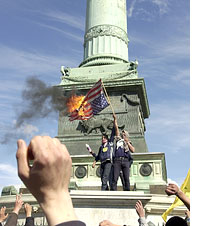 Not since the last big bank loan to Argentina has credit been squandered as rapidly. In less than a year, the administration of George W. Bush has frittered away the global capital that came America’s way after the massacres of Sept. 11. And to what end?

For reasons good and bad, people love to hate, love, and be transfixed by America. So it was not altogether predictable when, as the acrid stench still hung over lower Manhattan last September, millions of people on every continent stood up to declare that they identified with America and Americans. In candlelight vigils and front-page headlines, they declared a common humanity.

To find this solidarity, people had to nudge their grievances to the side — and everyone has grievances against the imperial center. Still, millions of people did nudge their grievances aside. They did so spontaneously and, I think, sincerely. It was as if the awfulness of the events drove them to not only share in the loss, but to remember who they were — and to draw a sharp existential line: On one side, the best of the American idea; on the other, the abyss of apocalyptic violence.

The outpouring of human solidarity was all the more impressive because the Bush administration had already attracted considerable international ire as of last September. Washington’s go-it-alone crusades — its rejection of the Kyoto Protocol and the international bioweapons treaty; its antipathy to the International Criminal Court and undermining of the Anti-Ballistic Missile Treaty — had branded the administration with a blustering imperiousness so unremitting in its unilateralism, so contemptuous of the moral imperative defined in the Declaration of Independence as “a decent respect to the opinions of mankind,” that it seemed as though Bush had been in office for 9 years, not a mere 9 months, when the fuel-and-passenger-heavy jetliners exploded us into a new epoch.

With a single stroke, Osama bin Laden gave anti-Americanism a bad name. Today, anti-Americanism is back in vogue, the good will is gone, and the White House seems fixated on digging the hole deeper. In the clumsy prefab phrases uttered by this Commander-in-Chief, references to allies are perfunctory. Monumental arrogance is not just the hallmark of this administration’s foreign policy — it is their foreign policy. Their thuggishness does not embarrass them. In the collective mind of this Axis of the Primeval — the tiny neo-conservative circle that has seized control of the nation’s foreign and military policy machine — doubt is the squeak of the pathetically spineless and dissent is the cry of the dangerously unpatriotic.

The effects of this myopia can be seen everywhere. In Afghanistan, where the casualties brought about by US attacks may or may not exceed the Sept. 11 death toll, the American commitment to fostering democracy and building a lasting peace is puny. In the Middle East, Team Bush is glued to Ariel Sharon, whose idea of diplomacy is a battering ram. Most recently, in Iraq, the administration has shown itself to be hapless as well as thuggish. In its current maneuvering against Saddam Hussein, Washington has not one ally — an amazing achievement on the heels of the nearly-unanimous support given to the attacks on Afghanistan’s Taliban regime.

Until recently, the Bush gang at least had the American people and their representatives in Congress cowed. No longer. Republican reliables like Brent Scowcroft, pressed into service as family retainer, are going public with rational doubt: What the hell do you think you’re doing charging into a reckless war that no one else in the world finds convincing or sensible?

If there’s any logic at work in the White House — a dubious proposition — it might be a recycled version of the “madman” policies adopted by the Nixon administration. Nixon seemed to think that he could intimidate Hanoi if they thought him capable of anything. Such wildness might appeal to Bush, whose personal history — from decades of drunkenness and shady business bailouts to political cronyism and a stolen election — appears to have taught him that he can get away with anything.

Thundering on about Manifest Destiny and preemptive glory, Bush sounds almost articulate — it is the only talk he seems able to spit out without stumbling.

Read those lips, Saddam Hussein. The man’s sheer recklessness has not been lost on informed Europeans, Latin Americans, and others. The soft anti-Americans, easy to dismiss after Sept. 11, have been superseded by hardheaded critics demanding our attention. The complaints are no longer reflexive and petty; rather, they are provoked by 12 months of Washington’s illogic and arrogance.

What an awful defeat for America’s friends.

What a gift to al-Qaeda.