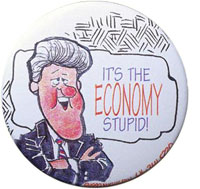 An updated version of the Reagan Democrats, these swing voters tend to support Republican candidates in national elections, particularly when the key issue is managing the economy. The reason is simple: As a recent CBS/N.Y. Times poll found, a majority of voters believe that Republicans are better at managing the economy. I’ve heard the same basic argument — that the Democrats have better social programs but the Republicans are better managers of the economy — more often than I’ve heard Judy Garland sing “Over the Rainbow.” But is that argument based in fact?

It would seem to be a question Democrats should probe. After all, the stakes are exceedingly high this year. On November 5, voters will elect all 435 members of the House of Representatives, one-third of the Senate, and the governors of critical states like California, New York, Texas, Pennsylvania, Illinois, Michigan, Iowa, Wisconsin, and Florida. And, at this point, polls indicate that the economy is the dominant issue for voters once more.

Unfortunately, there is little indication that the question will be examined in a full, open, and honest debate this fall. Twenty-two years ago, we entered an entirely new phase of campaign politics. The focus now is on who can package the best campaign image, rather than who can demonstrate the most competence and capacity to govern. Our country’s political, economic, and social life has been reduced to a battle of fifteen-second sound bites and thirty-second commercials, with results reported like a football score.

Ronald Reagan, in the 1980 presidential campaign against Jimmy Carter, reduced the debate to a mantra-like question: “Are you better off today that you were four years ago?” In 1992, Bill Clinton defined it as: “It’s the economy, stupid.”

Welcome to the Economic Sweepstakes Quiz. The rules are simple. Guess which president since World War II did best on these eight generally accepted measures of good economic management. You can choose among five Republicans (Eisenhower, Nixon, Ford, Reagan, and poppa Bush) and five Democrats (Truman, Kennedy, Johnson, Carter, and Clinton).

If this isn’t enough to destroy the myth that the economy has performed better under Republicans, consider that the stock market has historically fared better when a Democrat is in the White House. During the 20th century, The Dow Jones Industrial Average rose, on average, 7.3 percent per year under Republican presidents. Under Democrats, it rose 10.3 percent — which means investors gained a whopping 41 percent more. And that figure is even higher if you factor in last year’s nose-dive.

So that’s the historical record. What about today? How does the economic management style of George W. Bush measure up?

In 1980, George Bush the elder showed rare insight when he called supply-side policies “voodoo economics.” Of course, he promptly embraced the very policies he derided in order to become vice president and, later, president. The royalist economic policies of the Reagan and first Bush administrations were total failures — a fool’s paradise built on the sands of borrowed time and borrowed money. The consequences were a staggering national debt, industrial decline, shrinking wages, two painful recessions, increased poverty, and structural unemployment. The reckless spending and borrowing of the Republican Reagan-Bush years brought us to the brink of depression.

Enter Bill Clinton, Democrat. The Clinton-Gore administration presided over the longest peacetime economic expansion in our history. The national debt was reduced dramatically, the industrial sector boomed, wages grew and more Americans found jobs. Democratic leaders in Congress pledged to spread that prosperity further, maintaining benefit levels and expanding eligibility for the Earned Income Tax Credit. Moreover, led by their leaders in the House and Senate — Dick Gephardt and Tom Daschle — the Democrats vowed to hold the line on tax fairness.

That all changed, of course, with the election of Bush the younger. George W. has returned to the orthodox, trickle-down economic policies of his conservative predecessors. Claims of compassion aside, Bush has emerged as nothing more than a supply-sider in the mold of his father and his father’s former boss.

The Bush administration, supported by Republicans and more than a few Democrats on Capitol Hill, pushed through a sweeping tax cut, under which the wealthiest one percent of Americans reaped 43 percent of the gain. In the months after the vote, the Bush administration predicted that the federal government would see a $150 billion budget surplus this year. On July 12, the White House reported that we will instead run a $165 billion deficit. In less than a year and a half, the federal government’s 10-year projected budget surplus of $1.6 trillion has vanished. One recent analysis predicts soaring deficits of over $100 billion each year for the rest of the decade.

This dramatic reversal is, to a great extent, the direct consequence of the enormous 10-year, $1.35 trillion Bush tax cut. Of course, the Bush administration has an answer for the nation’s economic woes: more tax cuts. Bush claims that the tax cuts have little to do with our economic woes. Since his Economic (Potemkin) Forum, he’s been trying to shift the blame for the country’s economic problems to the Sept. 11 attacks and the recent epidemic of corporate malfeasance. Never mind that the Center on Budget and Policy Priorities, as well as other objective and independent watchdog groups, point to the existing tax cuts as the culprit.

In denying the tax cut’s role in the nation’s woes, the administration is trying to cook the books — not unlike Enron, WorldCom, and Arthur Andersen. Bush’s tax cuts are the political equivalent of snake oil. And as my grandfather used to say, “Snake oil sells but it doesn’t cure.”

Back during the 2000 campaign, Bush and Vice President Dick Cheney took pains to brag about their CEO credentials. We’ve since learned exactly what kind of real world skills the pair picked up: Fudging, manipulating, wheedling government contracts and favors, and generally working the system for all it was worth. Bush and Cheney have been schooled in a corporate culture that believes success is achieved by exploiting the government, the economy, and the environment. They have brought that same culture with them to the White House, treating the national treasury like a personal piggy bank to quietly reward the same CEOs they have so loudly attacked in the mainstream press.

There’s an old saying in Las Vegas where, unlike Washington, they can’t change the bottom line for political convenience: “Figures don’t lie, and liars figure.” One must seriously wonder if Bush’s obsession with Iraq, so close to the midterm election, is not a calculated smokescreen designed to distract the media and the public from his administration’s disastrous economic policies.

One only hopes that the office park dads begin to understand how the game is played as well as the soccer moms already have. We need genuine leadership in Washington. We don’t need another two years of George W. practicing Reaganomics II. We don’t need more quick-fix schemes or lopsided tax cuts. We need a Congress that understands and believes in coherent, comprehensive and equitable policies that promote sustainable economic growth — and, on that count, Democrats have the winning record.