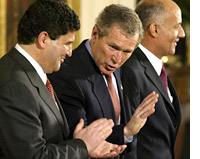 As the nation’s premier research center, the National Institutes of Health is supposed to be insulated from politics. The agency has long appointed respected health professionals — regardless of their political beliefs — to advisory councils that help direct the nation’s medical research on everything from genetic disorders to the common cold. “The NIH casts a broad net and deliberately creates a diverse council that can give them input,” says Steven Hayes, a University of Nevada professor who sits on the National Advisory Council on Drug Abuse at the NIH.

But the Bush administration has been screening candidates about their political views — an unprecedented move intended to make sure that conservatives get seats on NIH advisory councils. In some cases, Mother Jones has learned, a White House liaison with the Department of Health and Human Services, which oversees the NIH, has called candidates and asked detailed questions about their political leanings.

One candidate screened by the White House was William Miller, a widely respected researcher and professor at the University of New Mexico who was nominated to serve on the advisory council on drug abuse. Miller says he’s never been secretive about his politics. “If somebody started digging, they wouldn’t have to dig too far to find out I’m a lifelong liberal,” he says. “I’ve never been arrested or joined the Communist Party — I’m just what Garrison Keillor calls a ‘museum quality’ liberal Democrat.”

That apparently was enough to trigger alarm bells at the White House. Last January 15, a liaison staffer interviewed Miller by phone. According to Miller, the staffer told him that he needed to determine whether Miller held “any views that might be embarrassing to the president.” He began by asking Miller’s views on drug legalization and needle exchange; when Miller responded that he was opposed to the former and in favor of the latter, the staffer replied, “You’re one for two.” The staffer then asked a series of questions that had no apparent relevance to Miller’s qualifications to serve on the council: Did he favor capital punishment for drug kingpins? (No.) Was he opposed to abortion? (No.) Had he voted for Bush? When Miller replied that he had not, the staffer asked him to explain why he “hadn’t supported the president.”

Miller says he was “surprised and aghast” by the questions. After the interview ended, the staffer told Miller that he would get back to him after checking to see if his views were “acceptable.” Miller never received a second call.

Several prominent conservatives had no such difficulty, however. Among those named to the drug-abuse advisory council was Robert Woodson, whose National Center for Neighborhood Enterprise provides training to faith-based organizations. The organization is heavily funded by the Bradley Foundation, which also bankrolls the Clinton-bashing American Spectator. Another member of the panel is Peggy Sapp, who sits on a drug-abuse advisory council in Florida appointed by Governor Jeb Bush. Sapp, who directs a national network of parenting organizations, is the only member of the 18-member council without an advanced degree. Several conservatives, including a college friend of the president, were also appointed to the NIH’s National Mental Health Advisory Council.

Bill Pierce, a spokesman for the Department of Health and Human Services, insists that it is accepted practice to select scientific panelists based on their politics. “Every president does it,” he says. “It goes back to George Washington. I can’t say that past administrations have asked the same questions, but the end result is the same — you put people on boards that you want.”

But current NIH staffers and former top officials say the political screening represents a marked departure from past practice. “That’s absolutely unusual — are you kidding?” says Steven Hyman, former director of the National Institute of Mental Health and now provost of Harvard University. “Politics should be irrelevant to science.”

Others familiar with the process agree. “No one around here has ever heard about this type of questioning,” says an NIH official who asked not to be identified. “I don’t see how it’s supposed to help further our scientific research.”

The NIH’s advisory councils are designed to provide the government with impartial, professional expertise on a wide range of medical research. Panel members are often asked to make recommendations on policies and funding involving controversial issues — including aids treatment, medical marijuana, and drug testing on human subjects. Some involved in the process say that screening candidates threatens to place the president’s views over scientific evidence. Miller, for example, says the White House liaison told him that his support for reducing the spread of HIV by providing clean syringes to drug addicts was a strike against him because the president is “morally opposed to needle exchange.”

Not every candidate was screened, and health professionals with liberal views were appointed to NIH advisory councils. But even those who were not questioned about their politics express concern about the practice. “It sounds intimidating to the candidate — and it’s intimidating just to hear about it,” says David Vlahov, who was nominated to the drug-abuse council under Clinton and approved under Bush.

For their part, some NIH staffers say that the screening has made them reluctant to consult the advisory councils. “You have to be worried about what their politics are,” says one staff member. “You want to ask them their opinion, but you need to keep them at arm’s length because they might be pushing a particular agenda.”