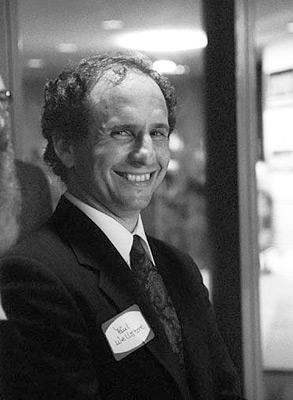 I was on my way to the photo lab when I heard the first report of a plane crash in northern Minnesota. The reporter said the plane was leased to the Wellstone campaign, but it wasn’t known who was on board. Moments later came the news that Paul was on the passenger list. Within minutes came the news that Sheila, and their daughter Marcia, were also on board.

I spent a lot of time with Paul during his first two campaigns, but I had not been out with him this year. I was clearing my schedule so I could do so during the last week of the campaign. That’s where I ended up, but I was not photographing what I thought I would be.

I was so proud of his speech in early October, and of his stand against the war with Iraq. It was Paul at his greatest. I was going to email him, but I decided to wait until I saw him in person.

The energy I saw at the campaign office this year was the same energy I remembered from 1990 — a young, committed staff, working for someone they passionately believed in. It always felt more like a grassroots organizing project than a senatorial campaign. Some of the younger staffers remembered when their parents worked with Paul the first time he ran.

More and more, as I look over ten years of photos, I keep coming back to this one as my personal favorite. To me, it is loaded with images of the hope that surrounded the campaign. So many people felt unrepresented and they were looking for leadership, looking for someone to speak for them.

Paul loved going to coffee shops. This picture was taken just as he was leaving one, in Virginia, a mining town on the Iron Range. He connected so intensely with people. Not any group in particular — he struck a chord with farmers and students and laborers and small businesspeople. People who worked hard to put food on the table. Most of them called him Paul.

It had been Paul’s idea, of course, to buy an old school bus, paint it green, and travel across the state. It broke down a lot, and that in itself was something people could relate to. There were tables and sofas inside, and a speaking platform off the end, like an old-fashioned train. The day Paul’s plane crashed, the bus was headed to his next campaign stop to meet him.

He touched people literally and figuratively. He shook many hands, but mostly he would hug. He was a great orator, but his main strength was that he also listened.

In 1990, none of the political or media insiders thought Paul had a chance of wining against Rudy Boschwitz, an incumbent senator who was one of the top fundraisers in the Senate. I remember how strange it was for everyone, probably even for Paul. I was in a bit of shock, and I realized that I had never before voted for anyone who had won.

The victory in 1996 had a different feel, though the candidates were the same. Paul now was the incumbent and had been able to raise much more money, but Boschwitz was still a formidable adversary, and many believed that 1996 would reverse the “fluke” result of 1990. It didn’t.

I was personally disappointed in Paul Wellstone only once, and that was when he voted in favor of the Defense of Marriage Act. It was shortly after that vote that I took this photo of him leaving the Minneapolis Gay Pride Celebration. Paul had been in the parade and had just finished speaking and was about to leave. Suddenly a man approched him and grabbed his arm to talk to him. I noticed his “I Vote” sticker.

I saw this variations on this scene, at St. Olaf College in southern Minnesota, a thousand times on the campaign trail. Wellstone would rage and spit and sweat giving a speech, and the kids responded as if it was at a rock concert. Except perhaps for Jesse Jackson, I’ve never seen another politician who got such a strong emotional response.

On October 25, I arrived at the campaign headquarters moments before the names of the victims were released. After the press conference, someone announced that there would be a candlelight vigil in back of the office in the parking lot. People were sobbing, including me. And then everyone just started writing messages on blank sheets of paper, campaign signs, whatever they could find, and attaching them to the chainlink fence.

The crowd grew throughout the day, and people started bringing offerings. There were children’s photos, poetry, newspaper clippings, a postal worker’s shirt with a message of thanks. Some vets came and left their medals. When I first saw the work boots and hard hat, with a single rose placed in the empty boots, I cried yet again.