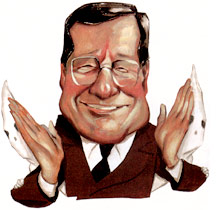 1968 — Begins his political career as administrative assistant to US Rep. William M. Colmer, a one-time Dixiecrat and staunch segregationist.

1972 — Elected to the US House of Representatives, taking over Colmer’s seat–with his mentor’s blessing–as a Republican.

1980 — At a rally for Ronald Reagan in Jackson, Miss., Lott praises Thurmond much as he will 22 years later.

“You know if we had elected this man 30 years ago, we wouldn’t be in the mess we are today.”

“Look at the cost involved in the Martin Luther King holiday and the fact that we have not done it for a lot of other people that were more deserving.”

1984 — In an interview with Southern Partisan magazine, Lott explains why he opposed expanding the Voting Rights Act.

“They are still trying to exact Reconstruction legislation that is just not fair.”

1984 — In a speech to the Sons of Confederate Veterans in Biloxi, Mississippi, Lott sells the Party of Lincoln.

1992 — Delivers a keynote address to the Council of Conservative Citizens, the successor to the segregationist White Citizens’ Councils of the 1960s.

“The people in this room stand for the right principles and the right philosophy. Let’s take it in the right direction, and our children will be the beneficiaries.”

1996 — Votes no on the Employment Non-Discrimination Act (ENDA), which would have prohibited job discrimination based on sexual orientation. He argues:

“Its goal is not fairness for individuals. Its goal is social revolution…. ENDA is part of a larger and more audacious effort to make the public accept behavior that most Americans consider dangerous, unhealthy, or just plain wrong.”

1997 — Chosen by Senate Republicans to be Majority Leader.

1997 — In an interview with Time, Lott acknowledges that he supported segregation while a student at the University of Mississippi.

“Yes, you could say that I favored segregation then. I don’t now… The main thing was, I felt the federal government had no business sending in troops to tell the state what to do.”

1997 — When asked why his name was included among informants and other “state actors” in the sealed files of the Mississippi State Sovereignty Commission — a state segregationist spy agency — Lott replies awkwardly:

“I don’t have the foggiest idea. I’ve never heard such a thing and never was involved in any way and don’t have any idea. I suspect that even if it is true, I mean that could involve, you know, preachers, newspaper reporters, whatever. I really don’t know anything about it.”

It is later revealed that Lott had written a letter to Sovereignty Commission director W. Webb Burke in 1969 on behalf of Colmers. Lott expressed his gratitude for a “resolution passed by your commission commending the Mississippi congressional delegation for their interest in requesting a full-scale investigation in the mysterious death” of a white marine in Vietnam. The marine had allegedly been shot by minority soldiers for wearing a Mississippi flag on his fatigues.

“Trent Lott is one of our members. He’s been a member for a long time.”

1998 — Asked whether homosexuality is a sin, Lott replies:

“Yes, it is.” He goes on to compare gays to alcoholics and kleptomaniacs, but says, “You should not try to mistreat them or treat them as outcasts.”

1999 — Lott refuses to allow a Senate hearing on the nomination of James Hormel, a gay man, to be Ambassador to Luxembourg.

“This group harbors views which Senator Lott firmly rejects. He has absolutely no involvement with them either now or in the future”

2000 — Lott Votes no on expanding hate crimes to include those based on sexual orientation. Czwartacki explains:

“Our point is that every crime is a hate crime.”

2001 — Lott is the only senator to vote against the confirmation of Judge Roger Gregory, who became the first ever black judge in the US Fourth Circuit Court of Appeals.

Nov 8, 2002 — In an interview about immigration on FoxNews, Bill O’Reilly asks Lott:

O’REILLY: Why not back up the Border Patrol with the military, whether it’s National Guard or straight troops? Why not do it?
LOTT: Well, I think we should do it.
O’REILLY: Do you really?
LOTT: …Oh, absolutely.
O’REILLY: You’re the first politician I’ve heard…
LOTT: Look, most politicians run around worried about civil libertarians and being sued by the ACLU.

WHEREAS Sen. Trent Lott of Mississippi this month publicly and courageously called for placing U.S. troops on the border to protect our country against the invasion of illegal aliens
NOW THEREFORE BE IT RESOLVED that the Council of Conservative Citizens commends Sen. Lott for his statement and that The Council calls on President Bush to fulfill his constitutional duty and place U.S. troops on the border to halt the invasion of the United States by illegal immigrants.

“We’re proud of it. And if the rest of the country had followed our lead, we wouldn’t have had all these problems over all these years, either.”