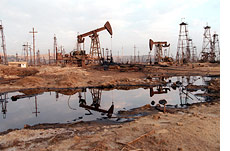 The pipeline will begin on the outskirts of Baku, where oil rigs rise from the Caspian Sea and the hazy yellow sky reeks of petroleum. From the capital of Azerbaijan, it will cross more than 1,000 miles of rough terrain, stretching through Georgia and Turkey. When it is completed, it is expected to provide Western markets with 1 million barrels of oil a day — and to provide a gusher of profits to the consortium of 10 companies headed by British Petroleum that is developing the project.

But regional conflicts and uncertain production make the $3.5 billion pipeline so risky that the oil executives who devised the venture don’t want to pay for it — and the commercial banks they normally deal with don’t want to lend them the money. So the oil companies are turning to another big lender for help: Uncle Sam. The U.S. government, which helped broker the pipeline deal and has paid for engineering studies in Azerbaijan, is expected to provide as much as $500 million this year to help finance the project, supplying some of the world’s wealthiest companies with what British Petroleum CEO John Browne calls “free public money.”

The Baku pipeline is hardly an isolated example. Under the energy plan developed by Vice President Dick Cheney, the Bush administration is financing a growing number of overseas projects for private oil companies. In theory, the money provided by two U.S. agencies — the Export-Import Bank (Ex-Im) and the Overseas Private Investment Corporation (OPIC) — is supposed to boost trade and create jobs. But in practice, say critics across the political spectrum, the agencies enrich a handful of well-connected oil companies. “The majority of Ex-Im Bank funding benefits large, politically powerful corporations,” says Rep. Ron Paul, a Republican from Texas.

The roster of those receiving government financing over the past year certainly includes some of the country’s largest oil and gas companies. In Baku, financing for the pipeline will assist two U.S. oil giants, Unocal and Amerada Hess. In Indonesia, where Bush promised increased U.S. financing to secure support for his war on terrorism, OPIC loaned Unocal $350 million to develop an oil and gas field. In Russia, OPIC provided

116 million in loan guarantees to Marathon Oil and Royal Dutch/Shell for a project off Sakhalin Island, and Ex-Im pledged $300 million for several other private oil projects. And in Nigeria, the export bank provided $135 million in October to help a subsidiary of Halliburton — the company where Cheney served as CEO — expand a natural-gas production facility. Over the past decade, the two agencies have provided $32 billion in loans and guarantees for corporate energy projects. Intent on expanding oil reserves beyond the Middle East, President Bush has nearly doubled the Export-Import Bank’s authority to assume debt, to $100 billion. “Obviously, the U.S. government is looking at alternative sources of oil to diversify our consumption,” says Bo Ollison, a spokesman for the agency. “We are part of the strategy.”

But while the government is helping oil companies tap new markets, the public financing is doing little to achieve its stated goal of creating jobs. Since 2000, the two largest oil companies subsidized by Ex-Im — ExxonMobil and ChevronTexaco — have actually slashed their workforces by more than 20,000. Oil and gas companies that apply for financing are not required to submit any information on the economic impact of their projects, and many of the documents they do provide are kept secret even from those charged with monitoring the agencies. “We don’t have a lot of confidence in the process,” says Thea Lee, the AFL-CIO’s chief international economist, who sits on an Ex-Im advisory committee. “There’s simply no way to know whether it’s helping support U.S. jobs.”

Overseas, the loans contain no safeguards against corruption or human rights abuses, and applicants do not have to meet even the minimal environmental standards mandated by the World Bank. The Unocal project in Indonesia has polluted rice fields and fishing waters; when residents held a protest in October 2000, state security forces shot and beat nearly two dozen demonstrators. In Cameroon, where ExxonMobil has received $500 million in U.S. financing for a pipeline, international observers say the project has destroyed rainforest and fueled a public health crisis. And in Russia, environmentalists warn that oil projects off Sakhalin Island threaten 11 endangered species, including the Western Pacific gray whale.

In Azerbaijan, where the U.S.-backed pipeline broke ground in September, the CIA reports that “corruption is ubiquitous.” Few observers expect the project to help the nearly two-thirds of Azeris who live in poverty. “People are afraid the pipeline won’t benefit them,” says Farda Asadov, director of the Open Society Institute’s office in Azerbaijan.

Given Bush’s oil agenda, however, the flow of tax dollars to support such projects is likely to increase. In October, the president nominated Philip Merrill, the publisher of Washingtonian magazine and a major Republican donor, to chair the board of the Export- Import Bank, which after January will be filled exclusively with Bush appointees. And those looking for reform from a new advisory committee created to shift Ex-Im’s financing toward renewable energy sources are likely to be disappointed. To head the Renewable Energy Exports Advisory Committee, Bush has named W. Henson Moore, a board member of the world’s largest supplier of uranium for nuclear power plants.