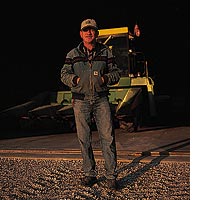 From early spring to harvesttime last year, Iowa farmer Bill Horan watched over a small plot of corn that grew behind an electric fence, bordered by a moat of fallow earth, a quarter mile from the next cornfield. The plants in the high-security field had been genetically engineered — not to grow taller or to defeat pests, but to produce a human enzyme, lipase, used in treating cystic fibrosis. And to Horan, a fourth-generation family farmer, those rows of stalks represented the future. “Biotechnology is going to take the plywood down from Main Streets in rural America,” he predicted.

“Pharming,” the practice of altering corn, tobacco, and other plants to make drugs for humans and animals, has been getting a lot of attention in the biotech industry — and attracting plenty of controversy. Last year, pharmaceutical crops were being grown in some 350 test plots around the nation, and it’s estimated that pharming could become a $12 billion industry within the next three years. Researchers and companies say the crops could make drugs cheaper and more available, but critics — including environmentalists and grocery manufacturers — warn that the technology is being rushed to production without sufficient regulation. Caught in the middle are small and midsize farmers, desperate for a crop that could, for the first time in years, help them turn a profit.

Clearly, traditional commodity farming can’t save the Corn Belt. As corn and soybean farms have grown, profits have shrunk to the point where most growers are kept afloat only by government subsidies. The landscape near Horan’s farm is dotted with empty buildings and ghost towns; in nearby Rockwell City, the self-proclaimed “golden buckle of the Corn Belt,” the last new house was built two years ago, and the Presbyterians have had to move in with the Lutherans because they can no longer afford their own church. “No one is making money around here,” says Neil Oswald, a John Deere dealer in nearby Manson, noting that in a good year, farmers can expect to invest $320 an acre for a harvest worth $350 an acre.

By contrast, pharmaceutical crops could fetch yields up to $15,000 an acre — and, Horan notes, these “boutique” crops don’t need much space. “Biotech rewards management, not size,” he says. “A 500-acre farmer or a 5,000-acre farmer can both play in this game. We don’t have to keep making farms bigger and bigger, which means that there are fewer and fewer people supporting our rural churches and schools.”

Small farmers may also be better suited than giant agribusinesses to the intensive monitoring pharmacrops require, says Tom Slunecka of the National Corn Growers Association. And it’s not just farmers who could benefit, he adds; high-tech processing plants “could be very profitable within rural communities.” Right now, Iowa exports college graduates; pharmacrops, Slunecka maintains, could bring some of them back.

For now, most of the new crops are being grown on plots managed by pharmaceutical companies and universities. But for the past eight years, Horan — who, along with his brother, is the first individual grower to hold a U.S. Department of Agriculture permit to grow drugs for humans — has been working to change that. He entered farm politics, became president of the Iowa Corn Growers Association, and assembled a cooperative of fellow Iowa farmers interested in growing pharmacrops. He’s traveled to Washington to meet with regulators, and to France to win a contract to grow the lipase corn for the biotech company Meristem. Armed with PowerPoint slides and his just-folks Midwestern drawl, he speaks at conferences of grocery manufacturers and seed companies, arguing that pharmacrops present an opportunity, not a danger, for the nation’s breadbasket.

At dusk on a chilly October day, Bill Horan drove his “cowboy Cadillac,” a big, red Chevy pickup, to a spot 1,300 feet away from his one-acre lipase plot; outsiders were allowed no closer. The corn was surrounded by 100 feet of bare earth and lay in the midst of 440 acres of soybean fields. To prevent pollen drift, the corn had been bred to be sterile; for extra protection it was planted six weeks after the other corn in the state had pollinated. In a few days, Horan would harvest the crop with a special combine and transport it to a locked barn, burning any discarded material and plowing over the test plot to bury any dropped kernels. Come spring, he said, he’ll go back and spray any stray sprouts with Roundup.

There is good reason for all those protections. Last fall, the pharmacrop industry’s worst nightmare came true when an ounce of pharmaceutical corn was found mixed with soybeans in an Aurora, Nebraska, grain elevator. ProdiGene Inc., the company that owned the escaped corn, was ordered by the usda to destroy 500,000 bushels of soybeans and pay a $250,000 fine for violating safety procedures. The incident amplified concerns that with “just one mistake by a biotech company, we’ll be eating other people’s prescription drugs in our cornflakes,” as Larry Bohlen of Friends of the Earth puts it. A report from the Genetically Engineered Food Alert, a coalition skeptical of biotechnology, warns that pharmaceuticals could leach into the soil through plant roots, that sterility measures could fail, or that new genes could add unexpected traits to the crops, turning them into superweeds. Secretary of Agriculture Ann Veneman said in December that she will consider tougher rules on pharmacrops; critics are urging regulators to confine the plants to enclosed greenhouses.

In farm states, the pharmacrop debate has become a major political issue. Last fall, the Biotechnology Industry Organization declared a voluntary moratorium on growing pharmaceuticals in the Corn Belt, then quickly reversed its position after protests from Iowa’s two senators and its governor. Iowa State University’s Research Park plans to build a $15 million facility to extract proteins from genetically modified material; similar efforts are being mounted in Minnesota, California, and other states. “We simply can’t wait until all the questions are answered and all the development work is done,” says Steven Carter, president of Iowa State’s research park, “or all the biotech facilities are likely to end up on the coasts.”

Still, there are concerns that pharmacrops could have a boomerang effect. Growers could be found liable for transgenic pollen drift to neighbors’ farms, warns the trade group American Corn Growers Association, and fear of genetically engineered food still prevails in Japan and Europe. Grain handlers, grocery manufacturers, and food processors “are all saying this is a new technology and they’re just not comfortable with it,” acknowledges Lisa Dry of the Biotechnology Industry Organization. “It’s not agriculture. It’s pharmaceutical production.”

In early December, a Meristem official from France visited Horan’s farm for a top-to-bottom inspection as the company pondered whether to increase his contract to 25 acres, a level nearly sufficient for commercial production of the drug. The inspector, Laure Brien, gave the farm her highest marks. “Everything they did was perfectly done,” she says.