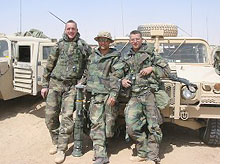 Dispatches from “embedded” reporters — journalists who travelled with American troops, under their protection and sometimes in uniform — dominated U.S. coverage of the war in Iraq. Talk Radio News reporter Gareth Schweitzer, who was with the 3rd Infantry, valued his experience in Iraq but also approached this controversial new type of field assignment with some perspective and distance.

Schweitzer traveled to Iraq with the 535th Engineering Division of the US Army. He was with his unit as they built bridges, established fighting positions, set up equipment and otherwise supported the push forward. Schweitzer, who normally covers the White House and Capitol Hill, spoke with MotherJones.com from his office in Washington, DC.

MOTHER JONES: Did you have any choice about where you were positioned?

GARETH SCHWEITZER: Not initially. At first they pulled us and we had no say where we went. At the beginning they said the unit we had was the unit where we had to stay, but that turned out to not be true. The officers in charge on the ground were more than happy to try to help us move closer to the front.

MJ: Some embedded reporters have written about identifying too heavily with the troops they were with. Do you feel you were you able to get a good perspective on the war as a whole?

GS:A good perspective? It depends on what people were expecting, it worked both ways. Physically, there was a lot of stuff they simply couldn’t not show you. You were riding with them. It was there. There was no way to anesthetize the process. At the same time, on a couple of occasions when I was taken by a colonel to a site he wanted to show me, it was just a PR rap. The army definitely had a message they wanted to get out. At one point, a colonel came back to the unit just to take me and another journalist on a guided tour. He wanted to show us places where Iraqis had been fighting and where they had been sleeping, a weapons dump. I wanted a chance to look at the stuff myself, without the guided tour. But it just wasn’t always possible.

MJ: But how hard was it to be objective about the decisions being made by the troops who were protecting you, possibly saving your life?

GS: You know, anybody who tried to claim that their reporting, as an embed, was unbiased was not telling the truth. Then you’re looking for the wrong thing from the process. At least for myself, I was not trying to be embedded for mere facts. We were getting our information from our own eyes, and from American battle commanders. There’s no way it can be an unbiased process.

I think people were much better off if they took it for what it was — a way to get a look at the way the soldiers live and see some of the things they experienced. It’s almost impossible to have an unbiased perspective, unless you’re outside of the conflict.

MJ: If the embedded reporters only gave one perspective on the war, do you think there were enough other perspectives available?

GS: Well, there were many perspectives among embedded reporters themselves, from the most liberal to the most conservative. It wasn’t exactly uniformity or conformity. But I think it was hard for unilaterals (non-embedded reporters). It was very different for the unilaterals, the Army was not inclined to protect them, they were not inclined to do the same things they were doing for the embeds.

MJ: Now that you’ve been back for nine days or so, has your take on things changed, do you feel any differently about what you saw?

GS: It’s been difficult… On the one hand, we were startled by a number of things that have stuck with us. We were dismayed to see that of the incredible amounts of money spent on the military, how much is spent on offensive weapons and how little is spent to protect the soldiers. There were so many vehicles with no armor protection. We found that some of the marines didn’t have armored plates for their flak jackets until after the war had begun. Near the front, we came very close to running out of water. Other units were running out of food. Some didn’t have usable weapons. Each car was issued two grenades, but for the Marines, there were some close, sticky situations in the Southern provinces. I think if they had been better equipped, they would have been better able to defend themselves and fight. If there had been less of a preoccupation with getting to Baghdad quickly… I don’t know if lives could have been saved, it’s hard to say. But the emphasis was definitely on getting to Baghdad quickly.

It’s the media’s fault, too. A week into the war, they started saying, ‘wait, this isn’t going as planned.’ I don’t know of wars going exactly as planned. But it was, ‘wait a second, it’s taking longer than it should,’ and that kind of attitude drove things into gear. It pressured the military to show movement and progress in the field. That’s very important in modern wars, it seems, the public doesn’t have tolerance for extended casualties, and this is the army’s reaction to how the public sees wars.

MJ: Did the soldiers feel that pressure?

GS: I think a lot of soldiers closer to the front were completely disconnected from any information. I can’t tell you how many times I was asked how soldiers felt about the war coverage back home. But they don’t have TV or radio. Most of their news and info came from me. In terms of how soldiers responded to that… well, they responded to what I told them, but in a war that lasts four weeks, you have very little time. The scale of conflicts is very… short.

MJ: And since you’ve gotten back, what have you thought about the coverage?

GS: What’s struck me is that for a lot of the conservatives who supported this war, validation seems to be in the victory. We prosecute it successfully, we win, and the fact that we win validates us being there in the first place. That makes no rational sense at all. The purpose of our entrance was not to defeat another army but to accomplish a lot of more difficult tasks, none of which have been accomplished, save getting rid of some of the Ba’ath party of Saddam Hussein.

Still, I think what I thought before. I never thought the U.S. was going to lose the military conflict, but I thought that we were getting ourselves into a situation we would find incredibly difficult to resolve. I think few people are accepting the reservations on what American military power can accomplish in terms of the construction of a democratic society. There are great limits on the types of systems we can impose on other people.

MJ: Back to embedding… wouldn’t an ideal situation simply give reporters both their independence and some protection — working on the assumption that the press has the right both to be there and to be independent?

GS: Sure. But would that require that the army provide security for any reporter, anywhere…? Reporters like to go anywhere, but if it’s not safe, does the army have the responsibility to provide for freedom of our press? I don’t know.

And at the same time, some of the reporting I saw was wholly inaccurate, even from reporters who weren’t embedded, in Iraq.

MJ: What’s an example of that?

GS: On a variety of occasions, reporters said that they had stumbled across chemical weapons sites, and it was displayed prominently on TV, on some of the news channels, and it was also broadcast by a number of people. And on each and every occasion it turned out not to be true.

There were also reports of ‘heavy fighting’ up north by the town of Karbala. There was almost no fighting there.

It seems there were no reporters in the units who were the very first to see all of the carnage from some of the heaviest bombings. The reports gave the impression that there were two armies facing off against each other and having a drawn out, protracted fight. Those are two wholly different pictures. ‘They were wiped out in an artillery attack’ is very different from ‘the U.S. won in a battle of very hard fighting around Karbala.’

I think part of it is a problem with the media itself, where people often aren’t reporting from exactly where they say they are. ‘I’m in Karbala’ often means near Karbala, on the outskirts of town. It’s the nearest dateline that they can give. But it’s not close enough, and they haven’t asked the right questions. There was such a rush to get to the front lines, to see who could get the latest scoop, that reporters were getting carried away … and were not as caught up in things that were happening further back.

MJ: What was the best story you got, from being embedded, that you would not have been able to get otherwise?

GS: I think most of them were along the lines of giving a visual. Some of what I was most proud of were the things I was able to describe as we moved. As we crossed the border and came through Southern Iraq, we started to pass Bedouins by the side of the road. I described what the land was like, the Bedouin children getting food and water, how the soldiers responded. People get very caught up in who’s up and who’s down, we launched such and such a number of bombs, this many casualties on one side and on the other… It’s a far different thing to give the image of people on the ground, to see dead people, the people who have been victims of a catastrophic war like this. It’s less about the numbers given by army personnel and more about seeing firsthand what a conflict does to a country. That’s why I was there, and I’m glad I was there.

MJ: So now you’re back to your regular beat?

GS: Funnily enough, I was asked before I went what I thought the dissemination of information would be like in the Army. And I said it couldn’t be much worse than it is in the White House. It could only go uphill, given my regular beat.