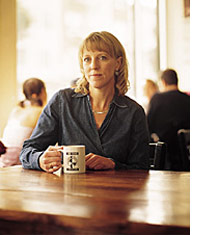 It was right around the time Starbucks started charging almost two bucks for a latte that Kimberly Easson first went to Central America. Working for a coffee company in Costa Rica in 1992, she was stunned to learn that consumers back home were paying more for a single cup of joe than the workers who produced the coffee made in an entire day. “Here were these people who were working so hard, living in incredibly impoverished circumstances, producing a product that Americans can’t live without in the morning,” she recalls. “Something had to shift.”

Meeting with coffee farmers in Nicaragua, Easson discovered that the mountains were full of ancient varieties of coffee that were most prized by connoisseurs. The coffee was grown in the shade — not on deforested plantations — and it was organic by default, since the farmers couldn’t afford pesticides. With other countries growing hybrid strains on land that was cut and cleared, Nicaraguan farmers were sitting on a natural treasure, but no one knew it — least of all, them.

Armed with fluent Spanish and a degree in international business, Easson set out to connect coffee farmers in Nicaragua with coffee buyers in America. With her blue eyes and blond hair, she was an unlikely presence on those farms, especially as a lone woman in her 30s. Working on her own, she brought samples to U.S. roasters, helped growers get organic certification, and eliminated the “coyote” middlemen who buy coffee for a pittance from farmers at roadside stands. Then, in 1998, Easson went to work for Transfair, a fledgling nonprofit in Oakland, California, that wanted to certify and promote “fair trade” coffee. The idea — which was already widespread in Europe — was simple: Tap the growing market of consumers willing to pay a higher price for coffee that protects the environment and ensures growers a living wage for their beans.

The effort to pay farmers more has met with stiff resistance from U.S. buyers. “Coffee is one of the largest traded commodities in the world, after petroleum,” Easson says. “And big businesses don’t usually do things just to be nice.” Procter & Gamble, which she says could easily absorb a fair-trade premium as America’s biggest coffee buyer, won’t return her calls. Even gourmet producers are wary: Easson was dropped from the board of the Specialty Coffee Association and had to fight her way back by petition.

But thanks to Easson’s determination, Transfair now represents 550,000 coffee farmers in 22 countries. “Kimberly is a bridge between two worlds,” says Paul Rice, the group’s CEO. “She has compassion for the plight of the grower, but also has credibility in the industry.” Fair-trade blends are now offered by Starbucks, Newman’s Own, college cafeterias, and even many gas stations. Farmers receive at least $1.26 a pound for fair-trade coffee — roughly twice what they get for uncertified beans — and $1.41 if the coffee is organic. All told, Transfair’s growers have earned an additional $18 million above market rates since 1999 — even as international coffee prices have plunged to their lowest level in a century.

At a fair-trade cooperative in Jinotega, Nicaragua, it’s clear what a difference that extra money makes. During a recent tour, Easson introduced a group of U.S. coffee brokers to farmers who have made the transition to organic farming. In a country devastated by the worldwide plunge in coffee prices, growers in Jinotega have been able to build schools, run clinics, and survive dry spells without having to sell their land. By the time the brokers left, Easson had sold them 75,000 pounds of the co-op’s crop.

Easson acknowledges that convincing Americans to pay more for coffee remains a tough sell. she recently met with Starbucks to persuade them to carry more fair-trade varieties, and she is working to sign up one of the world’s four largest providers — Procter & Gamble (Folger’s), Sara Lee (Superior), Philip Morris (Maxwell House), and Nestlé (Taster’s Choice) — which together buy 60 percent of all U.S. coffee. “We have to make companies understand that what’s good for farmers is good for the quality of their product,” she says. “It’s also good for consumer demand, corporate image, and positive press. The question is, Can we bring the human element into trade?”

Easson takes a sip from her coffee cup. “It’s possible,” she insists. “A few years ago, companies like Starbucks weren’t talking about the environment and about sustainable coffee practices. Now you get that with your latte.”