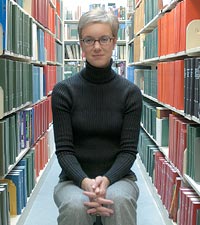 You can ask Trina Magi anything; she’s ready to help you find
the answer. Who, exactly, was on Richard Nixon’s “enemies list”? How do you create a cranberry bog? Where do you find the marketing data you need to write a business plan? How can one find a photograph
of Jesus Christ?

No question is foolish, she believes, though that last one — which
a student truly did ask — still draws a smile. In fact, it’s the very unpredictability of what’s on people’s minds that makes her daily stint on the reference desk at the University of Vermont’s Bailey/Howe Library, in Burlington, so rewarding. “We want to nurture a love of inquiry in others,” she says, “not squelch it or make people afraid to ask questions.”

These days, it’s not people fretting about what she might think of their questions that worries Magi; it’s their unease about what the federal government might think. When the USA Patriot Act passed in October 2001, it contained language in Section 215 making it easier
for federal agents to look into the business records of, among other places, libraries and bookstores. In particular, agents no longer need to show probable cause before getting a judge’s approval to round up private records; the act also makes it illegal for the keeper of those records to tell any one else — including the customer or patron involved — about the investigation.

To Magi (whose last name is pronounced “Maggie”) and other librarians, all of this strikes at the heart of free inquiry: the right to privacy. “It’s one of the basics of librarianship, to respect privacy,” says Gail Weymouth, chair of the Intellectual Freedom Committee of the Vermont Library Association, “to understand that what people read isn’t necessarily what they believe, and to give them the ability to come in and find information without any chilling effect.”

The fear of that chill — the possibility that people will not explore
questions because of how that might look to the authorities — has turned Magi into an anti-Section 215 crusader. A youthful 39, with short blondish hair and a guileless, friendly face reminiscent of the young Debbie Reynolds, Magi is organized, composed, and very straightforward in public — which is where she has been a fair bit over the past year, toting a large flip chart to libraries and public meetings around Vermont to speak about her opposition to Section 215.

In truth, librarians are hardly the only people alarmed by the Patriot Act, which has sparked a groundswell of ideologically diverse opposition. Yet it is the foursquare defiance found in libraries that seems to have nettled the Bush administration most, as suggested by John Ashcroft’s rebuke last fall that the nation’s librarians have fallen
prey to “baseless hysteria.”

Department of Justice spokesman Mark Corallo says that Section 215 simply allows investigators to do what they have been able to do all along — gather evidence. Exempting libraries, he argues, “would create a terrorist safety zone.” But librarians like Magi across the country have rejected this you’re-with-us-or-you’re-with-the-terrorists logic,
buying paper shredders, purging borrowing records, and warning patrons that their records are no longer private.

Go looking for the earliest stirrings of this resistance, and you’ll
be led back to Magi. During the fall of 2002, she met over dinner with fellow UVM librarian Peter Spitzform, former state ACLU head Ben Scotch, and writer Judith Levine. They drafted a letter to Vermont’s
congressional delegation arguing that the Patriot Act threatens “the community of readers, researchers, and information-seekers.” Magi had just stepped down as president of the Vermont Library Association; she took the letter to its executive board and persuaded them to sign on and become the first state library association to go on record opposing Section 215.

“We thought we’d get a nice response saying, ‘Thanks for your
letter, I share your concern,'” says Magi. Instead, the office of Vermont’s lone representative, independent Bernie Sanders, called to say that Sanders planned to introduce a measure to exempt libraries and bookstores from Section 215. “I voted against the USA Patriot Act and knew it was not a good piece of legislation,” he says. “But the truth is, I was not as familiar with all aspects as I should have been.” The librarians’ letter, he explains, along with a similar request
from the New England Booksellers Association, persuaded him to act; so far, his measure has picked up more than 140 co-sponsors from both sides of the aisle.

Magi, in the meantime, is still talking to anyone who will listen about Section 215. Raised as a Seventh-day Adventist, she cut her teeth on protest when she agitated — unsuccessfully — for the church to ordain women as ministers. “I don’t feel uncomfortable about being out here,” she says of her increasingly public role. “We need to have a conversation — we need to have the debate that didn’t happen before the law was passed.”